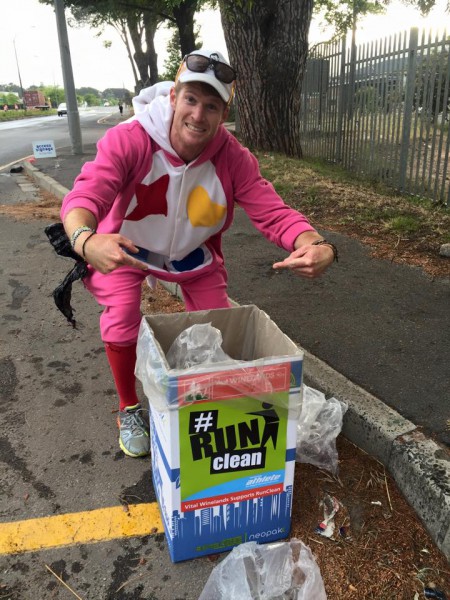 With November’s Vital Winelands Run in Stellenbosch becoming the first road running event to officially pledge support for the Modern Athlete #runclean campaign, athletes were challenged to not only reduce the litter they left on the road, but even to bring their litter to the finish, and two runners really lived up to their promise to #runclean. – BY SEAN FALCONER

Blake Dyason and Robert ‘Brundle’ Le Brun are irrepressibly free spirits, hence they often do crazy things such as running races in ‘onesie’ fancy-dress costumes to raise funds or awareness for a good cause. And so they headed to Stellenbosch in their onesies for the Winelands, only to get stuck in traffic and miss the start. Once they finally got going, they still took their time, because they had decided to support the call by the race organisers to #runclean.

So, Blake and Brundle started picking up empty sachets along the route, especially in areas between water tables where the race volunteers would be less likely to find all the discarded sachets. By the time they reached the finish, after the final cut-off gun, they each had a large bag of rubbish in hand. Unfortunately, only a few people noticed them cross the line, as the final prize-giving was taking place, but they should have received a standing ovation!

Modern Athlete would like to say a huge thank you to Blake and Brundle for leading by example, and we hope their actions will spur other runners on to help clear up the mess, or at least reduce the amount of litter in the roads. We would also like to thank the Vital Winelands Run for coming on board with #RunClean – not only did it lead to more awareness amongst the running community, but also led to more races pledging support for the campaign.

We would love to hear about your efforts to #runclean, so send your letters, photographs or ideas to letters@modernathlete.co.za.

THINK BEFORE YOU THROW – #runclean