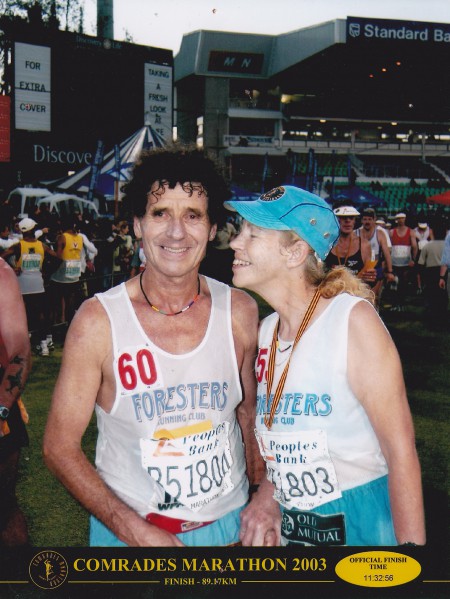 With his thick curly grey hair, 77-year-old Brian Key of Western Province cut a distinctive figure as he came home first male Great Grandmaster in 3:28 at the SA Marathon Champs in Mossel Bay on 26 September. It was his second national title of the year, having already won the SA Half Marathon Champs title, to go with his seventh consecutive 70-79 age category win in the Old Mutual Two Oceans Marathon, where he was also the oldest male participant – and he says he has no intention of slowing down any time soon, because he simply loves his running. – BY SEAN FALCONER

Ever humble about his running exploits, Brian says “it’s not that I am so good, it’s more that others are just not as fast as me any more. I guess I have been lucky with my genes. I am flattered when younger runners ask me for advice, or say they look up to me for still running at my age. I simply tell them to make sure that their running is always fun and enjoyable – that is the secret to running success.”

Music Man
Born in England, Brian is a retired classical musician, having played the Double Bass, and he moved to South Africa in January 1969 after accepting a job to play for the Cape Town Symphony Orchestra. He met his late wife Sonja in the UK one night while playing in a club in Birmingham, and they were together for 47 years before her passing two years ago. Besides playing music, Brian kept himself busy with mountaineering and hiking, trout fishing and later cycling, but he retired his road bike at age 53 when he was hit by a car while out riding.

“I decided the roads were just not safe enough, but five years later I took up running, both on trail and roads. So I was running on the mountain 20 years ago, long before trail running became fashionable.” He ran his first half marathon aged 58, clocking 92 minutes in the Tradouwspas Half. “Then I wanted to do a marathon, so I ran another half in Durbanville, then did the Peninsula Marathon, clocking 3:25. Your first marathon is always exciting, but I didn’t know what to expect with the increased distance.”

He also tried his hand at the Comrades Marathon, running the Down runs in 2003 and 2010. In 2003, he tripped over the cat one day at home and stubbed his toe against the lounge furniture, then limped through the Two Oceans (still finishing in 4:36:52 as third grandmaster), only to find out afterwards he had a broken metatarsal in his foot. “I took some time off running to heal, then ran the Comrades with Sonja at her pace, so it was very stop-start for me as we came home in 11:32. In 2010 I ran my best time of 8:45, but I have to say that I’m not a fan of the Comrades – it’s a great race, but too many people on the road for me, and it’s a hassle to get there, whereas Two Oceans is right on my doorstep.”

Trail Pioneer
While Brian has made a name for himself on the road, his achievements in trail running have also caught the eye. He ran his ninth PUFfeR 80km this year after taking a few years off from this gruelling ultra, and he has also run various multi-day stage races, including the AfricanX, Amatola, Southern Cross and Namaqua Quest. “The Amatola was my first multi-day event, 100km over two days, and I recall we got a bit lost on day one and did an extra 10 kays. I didn’t know how I would be able to run the next day, but I got up and felt OK. I always did the multi-day races with Sonja, and because she was considerably slower than me, I would wait for her. She took up running a bit after me, but we had done a lot of mountaineering together, and she was actually a very fast race walker.”

Another of Brian’s favourites is the Three Peaks in Cape Town, which ascends Devils Peak, Table Mountain and Lion’s Head, and he was due to run his 14th one just after this interview was done. “It’s a nice event because you get to see the other runners all day, with some going up and others coming down the various peaks. I remember in previous years I would finish back down at Green Market Square, then wait for Sonja, only to find her finishing just her second peak, so I would joke with her that I was going home to sleep and she should ring me when she’s done so I can come fetch her. She loved the trails on Table Mountain as much as me, and I think it is wonderful that the Two Oceans Trail Run named a floating trophy for her.”

More to Come
Looking ahead, Brian says he will be running Two Oceans again in 2016, as well as doing his 10th PUFfeR, plus he will be looking for new trail races to explore, and he says he has no problems finding the motivation to keep running at 77. “I just want to keep getting out there, enjoying the fresh air and great views, and feeling good afterwards. I just love being able to run, because it’s such a nice feeling. I have never regretted going for a run, even though some days I might not feel like it, but once you’re out the front door you’re OK. Also, I have met so many great like-minded people, and seen some incredible places, thanks to running. And I love that you can talk for hours about running with fellow runners, even though it is basically just one foot in front of the other.”