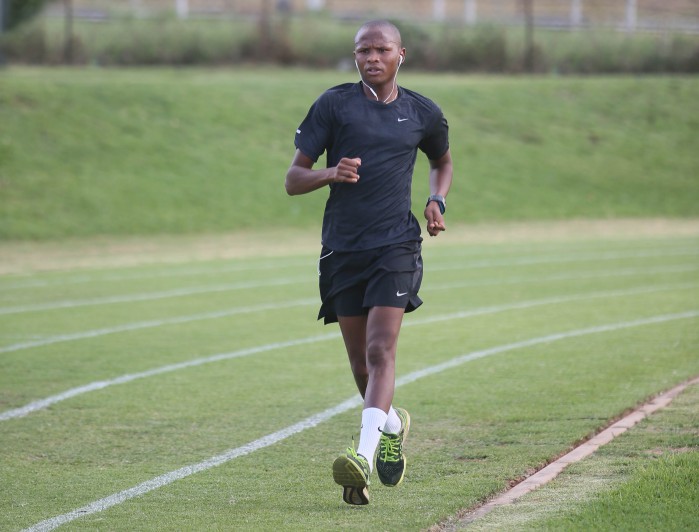 Breaking South African race walking records will be the last thing on Lebogang Shange’s mind next year. The goal he will be striving for will be much more difficult and also much more important.

He will be preparing himself to get a top-three finish in the 20km race walk at the Olympic Games in Rio.

To prove how serious he is about this, he has stuck a big note on the ceiling of his bedroom. It is the last thing he sees before he turns off the light at night and it reminds him why he has to push his body to the limit day after day and why he needs to make certain sacrifices.

Shange was the most prolific record breaker this season. He did so on no less than five occasions but now he cannot help wondering whether it was worth the effort.

“People read about my record-breaking exploits and see me talk about it on television and they presume that I must be raking in ‘big’ money. The honest truth is I did not get one cent for any of the records I have broken. I actually received very little recognition for my efforts from any of the decision makers in South African sports. All I received was one congratulatory letter from a personal assistant working at Athletics South Africa (ASA) and that was it.

“That is why I am planning to change my whole strategy next year. I am going to be more selective when and where I will race. I am not getting any younger and therefore it is important that I start to make a living as a race walker.”


Shange is planning to do things different next year. His coach, Chris Britz, wants him to drastically change his racing strategy.


“Chris wants me to start racing from the front, rather than chasing down the leaders over the last kilometres. I guess adapting to a new racing strategy will take some time. One of the things I love about race walking is the chase over the last kilometres. While I am racing I get involved to such an extent that I totally forget about the kilometres. All that matters is catching up and passing the athletes in front of me. But I am up to the new challenge. Chris reckons it will take about three races for me to get used to racing from the front.


“Although my focus will not be on breaking any records, my aim will still be to consistently walk times of between 1:18:00 and 1:22:00. If I manage to do that, I ought to be able to get a top-five or better finish in Rio. The racing at the Olympic Games is usually a tactical battle.”


Shange is full of praise for the role Monja Human, a sports psychologist at the HPC, plays in his success as a race walker.


“I must admit that I, especially coming from a township, was sceptical at first about going to see a psychologist. I thought it was only crazy people who did so, but she totally changed my perception about psychology. Monja helped me believe in my abilities as a race walker and to be fearless when I race.


“More importantly, she taught me how to stay focused and calm when I race and not to get intimidated by the athletes against whom I am racing. She keeps emphasizing that it is important that I stick to my race plan.”


Shange will fly out to Canberra in the first week of January to attend a race walking camp organized by his role model, the Olympian medallist Jarred Tallent.


He is planning to stay on for a few weeks after the camp to do some more training and he also plans to compete in one race in Australia.