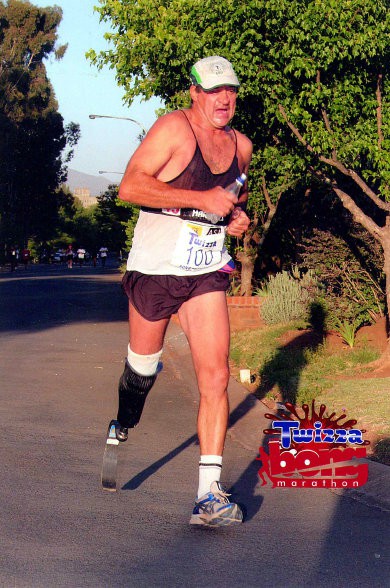 After years of running with a prosthetic blade, inspirational Eastern Cape ultra-marathoner Japie Greyvenstein is now struggling to complete races, and is looking for help to get a new running leg. – BY SEAN FALCONER

Life changed forever when Japie was just 21 and working on the railways in Queenstown. He was on night shift when he slipped and fell under a moving train, resulting in two amputation procedures on his right leg to just below the knee, and he also needed an iron pin with four screws in the left ankle. Having been a runner before the accident, it took Japie nearly 20 years to try running again, but it all started 13 years ago when he visited his sister in Plettenberg Bay and saw people running on the beach, so he decided to try running again.

“I started with fairly long runs on the beach sand, with my walking leg and in my Hi-Tec boots, and when I got back to Queenstown, I started running 12km morning and evening on the tar. A local runner then suggested I run the Bongola Half Marathon, and soon 21km was just not enough – I was not really tired by the end – so I tried a marathon, and I have done about 110 now.”

Geared Up
Japie originally ran on his walking leg, then received a sponsored running blade eight years ago, courtesy of the Sports Trust, and went on to run the Old Mutual Two Oceans Ultra six times, finishing it officially twice, and he attempted the Comrades three times as well, making it as far as 71km one year. However, in recent years he has picked up problems with his legs. “I now I have to stop six or seven times in longer runs to massage my leg, because it goes lame. My stump has changed over the years and the blade’s socket had become a bit too long, so I ran lopsided and started picking up problems in my left knee, until I finally had the socket shortened, but the sleeve still hurts my stump and I now have to bandage it and change the sleeve several times during a long run.”

Now 53, Japie survives on a small disability pension from the railways and supplements that by doing painting and maintenance work around Queenstown. He is also caring for his sickly 77-year-old mother, and says life is just getting more costly. The railways pay for a new walking leg every five years, but he is unable to afford a new running leg, and while friends like Peet van der Walt and Janneke Du Preez have tried to help him find a sponsor for a new leg, they have not had much luck yet.

“I really love running, I’m pretty much addicted, and I still manage 10km in the morning and evening, with a 35km long run on weekends, but I have to stop all the time because of the leg. It is frustrating that I can’t finish longer races now, not because I am not fit enough or too tired, but because my leg is so sore. I want to try Comrades again in 2016, and I want to inspire people and show them that having a disability should not restrict you from doing what you love – but then I need a new running leg.”

If anybody is able to help Japie obtain a new running leg, or a multipurpose socket for both walking and running, they can contact Peet van der Walt on 079 231 1907.