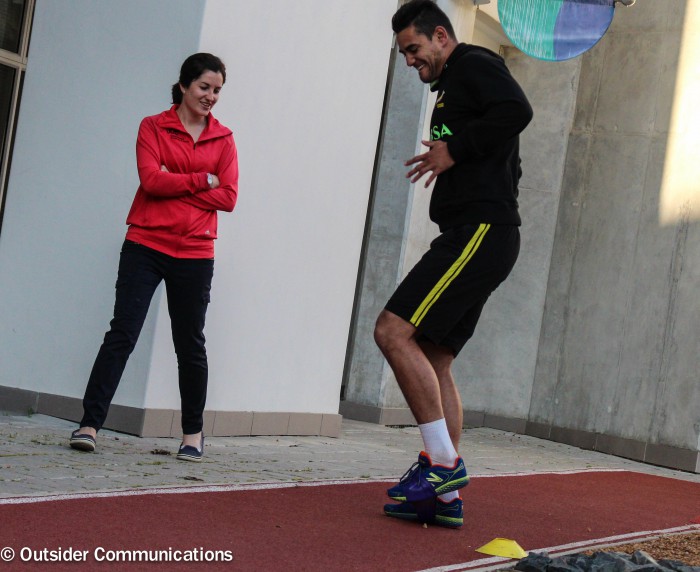 For some people, running on a treadmill might be boring and the idea of running straight lines isn’t too exciting, either, but after months out of action following an operation, Blitzbok Sevens Star Chris Dry says any form of running is exciting! – BY EUNICE VISAGIE

Springbok Sevens Rugby player Chris Dry will never take the ability to run for granted again – even on a treadmill, or just in straight lines. That’s because he wasn’t able to run at all for a few months following a hip operation in late May 2015, to fix a long-term niggle, at the end of the World Sevens Series, which was followed by 20 weeks of rehabilitation that initially included no running whatsoever. Having made his return to playing action in October, the 27-year-old veteran of more than 40 Sevens tournaments looks back on his time out of action and says, “Any form of running is exciting if you haven’t been able to run for months on end!”

“At first I mostly did strength training, mainly off-the-feet work, and then I started with slow walking and cycling. And then it was time for the Alter-G anti-gravity treadmill. Running finally started with straight line running on the track at the Stellenbosch Academy of Sport. Some side movement running on the field followed that, and then it really got exciting when I was allowed to do some running integrated with stepping!”

Next Chris had to get back on the field and train with the team. “It was a slow process, and I could not do all the session immediately. The last step was getting fully involved with all the session and being able to take contact.” Chris then made his comeback at the end of October when the Sevens team played in Singapore, and he says, “It was great to be back, and Nadia Clenzos from the Stellenbosch Academy of Sport’s performance unit deserves a lot of credit for my smooth comeback.”

Moving Up
Chris began to stand out in rugby at Grey College in Bloemfontein, making it into the Free State Under-18 team for the Craven Week, then going on to play Under-19 and under-21 for the province. The flanker made his first class debut in 2009 in the Currie Cup, but in 2010 he changed direction by joining the South African Sevens set-up, making his debut at the 2010 Adelaide Sevens and quickly establishing himself as a regular in the team. At the time of writing in mid-November, he had played in 44 tournaments for his country, including being part of the gold medal-winning team at the 2014 Commonwealth Games in Glasgow, Scotland. This past season the SA team not only finished second in the 2015 World Sevens Series, but also qualified for the Olympic Games in Rio next August.

The upcoming season is going to be huge for the Blitzboks. The World Sevens Series is 10 tournaments and the season ends with the Sevens debut at the Olympic Games. It will be the first time ever Sevens will be part of the Olympics. (Rugby was part of the Games for the last time in 1924, when America won the gold medal.) “The Olympics is the ultimate goal of the season, but we will focus on each tournament as they come,” says Chris. “We are a proud squad and we will always be going to tournaments and take the field with the eye on achieving the goals we set as a squad.”

Chris admits that now that he is fully back to playing fitness, the only running he will be doing is on the field. “I did a lot of cross-country running when I was younger, but now I really need to take care of my joints, because my body already gets lots of punishment. There was a time when I did some running during the December holidays, but now I like to add something to the running…like playing Sevens!”