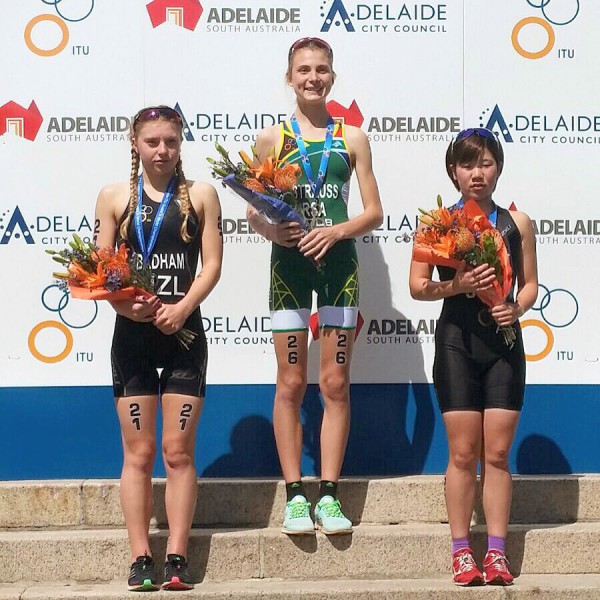 Having won the ITU Duathlon World Champs Junior Women’s title in Australia in October, Gizelde Strauss appears to have a bright future ahead of her in multisport. – BY SEAN FALCONER

The lead pack of four girls competing in the ITU World Du Champs in Adelaide stuck together for the 5km first run leg, and then through the 20km bike leg, but after just 100 metres of the final 2.5km run leg, SA’s Gizelde Strauss put the hammer down and pulled away from her competition, quickly opening a 20-second lead and holding it all the way to the finish to claim her first World Title. Not bad for a 16-year-old competing in the 16-19 junior age category against older girls.

Gizelde says she went into the race with a clear gameplan. “I was stressing a bit when they called us to line up, but soon as the gun went off I forgot about everything and did my race as I was supposed to. The plan was to stay with the pack at first, because I run well, so I can break away early, but my cycle is not as strong, so it doesn’t help to go too early. Therefore, I stayed with the pack on the first run and the bike leg, then broke away on the second run. Winning the title for SA felt really great, like all my hard work paid off, and I would definitely like to stand on the podium to hear our National Anthem played again!”

Starting Young
Gizelde was born in the Free State, has grown up in Limpopo Province, and currently attends the HPC High School in Pretoria, where she is coached by former Olympic and Commonwealth triathlete Katie Roberts. Her older brother Yanich is also a talented multisporter, and Gizelde says she got into sport thanks to him. “When I was five, my brother did running and swimming, so I also started, just having fun. I got SA colours for the first time in Grade 0, in biathle, and also did cross-country and biathlon, and I started with duathlon and triathlon when I was 12.

This year has been particularly successful for the youngster, as she won the SA titles in her age category in both duathlon and triathlon, then won the African Champs title in Duathlon in Egypt before claiming the World Champs title in Australia. “I was also selected for the World Champs in triathlon, but Kate and I decided my swimming is not good enough yet, and it would not make sense to spend all that money to go there and then not even finish due to possibly being lapped and eliminated, so I will work on that in the coming year and hopefully get to both World Champs next year.”

Unsurprisingly, Gizelde also dreams of turning pro after school and one day competing at the Olympics, but she also wants to study sports nutrition and go into that after her competitive days are done. Either way, the future looks bright for this young World Champ.