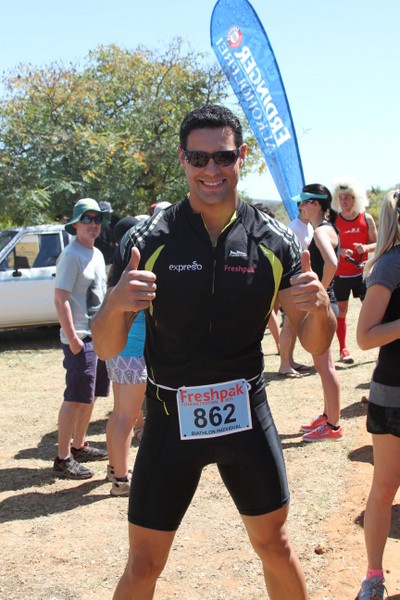 There were two very familiar faces in the biathlon/duathlon event of the Freshpak Fitness Festival in Clanwilliam in October, as Expresso TV breakfast show hosts Ewan Strydom and Leigh-Anne Williams found some time in their crazily busy schedules for a bit of running and biking. – BY SEAN FALCONER

Things didn’t quite go to plan for well known TV celeb Leigh-Anne at the Freshpak Fitness Festival. While co-presenter and close friend Ewan had done many road runs before, as well as doing the biathlon race at the festival the year before, it was her first ever competitive race, having only walked a few 5km fun runs before, and she was feeling a bit nervous. “The training I had done was mostly in the gym, due to my hectic schedule, and I don’t think anything can really prepare you for running on the road, or for the heat,” says Leigh-Anne. “I thought I would do a lot better, but I’ll be honest, I was gassed in the first couple of minutes of running!”

“When I got to the cycling section, I thought I was going to be equally bad, but I actually made up a lot of time. However, I was supposed to be done after the bike leg and just jog around the corner from transition to the finish line… but when I asked the officials which way to go, they told me to continue straight, because they thought I was doing the duathlon. So they made me run the entire course again! But I’m happy I did it, and it has spurred me on to improve for the next one. I can’t deal with the fact that I struggled so much with the run!”

Ewan jumps in here: “I’m proud of Leigh-Anne, especially since she did an extra unplanned run and still looked so fresh when she came in. In fact, I’m proud of her just for rocking up for the race, because it can be daunting for somebody who’s never done something like that before. Being my second time at the Freshpak Fitness Festival, I think I was mentally better prepared, especially after the heat of last year, but I had done less training due to just coming off a boxing event training programme, and then work took over, plus I picked up a bad chest infection just before the race, so I was really surprised to finish fourth. Next year I’m going to go out for a place on the podium!”

Hectic Schedules
Fitting in training is a major challenge for these two celeb athletes. They are up at 3am on weekdays to drive to work and prepare for the daily television show, and that is then followed by other TV, radio and film work, voice-overs, presenting, emceeing and modelling, and they often only get home again around 8pm. And yet both still find time to train and work on their fitness.

“If something is important to you, you will find time to fit it into your life, especially things that make you feel good,” says Leigh-Anne. “Yes, we are required to look good and feel good, because we’re selling a feel-good show, and when people watch us it has to translate on screen, but training is also important to me because I like the way I feel when I’m healthy and fit. It’s about finding a gap in the day, and often I have to sneakily fit it in by creating a ‘meeting’ here and there, but if that doesn’t happen, I train after the radio show, from 7pm till 9pm. I find a way.”

Ewan immediately nods in agreement, saying, “Just like I need to fit in eating and sleeping, so training is part of my day, and if I can’t fit it in, I will make a plan, because it’s part of my lifestyle. It doesn’t matter where I am working or travelling, I will always pack my training goodies. If I can I train six days a week, and if I know in advance that I am going to be very busy for a few days, I try to put in the extra work before or afterwards, to make sure I don’t lose momentum. Sometimes that does bite into my already limited family time with my wife and two young kids, but I try to make it up on the weekends. And then some people tell me they don’t have time to train… You can do it if you put your mind to it.”

Star Qualities
Leigh-Anne comes from a radio background, having worked at Good Hope FM since 2006, and for the past four years she has also been on Expresso. Earlier this year she was one of the 10 celebrity contestants on the reality competition series Strictly Come Dancing, and she says that really raised her public profile. “At Expresso I was actually lucky to fly under the radar – people would recognise me, but would it would always be ‘There goes Expresso,’ I didn’t have a name – but then I did Strictly Come Dancing, and after that things were insane. Expresso has also grown so much this year, and I think people now think of us as part of their family.”

Ewan grew up in Gauteng and was a swimmer and sprinter at school, then relocated to Cape Town in 2001 for modelling work, where he took up road running to keep fit and explore the city. His appearance on the front cover of Men’s Health magazine in 2008 and participation in that year’s Men’s Health Look competition launched his TV career. He’s also a qualified personal fitness trainer who has made it his mission to motivate and inspire people to change their lifestyles and become healthier and fitter, and that’s why he and Leigh-Anne are working on their own sideline project to produce an online health and fitness programme.

“This is something that we’ve been wanting to do for a while, we just needed to find a gap,” says Ewan. “There’s so much information out there, but it can be overwhelming, so I think it is important for people to hear it from somebody like Leigh-Anne or myself, using our personal experiences to help them. People want to look good and feel good, especially looking at us and knowing our hectic lifestyles, and yet we still manage to lead healthy lives and look good. We live in a very fast-paced life, so naturally people are always looking for a quick-fix, but when it comes to achieving your goals, it’s not easy, you need to work for it – and that’s also why Leigh-Anne’s story is so important to our message.”

In October last year Leigh-Anne decided to get into shape ahead of going on the road for three months for the Presenter Search show, so she signed up with a personal trainer and lost 11 kilograms in five months. “It was the hardest thing I have ever done, but there was such a massive response from women across the country who said please can I help them do the same,” says Leigh-Anne. “Before embarking on this journey I think I was always hiding, not being true to myself and not living to my full capacity, and once the weight was gone I found who I really was. With it came confidence, and the courage to do things I had never done before, like Strictly Come Dancing, and the biathlon. I would never have done either of those before in a million years! That’s the gift that we want to give people with the new show.”