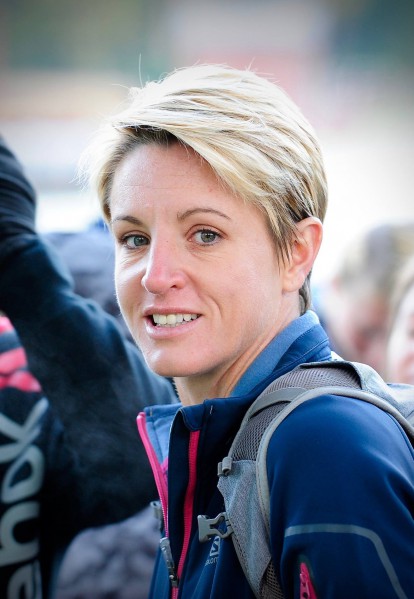 She has excelled in road running, cross-country, trail running and now obstacle course racing (OCR), including representing South Africa at the 2015 OCR World Champs in the USA, and still Trish Bahlmann says she is driven to achieve more. – BY SEAN FALCONER

Earlier this year, Trish Bahlmann was standing at Durban’s King Shaka Airport with boyfriend Claude Eksteen, about to board a Thursday flight to Cape Town for the three-day Pronutro AfricanX Trailrun, when her phone rang and she heard that her running partner for the event had just been involved in an accident and could no longer run. “My bags were already on the plane when I got the news, so I had to have them removed, but then Claude said I should change my ticket to Saturday morning and join him for the trip to the Impi in Gauteng, and I won it.”

The rest, as they say, is history. Trish focused on OCR for the rest of the year, going on to win the Cape Town Impi as well as taking line honours in one of the Jeep Warrior series races, and she came frustratingly close to adding several more Warrior titles. “The transition from trail running to OCR has taken me a while. You need more upper body and grip strength, so that you can hang on to ropes and rings with your full body mass. As runners we don’t really use our arms or hands, so it was a huge adaptation.”

“I’ve run ultras on the road and trails, but never been in such a mind-game as in OCR. In running you can still walk to the line if you blow, but if your arms blow, there is no way you can get over a tough obstacle. Where I often come short at Warrior races is the last big obstacle. Thanks to my running strength I am usually well in the lead, but then I sometimes get stuck and the other girls pass me. OCR can be one of the most frustrating things in the world, but mind you, I’ve only been in the game about 10 months, and I’m getting better all the time.”

World Champs
In spite of a few frustrating losses, Trish did enough to secure a spot on the Jeep-sponsored SA team selected for the OCR World Champs in Oregonia, Ohio on 17-18 October. “It was a huge honour to be selected to represent SA for the first time, and it was also my first time travelling overseas. I’m not a great flyer, though, so that was my first obstacle to get over. Next time somebody must just knock me out when we have to fly! But what an experience to compete against people who make OCR a profession, and the level of racing was unbelievable. At Impi and Warrior we normally do 15 to 18km with about 30 obstacles, but the World Champs course was 17km with 53 obstacles! Granted, the obstacles were generally easier than what we have back home, but the running was proper trail, either steep up or steep down – the only flat section was the finish line!”

The SA team also had to contend with freezing cold, rainy conditions, what Trish describes as “the worst conditions I’ve ever had to compete in, despite growing up in the Free State where it can get bitterly cold. It was zero degrees on the Saturday morning of the individual races, and we went straight into the water near the start, so we couldn’t even warm up. You know something is happening if you get handed a space blanket halfway through an event! It’s amazing what the cold can do to you – you think you’re strong and fit, but it’s horrible when your body is shutting down. It became a survival race for all of us, and took us hours after the race to stop shivering.”

In spite of the cold, Trish and Hanneke Dannhauser still did well in the open elite category race, which started first up at 8am, with Hanneke finishing sixth and Trish coming home 10th. Most of the other South Africans elected to run in specific age categories, which started an hour or two later in the day, when it was slightly warmer. “That made things a bit easier for them, in my opinion, because the ice was pretty much scraped off the obstacles by then. I went there thinking I can probably win my age category, but I wanted to compete against the best in the world, and I am really chuffed with 10th place, as I only started OCR this year.”

The second day of the Champs saw the team races take place, with Trish and Hanneke teaming up with Dominique De Oliveira for SA team 1. “I was the designated runner, so I went off first, with a few obstacles, then Hanneke did a strength section, and then it was back to me for another run section, followed by Dom doing a technical section. Hanneke then did another strength section, and then all three of us had to join up for the last section. It was hard because we got cold in between our sections, and Hanneke lost a few positions in the first strength section because of an issue with her ankle, but I pulled us back from eighth to fourth in my second run, and then we took third from the other SA women’s team on the last obstacle.”

Running Background
Trish is a divorcee with two young sons, Keegan (7) and Daniel (4-going-on-13), both of whom are showing a talent for running. She also excelled at track and field and cross country while growing up in the Free State, and says, “My love of running started when a friend asked me to come run with her because there were so few runners taking part in cross country, but I beat them all, so that friendship didn’t last…” Trish would go on to medal at the SA Cross Country Champs in 2012 and 2013, winning silver in the 30-34 age category and then silver for 35-39s, plus a team gold.

Her love of running also prompted her move into road running after school, and this eventually saw her to take on the Comrades Marathon for the first time in 2004 and 2005, both of which she says she just ran to finish in nine to 10 hours, but she returned in 2012 to post an awesome 7:31, narrowly missing out on a silver medal. She then ran 8:18 in the heat of 2013, followed by 7:40 in 2014. “I still have unfinished business with the Comrades, because I missed silver by less than two minutes, and that leaves a bad taste in my mouth,” she says determinedly.

However, she adds that road running had started getting a bit boring, hence she went over to trail running in 2014, and instantly fell in love with it as she won the Lesotho Ultra Skyrun 50km, Golden Gate 3-day stage race, Mont-Aux Sources 50km and 1000 Hills Crazy Stores 35km, along with other podium finishes, but it also left her feeling tired by the end of the year. “I knew I needed a break, so I asked Claude how to take time off my legs but still benefit my running, and he suggested strength work and obstacle racing. That saw us launch our business in March this year, Adventure Obstacles Training, which focuses on strength training and coaching, and we have a lot of runners in our regular training groups. We also do a lot of corporate functions, team-building exercises and kids’ parties, so there is plenty going on.”

Looking Ahead
In terms of 2016, Trish says her focus will be a combination of OCR and trail running, and she is hoping to once again get to the OCR World Champs while also doing some of the big trail races, including the Otter as well as teaming up with Claude for the AfricanX and Southern Cross stage races. “I’m hoping that 2016 will be even more successful, and I’m now on a level where I can continue training for OCR, but still go do some awesome trail running. But next year the OCR World Champs are in Canada, which will probably be even colder, so we’ll have to train in freezers!”