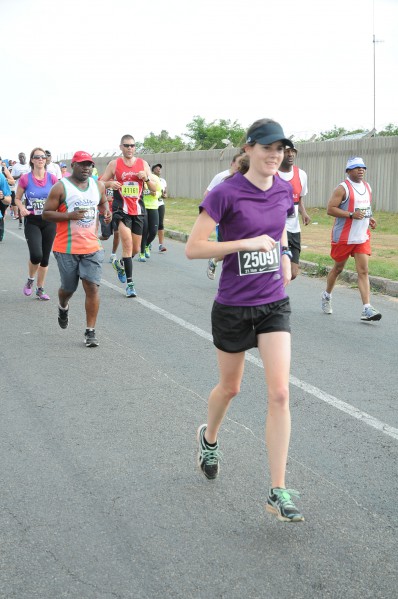 If you had told me two years ago that I would one day run a half marathon, I would have laughed in your face, but once in a while you need to blow your own damn mind. – BY DIANE SHEARER

I was never much of a runner until I started going to parkrun on Saturday mornings. That’s when I realised 5km is much further than you think. At first I absolutely hated parkrun… It was self-willing torture, where I would wake up at a ridiculous hour on a Saturday morning to run for what felt like the longest half hour of my life, but I think my endorphins overruled the feeling of torture, because I just carried on going back. I have now run over 50 parkruns, and I went from 5km to doing a 10km and then to entering a half a marathon in just a few months.

Now I don’t half-ass things: I either give it my all or I just give up, and so, when my boyfriend Jason wanted to do a 10km training run the week before the race, which would be my first 21km and his first marathon, I think I had a moment of optimism… I was meeting family at Gilroys Brewery for lunch and couldn’t do both, unless I ran there, but it is 21km from my house to Gilroys. I was waiting for a “Just kidding,” but those words just didn’t come.

Full Dress Rehearsal
We duly headed off, telling my parents to keep an eye out for us in case we needed a lift, and at first I thought this isn’t so bad, but that was quickly replaced by, “Woah, you’ve clearly forgotten that you’ve never run more than 10km in your life!” However, quitting was not an option and I forced my legs to push harder. Once I start something, I will always finish it, no matter how hard I have to push myself.

We got to a seriously long hill and I was really wondering what I had gotten myself into as I felt my throat close up in panic. However, I felt a surge of adrenaline and eventually got into the rhythm, and I could feel my heart beating in my feet as they hit the ground. We ran 15km in one hour 40 minutes and that was when we saw my parents anxiously waiting for us, but we stupidly decided not to take their offer to drive us the rest of the way, as we only had 6km left. That’s like a Parkrun, it would be easy…

We stopped at a garage for a quick Coke and carried on running. Big mistake, because it’s hard to get those legs moving again. The last 4km, with about 3km uphill, was probably the hardest thing I have ever done – everything in my body just said “No!” My muscles were sore as I stomped one foot in front of the other, but I tackled that long hill and continued running, probably because I was so desperate to finish. We took 45 minutes to run the last 6km, but we were done, and there was a light at the end of the tunnel: A beer never tasted so good! I was so tired I couldn’t even lift my beer mug, which is strange, because I didn’t run on my arms… although at some point I’m pretty sure I was crawling.

The Real Thing
Official race day came, and I couldn’t believe I woke up at a ridiculous hour to stand in the freezing cold to put myself through that torture again. The timer started, the crowd of runners started moving, and I quickly felt the warmth seep into my muscles and my breathing matched the beat of my feet hitting the round. It suddenly felt so easy, as though I was flying on autopilot. All I can say about that race is that I just ran and ran and ran, and it felt so good. (Oh, and it’s harder than you think trying to drink out of a cup while running, but it just felt so unnatural to walk!)

I finished my first official half marathon in two hours and eight minutes, and still felt strong as I moved my legs as fast as I could towards the finish line. I did not expect it to go that well, my mind was blown, and that prompted me to do an illustration about my experience. I still have no idea why I run. I just can’t stop. Maybe it’s the feeling of accomplishing something I never imagined doing.