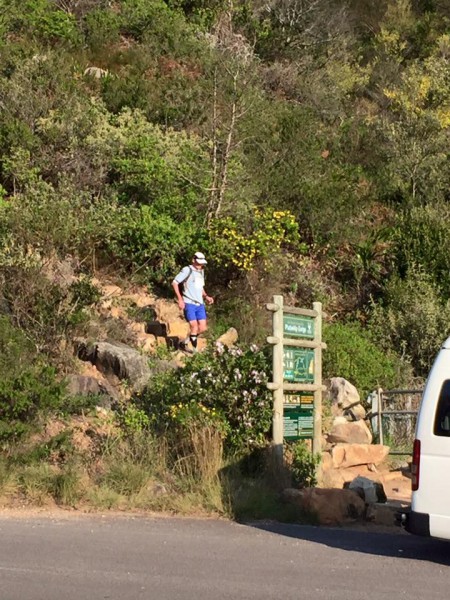 In light of the fact that I ran my 11th PUFfeR (Peninsula Ultra Fun Run 80km) from Cape Point to the Waterfront in August, finishing in 12:26:35, I thought I’d share my story about the horrific accident I had on the day of the race eight years ago in 2007, when I tried to take a short-cut down the mountain. – BY STUART PURCELL

It was a beautiful day – late winter in Cape Town with not a cloud in sight, the sun streaming down warmly, and a stunning view from Table Mountain of the city bowl and harbour at my feet. Life couldn’t get better. I was lying in fourth position in my favourite trail race, and I could just cruise in to the finish in Cape Town’s famous Waterfront in my own time. But then things went horribly wrong…

BITTEN BY THE BUG
I’d first been coerced into running by Jon Cane, a natural runner who never struggled to run up even the toughest hills. As a result of his persistent nagging, I ended up doing a few Peninsula Marathons and Two Oceans Marathons, and then one day in 1996, a mad trail runner by the name of Phil Struckman ‘gave’ me an entry to that year’s PUFfeR. He explained that he had participated in the inaugural running of the 80km challenge the previous year, along with 18 other nutters, that it had been postponed by a week because there was too much snow on Table Mountain and the weather conditions were too severe, that a few of them had gone up anyway to check it out, and that the race had taken place the following week. He’d loved it, and his enthusiasm (coupled with a delectable red) prompted my acceptance of his invitation.

I took part, in various stages of fitness, for the following three years, taking enormous strain with the distance, but the awesome terrain blew me away and I was addicted, convincing a few other people to take part. I took a few years’ break from running for various personal reasons, including some niggling injuries, but when I eventually got back into the running groove, my times over the longer distance seemed to have improved with age. Experience counts, obviously, and I was enjoying the running more, as my PUFfer position and time improved with each run. I finished in seventh position on two occasions, with my best result being sixth in 2006, and from taking over 12 hours to complete the race in 1996 to 1998, I was now able to finish in less than nine hours.

IN TOP RACING SHAPE
So along came my eighth PUFfeR in 2007, with some solid off-road training under the belt. I loved the Fisherman’s Trail Challenge and nearly died on the Hout Bay Trail Challenge, but was feeling really great about my progress and fitness. The Saturday morning of the race dawned cool but not freezing, breezy but not windy, and very dark. But it was a stunning day and all went as planned. The toughest part for me is always the trek up from Constantia Neck to Maclear’s Beacon, after 56 tough kilometres – by then it is hot, and the legs and mind are not working.

From Maclear’s to the top of Platteklip Gorge is two straight running kilometres, with the drop down to the path having a fearsome reputation, but it had never bothered me in the past. I was more worried about my fourth position, but knew that very few people could make up any ground against me going down Platteklip. On the path towards the Lower Cable Station, I felt strong enough to keep running, even though I knew that my position was now safe, and I knew the rest of the route like the back of my hand.

That being a very wet year, and the day being particularly warm, I decided when I came to a rocky overhang to reach out and grab some falling water in my cap to splash over my head. As I did so, I slipped and fell down the gorge, a distance of about 20 metres. I bounced once or twice, but it was essentially a sheer drop, and I was badly injured, unconscious and lying in a stream. I had a completely shattered right elbow, and my head had taken a few big knocks to the extent that my scalp split open like a melon. Not a pretty sight!

GUARDIAN ANGEL
However, luck was with me: A tourist spotted my antics and informed the next runner, Hayden Hobbs, of my predicament. Hayden, coincidentally, is a doctor, and he happened to have his cell phone on him. He abandoned his race to come to my aid, clambering down to my position, contacting the emergency medical personnel and stabilising me. From there, things were a bit of a blur for me – they usually are, according to my wife – and all I remember is being freezing cold, joking with Hayden, refusing to give him my wife’s phone number (because I didn’t want her to worry), dangling below the helicopter all the way to Groote Schuur Hospital, the discomfort of the neck brace, some indelicate interns pulling dozens of stitches through my scalp, and eventually the presence of my wife. Funny, there was no pain at all (except for the stitches). Morphine works!

My elbow was operated on the next day in Vincent Palotti Hospital, where the completely snapped bone was reattached using two pins. I was a bit of a mess, but luckier than the American tourist who had fallen from the same place, just two hours before me. She’d broken her back. I was home after three days, and only off work for a total of three weeks, but it wasn’t all plain sailing: My arm was basically useless, so my wife had to help me with nearly everything I did. Try shaving with your left hand if you are right handed! I went through weeks of physiotherapy, suffered from flashbacks, could only sleep with the help of sleeping tablets, anaemia kept me sluggish and tired, and my back and arm were constantly painful. But if you survive a six storey fall, who cares? I was lucky.

Today there are still some long-term effects. My arm will never be fully functional, but some would argue that with my scrawny biceps, it never was anyway. Meanwhile, my head is a funny shape – a great improvement, I have heard – and my back likes to remind me that it also took a bit of a hit, but aside from that, I am still running the PUFfeR. So my message to other runners is to get fit and get out on the trails, but try to avoid taking any vertical short-cuts!