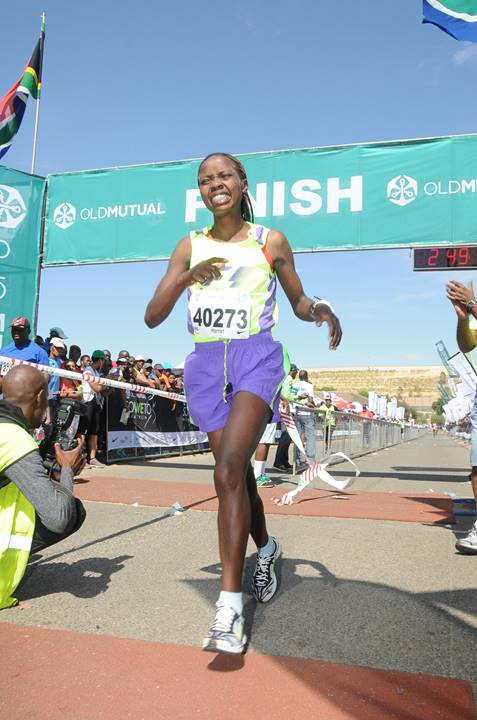 Over 19 000 runners took to the streets of Soweto in the Old Mutual Soweto Marathon on Sunday morning, 1 November. The race started and finished at the Expo Centre in Johannesburg (NASREC), connecting runners from all over the world to six significant heritage sites dotted along the 42.2km marathon route, including Chris Hani Baragwanath Hospital, Walter Sisulu Square, Regina Mundi Catholic Church, Morris Isaacson High School, Vilakazi Street and Hector Pieterson Memorial.

The marathon men’s race was won by defending champion, Sintayehu Legese Yinesu from Ethiopia, who crossed the finish line in a time of 2:23:20. Zimbabwean Mike Fokoroni took second place in 2:24:12, followed by John Kirui from Kenya (2:24:42). “I feel so blessed to have been given the opportunity by Old Mutual, Soweto Marathon and the support from Nedbank Sport Athlete Development Initiative through their development of Ethiopian as well as South African runners,” said Yinesu. “Without their support it would not have been possible for me to defend my title.”

In the women’s race, Kenyan Harriet Jepchumba Chebore led the marathon field home in a time of 2:50:15. Second place went to Amelework Fikadu Bosho in 2:50:15 and in third place, Selam Abere Alebachew ofthiopia completed the marathon in 2:52:03. The two marathon winners each take home R200,000 in prize money.

In the half marathon, Akopo Africa showed fine form to win the women’s title in 1:19:34, while Elroy Gelant took line honours in the men’s race in 1:06:33. Meanwhile, the 10km men’s title went to Namakoe Lucky Nkasi, and Rutendo Nyahora took the women’s title.

For the first time all three routes took runners through the heart of Soweto, allowing all participants to revel in the township’s rich history. “True to tradition, The People’s Race attracted widespread support, with Soweto residents lining the streets, which added a unique spirit and atmosphere to this occasion,” said Mokaedi Dilotsotlhe, Chief Marketing Officer of Old Mutual Emerging Markets. “With Soweto’s rich history and diverse culture as backdrop to the race, we believe that it’s a race every South African should do at least once in their life, and we’re looking forward to returning next year for the 2016 Old Mutual Soweto Marathon, to give the rest of South Africa the opportunity to experience it for themselves.”