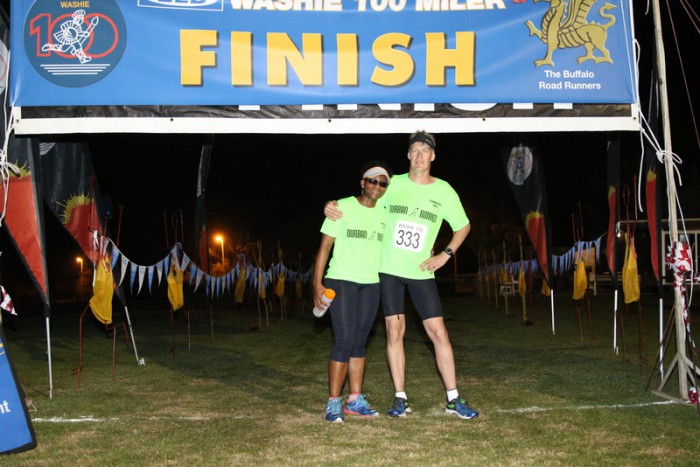 We often hear runners’ stories of ultra-distance races, but we seldom hear about these runs from the perspective of an athlete’s support crew, or seconds, and the critical role they play in supporting the runners. I hope that writing about my experience as a second in the recent Washie 100 Miler not only gives the event the attention it deserves, but also gives runners useful insight into the support they will need out on the road, and how they should assemble their support team. – BY THOLAKELE CHARMAIN SHANDU

Far less people have heard of the Washie100 Miler in South Africa than the Comrades Marathon, so for those who don’t know it, the Washie is a 160km road race from Port Edward to East London, with a 26-hour cut-off. The race starts at 5pm on a Friday and is run as close to the full moon as possible, but runners must still get through a long night of running, much of it along an undulating, busy highway.

It is a very long, gruelling run, and one of the requirements of the race is that runners must have a support team of seconds to look after them, in a car in good running condition and with enough petrol to drive up and down the route. And so this July, I and two running mates were invited to be seconds when our friend Gerald Pavel signed up to run the Washie for the first time, and that 160km trek was the longest thing any of us have ever been exposed to.

Esteemed Company
Gerald has four Comrades bronze medals, and his team of seconds included a Comrades gold medallist in Prodigal Kumalo, who has also won several races on the track and in cross-country, on the trails and over the marathon distance. Then there was Zisandele Mkhize, a Comrades Bill Rowan medallist who also boasts podium finishes in various trail races. And then there was me… I am merely a Comrades finisher. Against these talented Comrades runners, I couldn’t help but feel that I was second-best with my three Comrades Vic Clapham medals, which were all achieved in the last 30 minutes before the 12-hour cut-off. Also, the fact that my Comrades record includes two DNF’s did not help my confidence levels. Nevertheless, there I was.

Now let’s come back to the role of a second: You are supposed to supply the runner with food and ensure that they are adequately hydrated, and ensure that the sustenance is provided at the right intervals. The second is also a cheerleader, storyteller, jokes master, singer, poet, and reader and confirmer of the very big glow-in-the dark kilometre markers to the incredulous runner. The second must also have thick skin and be able to withstand verbal and emotional abuse from the runner, who may think the sun revolves around them…

Seconds also need to be able and willing to run, as one of their jobs is to keep the runner company by running at certain intervals alongside their runner, so they must be fit and have a fairly good understanding of what running entails. Our plan was that I would do most of the driving and just do a little running with Gerald, to relieve the other two main seconds.

Friend in Need
The race started and Prodigal and Zisandele ran a couple of 10km stretches here and there with Gerald, while I did just one 10km set and then stuck to driving. However, their 30km limit each was eventually reached, as they had to preserve their elite athlete bodies and protect themselves against overuse injuries, having just come back from Comrades barely a month before. And so, with 50km to go, when Gerald wasn’t looking too good, instead of just doing a few kilometres at a time, I ended up running and walking alongside him the rest of the way to the finish. He wasn’t taking kindly to stories, joke-telling or pep talks anymore, so I ran quietly beside him, just being there while also supplying him with food and drinks.

At about 22 kays to go, he wanted to “lie down for ten minutes.” I knew that if he did that, he might not be able to get up again and continue, so I talked him into continuing. Then just 4km from the finish, he started shivering from the cold, so I took off my very thin T-shirt – the only covering I had against the cold – and put it on him, covering his arms, straight-jacket style. I was left wearing only my sports bra. We must have made a very weird pair: A shuffling and shivering white man with too much clothing on, literally being pushed by a black woman with barely any clothes on!

Finally we had 2km to go with 24 minutes left on the clock until the final cut-off, but by then we were doing an average of 15 minutes a kilometre, and I realised that Gerald needed to run the last stretch if he was to finish. I firmly told him that he needed to run now, but he told me he couldn’t. I told him he can, and he will, and I started to push him in the back to make him go faster. He responded by taking off my T-shirt straight-jacket and not only did he start running, but Gerald ran harder in that last kilometre than he had in the previous 60 kilometres. We crossed the finish line with just under 10 minutes to spare.

Slow and Steady Wins
The short lesson from this long story is that the running experience of all his seconds helped Gerald with his Washie 100 Miler experience, but I believe that having a ‘finisher’ in his team got him over the finish line. As a finisher, I know that when the clock and the odds are against you, and when the thoughts hit home of all the hard work and the sacrifices you and your loved ones have made to get you to the point when you are race ready, when the faces of strangers swim before your eyes and they shout that you can make it, that you must just keep going. You need to dig deep and find that extra mental reserve that will get you to the finish line when your body can’t do it alone.

Gerald had never been under that pressure before in his four bronze medal Comrades runs, and neither had Prodigal or Zisandele with their stellar performances. I may not have been the fastest runner in the team, but my Comrades Vic Clapham medallist experience is what saw Gerald crossing that finish line. And as I sat down after eight solid hours on the road, I smiled with my newfound knowledge that sometimes second-best is actually best.