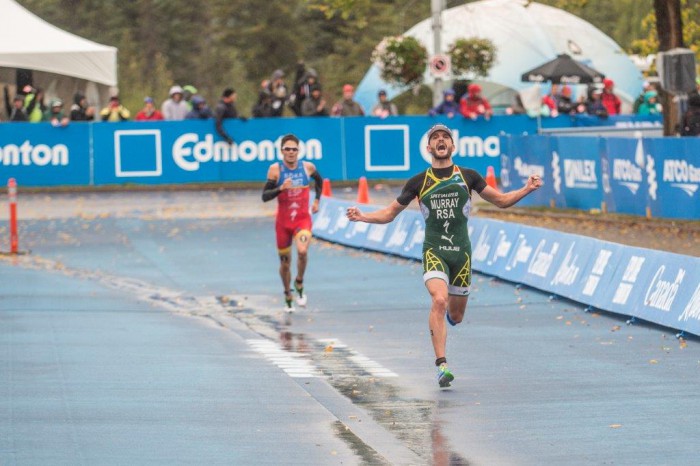 There is no doubt that 2015 was his best year yet as a professional triathlete and Richard Murray could not be happier with the way it all went.

Since winning WTS Hamburg in 2012 – it was seen as his break through year – he has been a regular contender, but the victory eluded him. Last year he managed various podium places including a second place at WTS London, but a bad end to his season ruined it somewhat. This year Murray and his coach Joel Filliol did things a bit different. There was less racing, less traveling and more training with Filliol and the squad. He was also in Europe during winter – missing out on the South African summer like many other pro athletes – to work with his coach on his swimming.

“After finishing 52nd at last year’s WTS Grand Finale and not being able to improve on my overall fifth place in the world rankings, my coach and I sat down and had a long discussion on how me can make sure it does not happen again. We also worked out a plan for my swimming; which is the discipline I really wanted to improve on. Looking back on what happened since the season started I can only be happy with how it all worked out,” said Murray.

Along with winning WTS Edmonton the highlight of the season was for sure qualifying for the Olympic Games in Rio next year. There was much uncertainty beforehand if he would race because of financial constraints, but in the end it all worked out and Murray got some valuable exposure to the conditions and route in Rio. “My form was good at the Rio Test Event and that helped me a lot to give a good performance on the day. Hopefully there is more to come in August next year!”

Murray always has high expectations and hopes, but 2015 surpassed all his expectations. “It’s definitely been more that what I expected. I always believed I can do it, it was just a case of keep working hard and never giving up.”

He added: “It is definitely my best season yet and by finishing fourth overall in the world rankings I managed my best position here as well. I have improved on my swimming and that made a big difference in general. I am still a few seconds behind coming out of the water and I still work very hard on the bike, but progress has been made. Another big season is coming in 2016 and even though I just finished a great season I don’t want to take anything for granted. I will once again work hard in the pre-season and once again I will sit down with the coach to make sure we build on what was done in 2015.”

Murray ended his season with a second place at the Island House Invitational Triathlon last weekend where 20 of the world’s best triathletes will compete in a unique triathlon format on the island of the Bahamas.