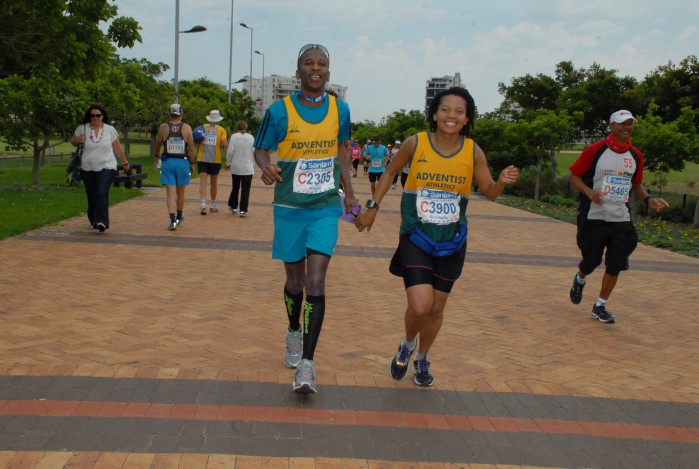 It seems Panda Qamata of Cape Town has the ‘Midas Touch’ when it comes to running-related competitions, which will see him packing for Paris next year. – BY SEAN FALCONER

Having never won anything before, Panda Qamata (39) was understandably elated when he won a pair of New Balance shoes for submitting the winning Athletes in Action photo for the November 2014 edition of Modern Athlete. Those shoes were immediately put to good use, as Panda was already in training for the 2015 Old Mutual Two Oceans and Comrades ultra-marathons. “I was so excited when I received the e-mail from Modern Athlete, because I had never won anything before, and I wanted to change my running shoes anyway, so it came at just the right time.”

Then a few months ago he heard that he was one of 10 finalists in the competition to win a trip for two to the 2016 Paris Marathon, thanks to having entered the Sanlam Cape Town Marathon, but at first Panda thought it just sounded too good to be true. “When I entered the marathon, I entered for myself and four other club members who do not have a credit card, so when the organisers contacted me to say I was a finalist, I still asked if they were sure it was actually me… Then on the Thursday night before the race I received a call from organiser Janet Wellham, asking me to come to the pre-race media conference on the Friday. Disbelief, shock… I didn’t sleep much that night, because I was so excited! Also, I was planning to chase a sub-four in the race that Sunday, because I had been struggling to get there, with a 4:12 at Soweto and 4:15 in the Peninsula, but the sheer joy of winning that prize carried me to a new PB of 3:56!”

Excitement Building
“My wife Abongile and I are so very excited about this trip, because Paris is on a Sunday, which means we can run it. We are Seventh Day Adventists, so we don’t run on Saturdays, our Sabbath… I was actually going to decline the prize if the race was on a Saturday. Even better, the race will be at the same time as our tenth wedding anniversary in April. We were planning an overseas running holiday later in 2016, so winning this trip to France will save us a lot of money while still giving us an overseas anniversary holiday.”

When asked about race-day plans for Paris, Panda says it will definitely be more sight-seeing than racing. “The Two Oceans is just a week before Paris, so I just want to run a sub-five-hour with my wife in Paris. She is normally 30 to 40 minutes behind me in marathons, so we’ll just take it easy and treat it like a honeymoon race, and then we’re planning to extend the trip a bit and also go run a marathon in Rome a week after Paris.”

Getting Into Running
Born in Port St Johns, Panda studied mechanical engineering in Cape Town and then worked in various locations around South Africa, including Johannesburg and Port Elizabeth. In 2006 he married Abongile, having met her through the SDA Church in Umtata, and in 2012 they moved back to Cape Town, now with two young kids, and he took up the position as Facilities Manager at Artscape. He started his athletic career with various walking events in 2004 and 2005, then upgraded to running. By 2007 he was regularly running half marathons, and then in 2010 he stepped up to 30km, then the marathon in 2011, with the aim to do the Two Oceans and Comrades in 2014. He has now done two of each. Meanwhile, Abongile ran her first marathon last year in Cape Town, then completed the Two Oceans and Comrades this year.

Both are avid runners, but due to their religion it has not always been easy to find races to run. “We run the Two Oceans on the Friday, and Comrades is fine as it is on a Sunday. It was easier when we lived in Gauteng, where most of the races in Johannesburg are on Sundays, and it is okay in the Cape, but it was terrible living in PE from 2008 to 2011, as there were no races on Sundays, except for the Spar Ladies race. We had to fly to Cape Town all the time just to run some races. That is why we are so glad Paris in on a Sunday!”