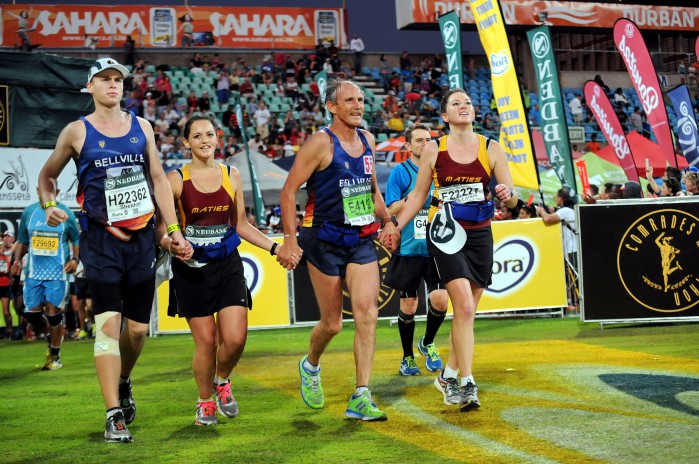 He has 38 consecutive Comrades finishes to his name as well as 29 Two Oceans medals, making him one of the most ‘decorated’ ultra runners in South Africa, and he is also a former SA 50km Race Walking Champion, but Wietsche van der Westhuizen prefers to be known for his popular long training runs on Saturday mornings and for helping other runners achieve their endurance goals. – BY SEAN FALCONER

Most Friday afternoons you’ll find Wiets (58) taking about three hours off work at his security installation business in the northern suburbs of Cape Town to drive around fetching water, Coke and ice for the next ‘Wietse Run’ 28km training run. Then on Saturday mornings he’s up at 4am to get everything ready for the 5:30am start from Willowbridge Mall in Tyger Valley, where he is normally joined by around 200 runners, and up to 360 in peak ultra season. The runners pay a voluntary R20 fee and can choose to do 6, 12, 20 or 28km, there are three water tables and six cars to support the runners, various businesses in the mall support the runners with products, and once a month there are even valuable lucky draw prizes worth up to R5000. It’s an incredible operation, which Wiets has been running for close on a decade now.

“18 years ago we moved down to Cape Town and I joined a group of guys from Bellville Athletic Club doing a 28km training run along the Big Mama route most Saturdays. They used to put Coke and water out on the road, hidden in the grass, and we did that for about 10 years,” says Wiets. “Then four of the main guys stopped running and I decided to take over. We made the seconding more formal, with a car driving on the route to give us drinks, usually driven by my wife Wilna – she’s not a runner, but I can wake her up at 4am and she’ll put on her tracksuit and be there for me. What an incredible woman! Today we have six cars, and the whole shopping centre is involved, especially Dis-Chem and Pick n Pay.”

Doing this most Saturday mornings is quite some undertaking, but Wiets says it is all about giving back to his fellow athletes. “A few years ago I realised there were a lot of people battling to get under five hours for the marathon to qualify for Oceans and Comrades, so I helped them, and over the years I have promised so many guys to help them train for and run the Comrades… that’s what keeps me coming back, training all these youngsters and getting guys off the couch and running. But what they don’t realise is that they are actually helping me: You won’t find me even doing a 5km run on my own, but I usually have at least 20 youngsters running with me in the week, and then 200-plus on the weekend. That’s why I organise these long runs… people think I am helping them, but they are actually helping me!” he laughs

Bug Bit in Beaufort
Wiets grew up in Beaufort West, where his father worked on the railways, and one family friend from Cape Town that visited quite often was a good runner and race walker. “When I was in standard four, he said I should come join him on a run – I didn’t realise he wanted to run about 15 to 20 kays, out of town to the airfield and back!” However, the bug bit and Wiets began doing athletics, cross-country and race walking at school. His father was transferred to Johannesburg two years later, and Wiets went on to study teaching at Pukke in Potchefstroom, where he also became a regular road runner. Then in 1978 a friend at varsity entered him for the Two Oceans down in Cape Town. “Luckily my dad worked for the railways, so I got a free ticket, and I pitched up and just did a 56km run in five hours 44 minutes. I was almost dead! In those days you didn’t need to qualify, so I had gone from nowhere to my first ultra.”

And more was to follow… “At Oceans they handed out a small A5 flyer for Comrades, entry was something like R5, but because I was still under-age, I had to get my dad to sign it, so I waited till he was reading the newspaper and just slipped it in front of him. The week before the race I went to ask him for some money and he said, ‘Over my dead body will you run Comrades!’ So I traded in all my empty cooldrink bottles and off I went to Comrades with R10 in my pocket – that was enough to pay for petrol, food and accommodation for myself and my friend Ferdi Botha, who went with to second me!”

Many Highlights
Today Wiets has run over 530 standard marathons and over 200 ultras – he only keeps a log of the long ones, because everything shorter than 42km is just a training run – and he can also look back on some great race walking memories. “I was organising a club trip to PE for the Train Race in the early 90s, and at the same time was organising the Transvaal Race Walking Champs in Krugersdorp. About 10 minutes before the start, I decided to take part, and I didn’t realise it but I qualified for the SA Race Walking Champs. The Monday night before we were supposed to leave for PE, the province phoned to say I had been selected to represent Transvaal that coming Saturday at the SA Champs. I said no ways, I’m going to PE, but they said if I go, they will ban me for two years from all athletics, so I had to drop the train trip and go to SA’s. I decided to show them, by taking it slow, and for the first 30-plus kays I was just having a relaxed walk. But then I started catching the guys and in the last few kays I realised something was happening. I was regularly doing ultras up to 100km back then, so I had an endurance advantage, and that year I won the SA 50km race walking title!”

While that win is one of his fond memories of his athletic career, Wiets says there are three main highlights that really stand out: Running his first sub-three-hour marathon at the Winelands in Stellenbosch, and his first Two Oceans and Comrades silver medals, both achieved in 1983. However, he says those highlights are nothing compared to the four emotional highlights of his life: Marrying Wilna, the birth of his two daughters, Louise and Wilandie, and then finishing the 2014 Comrades with both daughters by his side. “We played through it in 2014, just having fun and finishing in 11:46. My daughters grew up with running, so it was an incredible moment for me to finish their first Comrades with them.”

Going for 50…
There are currently nine runners in the 40 Comrades Club, with a further four set to join in 2016, and another five, including Wiets, set to join in 2017, if everything goes to plan, and he believes he could even get to 50. “I will be 69 when I get there, as will Alan Robb, but from 40 onwards, who can tell what will happen? You always have to remember that being able to run is a blessing, and it gets tougher by the year as you get older… but what I do know is that my 40th is going to be one big party. My daughters and my two brothers, Marius and Hendrik will be running with me, plus my niece, as well as many running friends, some of whom are coming out of retirement for it. Now that’s a party I am looking forward to!”