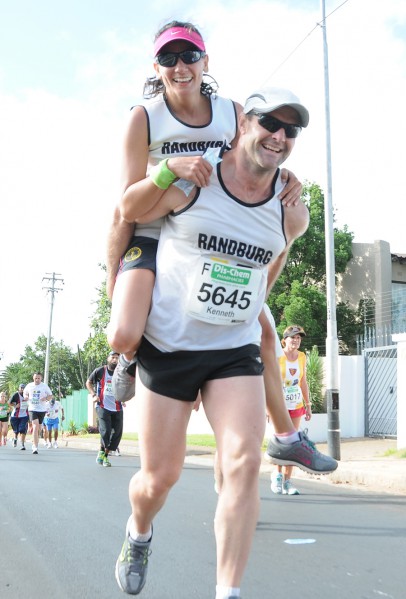 Although the name Dischem Half Marathon has been with us since the year 2000, the event itself goes back even further.

Johnny Halberstadt (1:07:01) and Sonja Laxton (1:24:15) were the first man and women home at the first half marathon in 1981 which was organised by the Bedfordview Country Club – Athletics.

But in those early years, the organisation of a race didn’t have the sophisticated technology we now take for granted today which can give an athlete “real time” results after an event. Everything had to be done manually.

Two club members Rob and Penny Oliver were appointed timing officials and were given two stopwatches and were given a “crash course” in timing by attending a race at Callies Immelman Stadium and practice time keeping at that race before actually doing this at the upcoming race.

After the race, the organisers had to rush back to Mary Howorth’s office, type out the 700 results before rushing back to the traditional braai with the other club members at Giloolys Farm. After the results were photostatted the next day, a crew from the club would then get together that Monday night to fold these results and fill envelopes, which would then be sent to all 700 athletes who took part in the race.

By 1988, the event had moved to Eastgate Shopping Centre parking lot and there was a record field of 5000 runners. Unlike today’s events, there were no pre-entries and all entries were taken on the morning of the race.

That race, according to the website, was memorable because there was an “error” regarding the “running man” trophies given to each participant. Some of the trophies arrived without the bronzing so many received a little plastic man as a reminder that they had run this race. Fortunately, errors like these have disappeared and runners can now expect beautiful medals as they cross the finish line.

Up until the 1993 event, Bliss Dairies was the sponsor of this event but when this company was absorbed by the Barlow’s Group, this company disappeared and Reebok came on board as a sponsor from 1993 to 2000.

Dischem came on board in 2000 and is still the sponsor of this event, which is constantly ranked in the top 10 and some even say the top three in the country.

Last year’s Dischem Half Marathon saw first man home Elroy Galant in a time of 1:07:24. Rene Kalmer was the first woman home, winning in a time of 1:18:26. So, although the men’s times are roughly the same, women athletes seem to be getting better and better every year compared to the 1981 result.

Participation of the event also seems to grow year on year with 8 000 runners participating in the 2015 event.

The 2016 Dischem Half Marathon will take place on Sunday 17 January at the Bedfordview Virgin Active Club. The route remains the same as previous years, taking runners through the picturesque streets of Bedfordview.

There will also be the ever-popular 5km Dash Fun Run in conjunction with the half marathon. This shorter event serves to give those not ready for a half marathon a race day experience. Although previously organised as a race, this is now classified as a fun run and entire families can enjoy a healthy but fun day out.

Athletes also return to the event every year because of its reputation as a well organised event with a “top shelf” goodie bag (courtesy of Dischem) and a T-shirt. It is regarded as a “must do” event which opens many runners’ yearly race calendar.

Online entries are open. Check out http://www.dischem21.co.za/race-info/entries/ for more information.