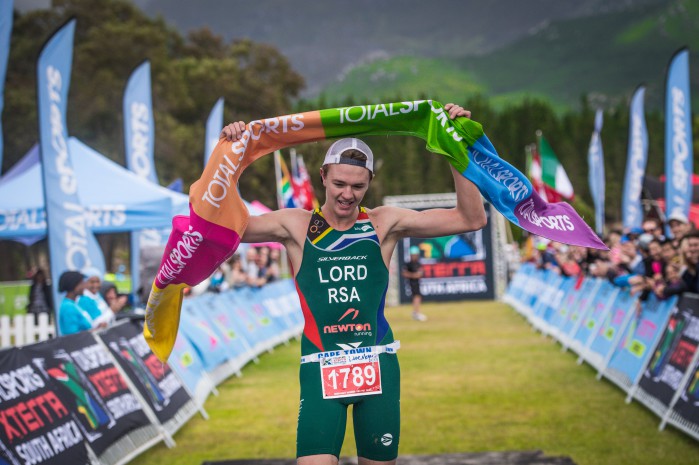 With a World Championship title to his name, Michael Lord has the triathlon world at his feet, but this well-grounded young man still has his sights firmly set on his studies and making sure he uses his time effectively in between all his sporting activities. – BY SEAN FALCONER

Maties first-year geology student Michael Lord went to Sardinia, Italy for the ITU Cross Triathlon World Champs at the end of September with a point to prove. Having finished second in the junior elite category at the previous World Champs in Zittau, Germany in 2014, the 19-year-old wanted to win the title in his last year as a junior, but he says he went into the event feeling relaxed. “I wasn’t nervous on race day, because you can only do as well as you can. Also, I had spent a week in Sardinia acclimatising and learning the course, so I knew all the lines and knew I could make up time on the bike, even against faster riders.”

Racing in good weather conditions, Michael came out of the 750m swim in fourth position, just a few seconds behind the leaders, and was first out of transition. On the 19km bike leg he soon began to open a gap on the chasing athletes, especially when the leading juniors caught up to the backmarkers in the elite women’s race – then Michael says his strategy was to put as many of the women as he could between him and the chasers. In the 6km run leg, he had a lead of a minute, which he maintained right to the end, although he gave up 40 seconds when he missed the entry into the finish straight and had to walk back to find it. Then, having claimed a World Champs title and celebrated standing on top of the podium, he hit the books again – because he had a big chemistry test the Monday evening after he got back to Stellenbosch!

“Man, that test was rough – I wrote for over two hours, and I think I did enough to pass. Studying while competing overseas is not easy, but I still managed to get some done while I was in Italy. I find the pure maths and physics the most challenging of my B.Sc Earth Sciences subjects, but I passed everything in the first semester, so I just want to pass everything in the second semester, because next year I won’t have either subject any more.”

The young man’s attraction to geology stems from his father, who also worked as a geologist. “He told me stories of travelling a lot thanks to work, which appeals to me, like taking various survey trips into African countries for weeks at a time, plus work opportunities in the field are generally good. However, with the Chinese economy currently down, geologists are suddenly struggling for work for the first time, since China buys much of South Africa’s mineral resources. Hopefully that will have changed by the time I start working, and that may also affect my decision which area to specialise in.”

Promising Young Years
Michael grew up in a sporty family based in Somerset West that used to regularly go for hikes and mountain bike rides together. He began doing triathlons and duathlons at the age of eight, and won his first SA Junior title at the age of nine. “I remember my first triathlon at the Coetzenberg Dam here in Stellenbosch, and I have been doing the sport ever since,” says Michael. “Back when I started the Western Province had a very strong group of juniors that were well looked after by Tony Bradford, and we used to dominate the podiums at SA Champs. I still love the sport and the lifestyle.”

In primary school Michael did cross-country and swimming, and then in high school at Paul Roos Gymnasium he played hockey and waterpolo, rode for the school’s talented mountain biking squad and sometimes did athletics – and sang in the choir – but triathlon remained his focus. Meanwhile, his younger sister Megan also got into triathlon, but is now focused on hockey, having made the Boland Schools’ team, and dad Kim’s provincial squash team won the 2015 SA Squash Champs title in the 40-44 age category, despite only having one player in that age bracket and all the others being much older – so Michael comes from talented sporting genes.

Preference for Trails
Having enjoyed much success as a junior in road tri’s, Michael says he much prefers the off-road events these days. “I find the road events a bit boring, especially the biking legs. Mountain biking is always more interesting, especially for that ‘X factor’ up in the mountains, and there are also far less spectators, so you have to motivate yourself. Besides the challenge, scenery and enjoyment, there is more of a mental aspect to it as well.”

Unsurprisingly, Michael says his favourite event on the calendar is the two-day Fedhealth XTERRA Grabouw, the off-road tri in February that not only serves as the SA XTERRA Champs, but also as the African qualifier for the Cross Tri World Champs. This year Michael won the XTERRA Lite overall for the third time on the Saturday, also taking the 15-19 age category as he crossed the line just over two minutes clear of the next athlete. Then the following day he also raced the XTERRA Full, this time going in the 20-24 category because there is no junior category for the longer event, and not only came home 14th overall in the men’s race, but also first in the 20-24 age category, although he almost didn’t finish the race…

“It was not an important race for me, as my focus had been on the Lite the previous day, and I actually only did the Full so that I could check out the mountain bike leg. So when I got a flat tyre near the end and had to run the last 2km pushing my bike, I was ready to call it a day, but when I got to transition they told me I was still right up with the top 10, so I decided to run,” says Michael. “Out of all the triathlons that I’ve taken part in over the past 11 years, the XTERRA Grabouw is the best route and the best organised triathlon by far, and we could easily hold the World Champs there. The run route is amazing – I was just smiling the whole race!”

Grounded Attitude
What is surprising is that Michael does not specifically want to pursue a professional career in triathlon, in spite of his long track record of success in the sport and his recent World Championship title. “I would like to travel and race on the international circuit for one year after varsity, to see how well I can do, but I’m not planning to go pro. To do that you have to find sponsors to pay for you. I’m very fortunate right now to be sponsored or supported by Jeep Team, Silverback Cycles, Torq Nutrition, XTERRA Wetsuits and Mason’s Bike Inn, and they’ve all been very good to me, but finding sponsors for a pro career is very hard.”

“Still, if somebody does offer to pay me to race, why not, I would consider it, knowing I have a decent degree to come back to afterwards – but I would have to find something to do at the same time, because you have so much free time. I can’t just lie around in between training sessions and races, I would need to run a business or do something to pay my way. That’s why it is working for me now while I study, because I train early in the morning, then go to class or study… although sometimes I am too tired to study. But I can’t just lie around.”

Racing Plans
With a number of years of university still ahead of him, Michael says he will continue racing triathlons and other multi-sport events, but from next year he will no longer be able to compete as a junior. “This was my last year in the under-19 category and next year I will be in the under-23s, but I am keen to see how I go in Grabouw, not just in my age category, but also against the elites. The nice thing for me is that while they’re always under pressure to perform, I won’t be, so I can just enjoy my race – and I will continue to give thanks to Our Lord for giving me this ability. One of the main benefits of this kind of exposure is being able to witness a bit.”