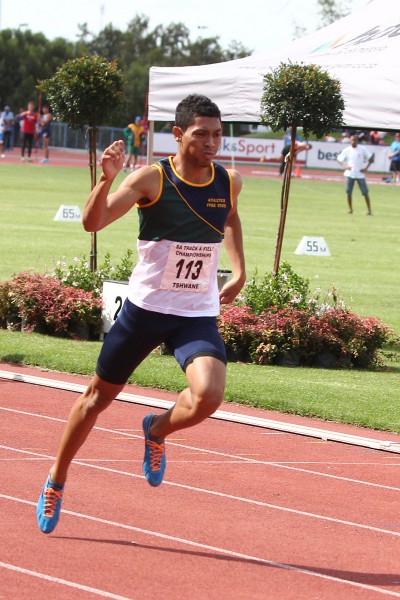 When Wayde van Niekerk looks back on 2015, he’ll probably describe it as the year he arrived. He had already established himself as one of the world’s best in the 400m sprint, but this year the 23-year-old Bloemfontein-based sprinter has not only rewritten the record books, but also claimed the world crown in the 400m sprint at the IAAF World Championships in Beijing – even if it did once again leave him lying shattered on the track. – BY SEAN FALCONER

The 400m final of the 2015 World Champs ended on a worrying note for South African fans watching on television. First came the elation of watching Wayde van Niekerk power home to take the gold medal in a world class 43.48 seconds, ahead of former World Champ LaShawn Merrit of the USA (43.65) and Olympic and Commonwealth Champ Kirani James of Grenada (43.78), giving South Africa its first ever World Champion in a sprint event and making Wayde the first African athlete to dip under 44 seconds and the fourth-fastest one-lap sprinter of all time, just a mere three tenths of a second away from Michael Johnson’s World Record of 43.18, in the first race ever to feature three men dipping under 44 seconds. Then followed despair as we saw our new World Champ collapse on the track and be wheeled off to hospital on a stretcher.

Fortunately, there was nothing serious the matter with Wayde – he was simply totally exhausted after his gold-medal effort. The 400m is renowned for being one of the most brutal track events, as the body basically starts shutting down towards the end of the race, and according to Wayde’s coach, Anna ‘Tannie Ans’ Botha, it is normal for Wayde to leave it all out on the track, as he did in Beijing. “When he goes into a race like that, he absolutely gives it his all,” she says. “He gets very nauseous after he runs fast races, so it’s normal, even though he fights the thought of throwing up.”

By the following day, having been discharged from hospital in the early hours of the morning, Wayde returned to the Bird’s Nest Stadium to collect his gold medal, and in a post-ceremony interview, he finally got to tell the world about his race, which he described as nerve-wracking. “I might have looked composed on the track, but just lying on my bed the night before the race was not the best feeling ever. I sang the national anthem to myself to fall asleep… In the race, I knew that I had a quality athlete like LaShawn Merritt on the outside of me and I had to catch up with him as soon as possible. When I hit the 200-metre line, more or less, I saw that I had a slight advantage and I just started praying, asking God to not let go of me. I started pushing harder and harder, but the last 50 metres my legs just started sinking in. But I just had to keep on fighting.”

Born to Run
Wayde was born in Cape Town and later moved to Bloemfontein, where he attended Grey College before going on to study marketing at the University of the Free State. He says his love of sport started at a young age due to his family being very sporty. “I was always playing games in the streets, parks and at school, with my cousins and friends. As a kid, I tried everything – tennis, rugby, athletics and squash. You name it, I tried it! Eventually, in high school, I pursued athletics and my teacher referred me to a coach where I improved and started growing in the sport. That’s when my dreams and goals started to develop into something more.”

The build-up to that glorious moment in Beijing really started in 2013 when Wayde changed his focus from the 200m to the 400m, having earlier also been a high-jumper. He had finished fourth in the 200m at the 2010 World Junior Championships in Canada, and then blitzed to a 20.57 time to claim the SA 200m title in 2011, but persistent hamstring problems meant that explosive sprinting put too much pressure on his legs. The solution was simple: Tannie Ans suggested he run some 400m races, to improve his endurance and recovery training. The rest as, they say, is history.

One-lap Wonder
He soon brought his 400m PB down from 46.43 to 45.09 and finished the 2013 season in the world’s top 20. “It was a big surprise, as I didn’t expect to run that quickly,” says Wayde. “I was raw at the event and still in the rehab phase from the injuries, but it was also a relief, because it showed me I was stronger and finally over the injuries.” However, disappointment followed… At the 2013 Summer Universiade meet in Kazan, Russia, he just missed out on the final as the fastest non-qualifier, which was somewhat offset by helping the 4x400m relay team win bronze, and then at the 2013 World Champs in Moscow, an exhausted Wayde failed to make it past the first round heats of the 400m, the long season having left him drained of speed and power.

To fix the problem, he hit the gym: “It was the first time I’d done specific gym work – I even had a personal trainer – but the balance finally started to come together. The work I did helped condition me for the next long, hard season, and being able to handle three rounds in a championship,” he says. That saw him dip below 45 seconds for the first time early in 2014 as he clocked 44.92 to win the SA title, and then in June he stepped it up by running 44.38 at the New York Diamond League meet, to shatter the 15-year-old South African record of 44.59, long co-held by Arnaud Malherbe and Hendrick Mokganyetsi. “It had been a goal of mine to beat the record and the run was a blessing. I went out feeling extremely nervous, but then the race started and before I knew it, I was in front with LaShawn Merritt. I held on as long as I possibly could. It’s only then that I realised I got the national record!”

He then anchored the African team to victory in the 4x400m relay at the Continental Cup, holding off the charge of European Champion Martin Rooney, and while trying to recover from that race, he met one of his idols, Felix Sanchez of the Dominican Republic. Having won the 400m Hurdles World Champs titles in 2001 and 2003 as well as the Olympic title in 2004, Felix had returned from long-term injury to regain his Olympic title at the 2012 London Olympics, so Wayde felt he had something in common with the great man, and they ended up sharing notes on how to handle the severe pain and fatigue of a single-lap sprint. “I was actually lying on the floor throwing up when he came up to me and congratulated me on my run! Even though I felt like I was dying, it was a special moment for me. He even advised me on how I should handle such a thing!” That sparked a friendship that continues today.

Medals and Records
Wayde moved on to the 2014 Commonwealth Games in Glasgow and won the silver medal behind Kirani James, clocking 44.68, and less than two weeks later won another silver in the African Champs in Morocco. In Glasgow, he once again found himself feeling shattered after giving it his all in the final, and says he could barely join the traditional victory lap. “The same thing happened in that I took a while to recover from the severe fatigue. I managed to eventually grab a flag and get a few pictures with some of the guys who supported me, but I don’t think I even went on a victory lap. After about ten minutes or so I had to suck it up, because I had quite a few interviews waiting for me.”

While 2014 was a great year for Wayde, it was just a precursor of still greater things to come in 2015. In June he clocked 31.63 over the seldom-raced 300m distance at the IAAF Diamond League meeting in Birmingham in the UK, setting a new SA and African record. He followed that up with another SA 400m record, 44.24, in the New York Diamond League meet, and then in July he became the first South African to dip under 44 seconds as he crossed the line in 43.96 at the Paris leg of the Diamond League, setting a new SA and African record, and handing Kirani his first loss of the year. And still Wayde was not done: Returning to the 200m, he became the first SA sprinter to dip under 20 seconds, clocking 19.94 to be beat Anaso Jobodwana’s still new SA record of 20.04.

More to Come…
Speaking after his 44.24 run, Wayde said, “It wasn’t easy, but I think I planned it well and really felt good in the last 200m. The first 200m was a bit relaxed, but that meant I saved a lot for the last 200m. Still, I feel there’s definitely still room for improvement, and my goal for the rest of 2015 is to continue pushing myself to improve. I hope this was just the beginning of great things ahead for me.” How true those words would turn out to be, come the Beijing World Champs. Now, with the World Champs title to his name, Wayde says a gold medal at the Rio Olympics next year is his next big goal, and beating that long-standing World Record could be on the horizon as well. “My goal is to try to get better with each and every race, so if that means the World Record will be mine at the end of the day, I'll just be thankful and grateful to the Lord that he gave it to me.”