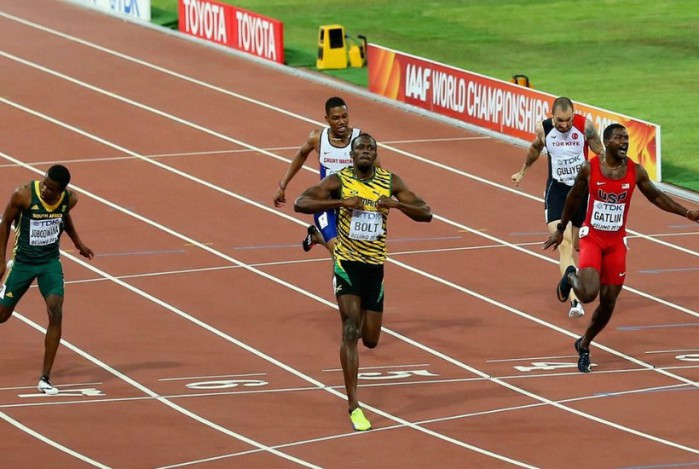 Even though I could not compete due to injury, I thoroughly enjoyed watching the recent World Champs in China, especially the terrific performances by our South African athletes. – BY RENÉ KALMER

I'm sure most of us suffered from post-champs depression after we witnessed some spectacular athletic performances in the Birds Nest Stadium at the recent IAAF World Championships in Beijing, China. I even suffered from ‘jetlag’ after getting up at 3am to watch the 50km walk in the early hours of the morning…

All track and field fanatics breathed a sigh of relief when Jamaica's Usain Bolt defended both his 100m and 200m World titles against the controversial Justin Gatlin from the USA. But our eyes were on Team South Africa’s sprinters, and just like Bolt, they did not disappoint, even though Akani Simbine just missed out on qualifying for the 100m final and Carina Horn came so close to finally beating Evette de Klerk's 25-year-old 11.06 SA record when she clocked 11.08 in her 100m heat. Unfortunately, our 4x100m men's relay team failed to complete their heat, when they dropped the baton at the first change over.

Medals and Records
Day five was definitely the highlight for the people of South Africa! Not only did we get to witness the greatest 400m men's race ever, where all three medallists dipped under 44 seconds, but our golden boy Wayde van Niekerk topped the podium with a new personal best time of 43.48 seconds. He not only smashed the African and South African records, but also became the fourth-fastest one-lapper ever. I just felt so sorry that Wayde was too exhausted to celebrate his golden performance with a victory lap, as he was carried off the track on a stretcher. He sure left it all out on the track!

A day later Anaso Jobodwana kept Mzansi's celebrations going when he claimed the bronze medal in the men's 200m final, behind Usain Bolt and Justin Gatlin. Anaso also clocked 19.87 to claim back his SA record from Wayde, who had broken it earlier the year in Luzern, Switzerland, when he became the first South African to run a sub-20 200m. Then on the last day of the Championships, Sunette Viljoen did us proud when she collected her second bronze medal in the javelin with a very impressive throw of 66.13m. She also won bronze at the 2011 World Championships in Deagu, South Korea.

Highs and Lows
My personal highlight of the Champs was the 5000m for women. After a relatively slow first 2000m of 6:06, Almaz Ayana from Ethiopia took over the pacing duties and just never looked back… She destroyed the women's field by clocking the last 3000m in 8:20 and winning the race in 14:26. It was a huge, huge upset, and to be honest, the pre-race favourite, 1500m World Champion and World Record holder for 5000m, Genzebe Dibaba, looked like she was looking for parking!

A heartbreaking moment for me was when Molly Huddle from the USA made a rookie mistake in the 10,000m for women by celebrating “her bronze medal” a split second too soon. Fellow American Emily Infeld nipped her on the line to claim the third place, and it is definitely a moment that neither will ever forget…

To everyone's great surprise, Kenya topped the final medal table for the first time since the World Championships started in 1983, with seven gold, six silver and three bronze medals. Kenya also bagged two rare individual wins outside of the middle distance events with Julius Yego winning the men's javelin with a world-leading throw of 92.72 metres, while Nicholas Bett was also a surprise winner in the 400m hurdles, in a fast time of 47.79.

Now for Rio!
But returning to our local heroes, Team South Africa really did us proud! Not only did we bag three medals, but most of the team members performed at or very close to their best, and three new SA records were set – along with Wayde and Anaso, Lebogang Shange set a new 20km Walk record of 1:21:42. Let’s hope that after these amazing performances by our athletes, that ASA and other sponsors will come to the party to support and back our athletes as much as possible. After all, it is less than 10 months to go to the Olympic Games in Rio de Janeiro… Let the countdown begin!