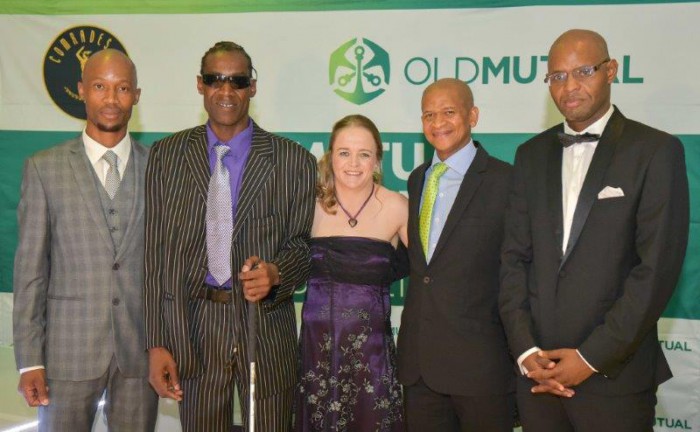 It was a night for honouring the truly deserved among us as the Comrades Marathon Association (CMA) hosted its annual awards gala in Pietermaritzburg on Friday, 23 October 2015.

The Old Mutual Spirit of Comrades awards gala celebrates three awesome individuals annually for their very human attributes of selflessness, dedication, perseverance and Ubuntu; combined with their love for The Ultimate Human Race.

The prestigious awards gala has been a defining feature of the CMA since 1991. The three Spirit of Comrades recipients are presented with a one-ounce, 24 carat gold medallion, courtesy of major co-sponsor, Old Mutual, as well as due recognition of their remarkable qualities.

The awardees are nominated by CMA members, Comrades Marathon runners and the general public; and are subject to the discretion of the CMA Board. The awards criteria place special emphasis on Comrades Marathon winners, legends, volunteers and otherwise ordinary heroes and heroines; who through individual acts of service, sacrifice, courage or perseverance, either in a single race or over a period of time, exhibit the noble qualities associated with The Ultimate Human Race.

The first awardee was Kabelo Ntsime (38). Kabelo is living proof that no matter how tough a start in life one has, with discipline and perseverance anything can be overcome. He survived five brutal years living on the streets of Johannesburg as a street child until he got help from a missionary school and a kind family who helped him to complete his schooling. He says, ‘I believe that all children deserve that opportunity in life to go to school and be a great citizen in the community.’

Kabelo is now married with three children and lives in Midrand. Kabelo believes that it is now his time to give back to the community and the future generations by doing what he can to empower the little ones. For four years, he taught Latin and ballroom dancing to physically challenged children. He says this was a deeply fulfilling activity that meant as much to him as it did to the kids.

Josiah Thugwana was the inspiration behind Kabelo taking up running. He has since done four consecutive Comrades Marathons, with his best time achieved at this year’s race. He also went a step further by signing up for Race for Charity and raised R13 000 for the Starfish Greathearts Foundation. His vision is for underprivileged people to dream big and achieve their goals. Kabelo tells us that his dream is to start a running club for children. He sees that our young South Africans have immense athletic talent. In his words, we need to forget about ourselves and focus on our younger generation.

The second recipient of the coveted Spirit of Comrades award was Heidi Joubert. Heidi was diagnosed with cystic fibrosis at six weeks old with a life expectancy of 10 years. She is now 32, mostly thanks to running. As a child, she spent months in hospital but with running, she only needs intravenous antibiotic treatment four times a year. She takes 17 medications daily.

The love for Comrades has been a very real part of Heidi’s family. Her mom, Susan came second in the 1978 Comrades Women’s Race. Both her mom and dad have run the race and are her biggest supporters. Heidi received her Comrades back-to-back medal this year. She says Comrades has been one of her life’s most amazing experiences, especially when her family was there to support her during her first race and to celebrate her finish with her.

Heidi loves horses and works in the equestrian field in Kyalami, exercising horses and enjoying the time spent with these gentle creatures. The trend for lung function in cystic fibrosis patients is to decrease by 3% annually. However, fortunately for Heidi, her lung function has improved with running and she managed to maintain it at 70% for five years.

Heidi says she has her good and bad days. When all is good, she runs every day and loves it. On bad days, her lungs hurt and it feels like she is breathing through a straw. She is grateful to her husband, Kenneth for his never-ending care and love. Her doctor, who has treated her for the past 12 years never stops motivating her and keeping her mentally strong.

Last but not least of the recipients was Richard Malose Monisi. This amazing individual has shown each one of us that you need not let a disability come between you and your dreams. Richard was born blind with cataracts. At the age of 10, he underwent an eye operation which resulted in 5% sight in his left eye. Richard went on to school at the Philadelphia School for the Blind and then got a job as a switchboard operator at Success College.

Richard first came into contact with the running fraternity through a Rocky Road Runners Club member named Gerald Fox who was training other blind runners at the time and offered to train him as well. Through his active participation and enjoyment of running, Richard has gone on to meet new people and travel which has boosted his morale.

Richard displayed true tenacity at the 2014 Ultimate Human Race when his pilot, Florence, bailed 16km out of Durban. He then hauled out his white stick and ran the remainder of the route on his own, completing the Comrades in under 10 hours.

This proud Green Number Club member has gone on to complete his 11th Comrades Marathon this year. Although he was once again abandoned by his pilot at Drummond, he completed the race on his own in a time of 8:50, earning him a well-deserved Bill Rowan medal.

Richard has been described as an extremely positive person who takes running without a pilot in his stride. He lives a simple life on his disability grant. The Comrades Marathon forms a huge part of Richard’s life. Together with his concern for others, comes the pride and joy of being part of the running community and a much loved and popular figure in the greater running fraternity.

Richard’s passion is to teach young disabled people that it is possible to exercise and join in mainstream events.

JOURNALIST OF THE YEAR: WESLEY BOTTON

This year’s Comrades Journalist of the Year was a reporter at The Citizen Newspaper, has completed the Comrades Marathon four times; and has written the most articles on The Ultimate Human Race this year. He is Wesley Botton. This popular sports reporter tells us that Comrades Marathon is more than a race. In his words: “It's an overwhelming adventure, and no matter how tough it may be to complete the gruelling event, something about it keeps drawing me back.”

The CMA is exceedingly proud and passionate about the Comrades Charity Drive which benefits 6 officially recognised charities. To this end, the CMA presents its Comrades Marathon Top Donor Award to the person who has raised the most funds for the Comrades Charities. The winner of the prized accolade was Carel Nolte who raised 153-thousand rand for the Comrades Charities this year.
Carel tells us that he loves everything about the Comrades. “My first Comrades was perfect. The camaraderie of runners; the people along the road who sing and cheer and give you support and sustenance; helping others after you have been helped; getting through the pain – because you can; and arriving at the stadium upon completing the race – it is all beyond exhilarating.”

The glitzy evening also saw the awarding of the Comrades Marathon Winners Blazers to the proudly South African 2015 winners Gift Kelehe and Caroline Wostmann. It was a proud moment for Gift, who has been dubbed ‘the gift of the nation’. Unfortunately, Caroline was out of the country and not able to attend the event.

The CMA is always mindful of the effort given off by individuals and organizations who have contributed in a significant way to the Comrades Marathon Association over the years. Due recognition and appreciation is accorded to these do-gooders for their outstanding service or for going beyond the call of duty in adding value to the Comrades Marathon via the CMA’s Certificate of Appreciation. These were presented to Formscaff and Biddulphs for 30 years of service to the CMA while Adcock-Ingram received due recognition for their 20 years of service to the CMA.

The CMA Life Membership Award is conferred upon members who have rendered outstanding meritorious service to the race. Alen Hattingh has served the CMA in various capacities for 28 years, starting out by volunteering at the Expo and Finish. Alen had served on the CMA Board for 4 years (2005-2006 and 2014-2015); and also headed up the Refreshment Station portfolio from 2007-2010.

Sifiso Nzuza has been in service of the race for over 10 years, being an active member of the CMA Board of Trustees and later the CMA Board since 2007. He has also been passionately involved in the Underprivileged Runners’ Project for many years.