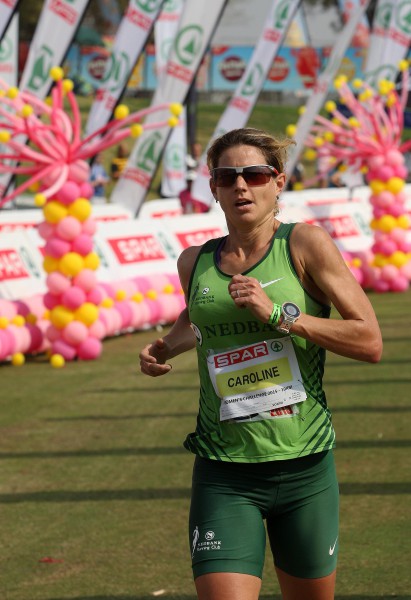 For Wöstmann it has been a quite busy weekend. On Saturday she proved that her training for the New York Marathon (1 November) is on track by winning the Capital Classic 21km.

The Comrades and Two Oceans champion just loves a good challenge and she has decided to try to qualify in the marathon for next year’s Olympic Games in Rio.

Lindsey Parry, Wöstmann’s Tuks/HPC coach, is quietly optimistic that she will be able to do so.
“Caroline is injury free and she has been training really hard. The fact that she was able to improve on all her best times over the various distances, is even more important. But I don’t want to put her under unnecessary pressure by speculating about the time she might be expected to run in New-York. I think that would be unfair, but I am prepared to say is that I am confident that she will improve significantly on her marathon time.”

One of the reasons why Wöstmann proved to be successful as an ultra-racer is her ability to not allow herself to be intimidated by her opponents. At the Two Oceans and the Comrades she managed to stick to her game plan, no matter what. She is hoping for a repeat performance in New York.
“I have no idea what will happen. I can only promise that I will run the best marathon I can, hoping that there will be doors that will open for me. If I do qualify for the Olympics, I plan to race another marathon in April. If I do not qualify, I will definitely be at the Two Oceans and Comrades again,” she said in an earlier interview.

The fact that Simbine received the Gauteng Sportsman of the year award is no surprise. On 1 July, when he won the 100 metres in a time of 9.99 seconds in Velenje, he became only the second South African athlete to break through the 10-second barrier.

He then went on to win the 100 metres in 9.97s at the Student Games in Gwangju, South Korea, equalling the South African record set by Henricho Bruintjies four days earlier. He is the first local sprinter to have twice broken 10 seconds in the 100 metres.