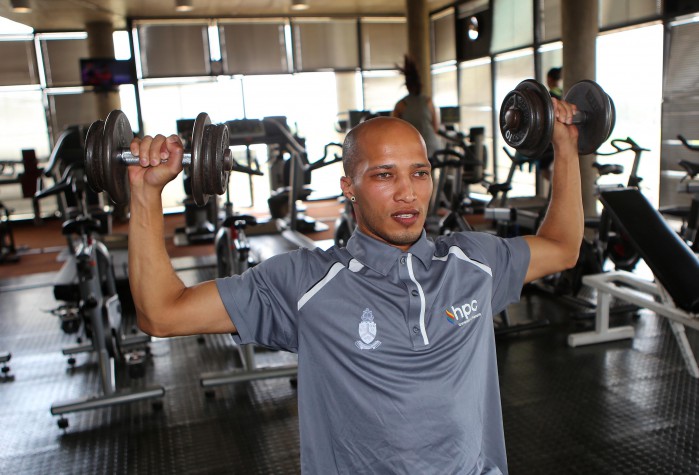 If Cornel Fredericks should line up in his starting blocks for the 400-hurdles final at the 2016 Olympic Games in Rio, it would be due to three words, namely: patience, persistence and resilience.

The 2014 Commonwealth Champion departed for England on Sunday (18 October) to start training in all earnest for next year’s Games. According to Fredericks not a day goes by without him thinking about these words, wondering how he can put them into practice. He realizes that if he manages to do so he will have a good chance of qualifying for the Olympic final. And, as he says, in the final anything can happen.

2015 was without doubt an extremely frustrating year for the Tuks/HPC athlete. It all began when problems with his Achilles heel prevented him from training properly. Another frustration was that there was uncertainty about who would coach him.

To cut to the chase, Fredericks had only a couple of opportunities to race during the entire season. His best performance was in Madrid in July where he finished fourth in 49.50s. This was good enough for him to qualify for the World Championships in Beijing but he did not compete in spite of being selected.

This was in sharp contrast with 2014 when Fredericks could seemingly do nothing wrong. In 13 races he only failed once to finish in the top three (finishing fourth) and was victorious on seven occasions. He won gold medals at the Commonwealth Games, the African Athletics Championships and the Continental Cup meeting. To top it all he finished third in the 400-hurdles Diamond League standings.

Fredericks admits that he went slightly off the rails because of his severe frustration.

“There were times when I was still out and about in the early mornings. I wandered about aimlessly, not really caring about anything. I began to eat all sorts of junk food because I could not see any reason why I should stick to a healthy diet if I am not able to race. I tended to do some other irrational things as well. In short I was really down and out. Luckily I have wonderful friends and family who really cared, especially my mom, Maureen. They made me realize that I have unfinished business on the track and that it would be foolhardy of me just to let go of my dreams and goals.

“I also had time to think during my five week holiday in Caledon and I came to the conclusion that I still have the hunger to become one of the best 400-hurdlers in the world.”

There was much speculation about why Fredericks did not compete at the World Championships in Beijing. Some of the rumours were quite upsetting to him, especially when it was hinted that he simply stayed away.

“There is nothing more special to me than representing South Africa at a major championship. When I do, it is important to me to do my utmost to win a medal for South Africa. That is why it hurt when it was said that I deliberately chose not to run in Beijing. Nothing could be further from the truth. As luck would have it I picked up a small hamstring tear. It was nothing serious but given my experience with previous injuries I decided the risk of racing was just too great. I was certainly not able to run flat-out and I really did not want to end up having to do another three months of rehabilitation. That is why I withdrew from the World Championships.”

The Tuks/HPC athlete becomes quite excited when he talks about going back to England to train under the guidance of Malcolm Arnold. Arnold is the national event coach for hurdles and a senior performance coach for UK Athletics. He has attended every Olympic Games since Mexico City in 1968 (12 in all) as a coach of National Teams. He has also been responsible for coaching athletes to win more than 70 major medals over 46 years.

“Malcolm is a strict coach who does not hesitate to call a spade a spade if he thinks it will help his athletes to excel.”

When asked if he would be prepared to represent South Africa in the 4×400-hurdles relay at the Games, Fredericks’s face lit up before he answered: “Yes, definitely.”

“I think it would be exciting to run the 4×400 relay. You only need three good 400m athletes because Wayde van Niekerk (400m world champion) will do the rest. I think South Africa will be able to win a medal in the relay, but I need to know by March whether or not I would be expected to take part. It is one thing to run a 400-hurdles race, but something quite different to run a flat 400 metres.”