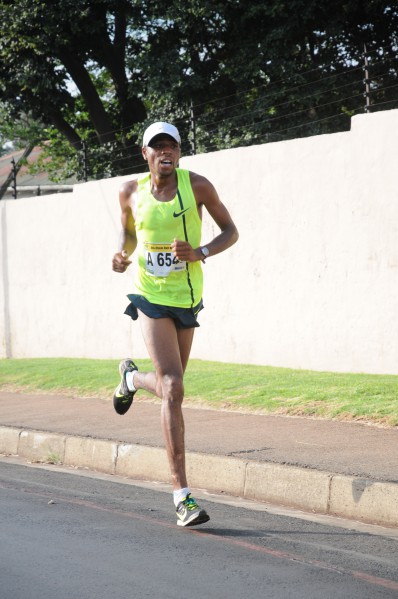 With the 2015 SA Half Marathon title to his name, Lucky Mohale is now gearing up for another shot at World Champs glory next year in Wales, and he says he is determined to do better than in past attempts. – BY SEAN FALCONER

Lucky Modike Mohale obviously enjoys running in Port Elizabeth: He won the SA Half Marathon Champs title there in 2010, and at the end of July he added a second 21km national title in the Windy City. The 30-year-old flyer from Thembisa in Gauteng came home in 1:02:06, pushed all the way to the line by Central Gauteng team mate Mbongeni Nxazozo, to claim his third national title, having also won the SA 10km Champs in 2011 in Germiston. “The weather at last year’s 21km Champs race was very bad, so I struggled and only finished fourth, but this year it was perfect, so I enjoyed the race much more,” says Lucky.

The win in PE capped a very successful year so far in half marathons for Lucky. He won the Dis-Chem Half in January in 1:07:40, having frustratingly finished in the top five in the previous three editions of the race, and then in April he set a new course record in the Birchwood Half, winning comfortably in 1:06:48. He also added another course record at the Adrienne Hersch Challenge in May, coming home in 1:07:05, one second faster than the previous record.

Wales Ticket Booked
The national title means that Lucky now automatically qualifies for the SA Team for the World Half Marathon Champs in Cardiff, Wales in March 2016, and he says that will be his next big goal. It will be the fifth time he represents his country, having previously run in the 2006 World Cross Country Champs in Fukuoka, Japan, where he finished 99th, followed by the IAAF World Championships in Daegu, South Korea, where he was selected for the SA marathon team and came home a disappointing 49th in 2:38:22. Then came the World Half Marathon Champs in Kavarna, Bulgaria in 2012, where Lucky once again finished 49th, clocking 1:07:17, and that was followed by his selection for the 2013 Africa Southern Region Cross Country Champs, where he finished 20th in the 12km race. To his credit, he says he still has to prove his worth to the SA team at the highest level.

“I have always been proud to represent my country, but I was not happy about my performances in SA colours, so I have changed the intensity of my training programme in order to run better at the next World Champs. My plans now are to run the Cape Town Marathon at the end of September and hopefully qualify for the SA marathon team for the Rio Olympics in 2016, and then I will focus on the shorter distances as I prepare for the World Half Marathon Champs.”

Star Potential
Lucky started running at the end of 2003, when he moved to Gauteng from the Limpopo Province. By early 2004 he was running races, and by 2005 he was regularly winning the junior category at races. Ten years later he is 30 years old, married with two young kids, a full-time athlete running for the Boxer Club, and still a regular on the podium at most of his races. He made his marathon debut in Cassablanca, Morocco in 2010 with a fifth-placed 2:13:35, which remains his PB. He was also third in the 2013 Sydney Marathon in Australia in 2:15:58, and finished second in the SA Marathon Champs race in 2013 with a 2:19:38.

Looking further ahead, Lucky says he sees his long-term future in the sport. “I want to help with the development of athletes in the rural areas all over the country, and to help them reach the top level as well, so I see my future as a coach, but my focus now is on my own running. Whether I go to Rio or not, my plan is to focus on the 21km and the marathon in the next few years – I have no plans to run ultras. You can’t just run for money, so I’m planning to run faster times, and the money will come after that.”