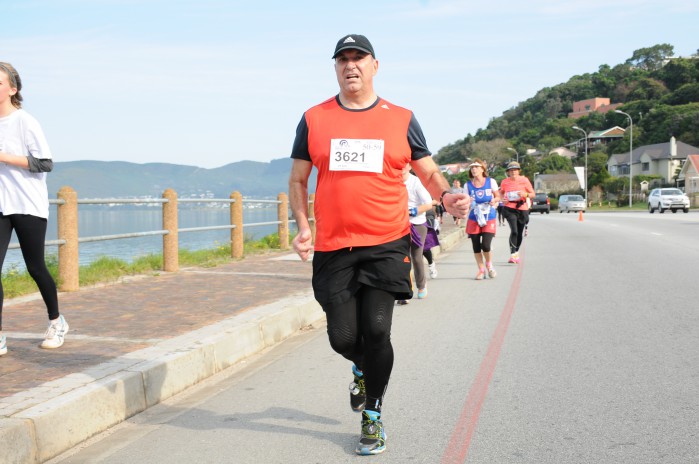 Peter Schoeman is one of those really active people. Apart from being the director of the Sales and Marketing Division of the City Lodge Hotel Group, he is also a scuba diver and a photographer… and in between he runs half marathons. – BY RAYMOND TRAVERS

Like many successful people, Peter’s demanding line of work pushed his other activities down the priority list, including keeping fit. “I used to run in the army,” says the 50-year-old, “but then your career gets so important, and you get so important, and you need to have that next job, the next title.” Then about 10 years ago, Peter had an epiphany. “I realised I was not feeling good. I wasn’t healthy, and my weight went up to 117 kilograms. I had to go to Big and Tall to get clothes, because I couldn’t go to Woolworths anymore… nothing fitted.” So he started walking – every day, for a year – and he got his weight down to about 100 kilograms. Then he started jogging.

“I then actually overdid it. I’d try and do 20, 40 or 60 kilometres per week, and quite a few half marathons over the weekends, so I got stress fractures left, right and centre.” A motorbike accident and subsequent “semi-knee” replacement compounded the problem, but Peter has since then gotten back on the road. “I try and run at least six kilometres per day, but it varies. I don’t do more than 10 kilometres, because I know my body can’t handle it. When I continuously do 10 kilometres per day, the stress fractures come back, so I just try and vary the short runs – sometimes I do a fast five, then a slow seven.” And he is back running events too, including a 2:30-odd half marathon in Knysna.

Globetrotter
Peter’s job takes him all over the world to attend trade shows and connect with possible clients, and this gives him amazing opportunities for both running and his other passions, photography and diving. His typical day starts at 6am, when he’ll go for a run. On his return, and if there is good light, he’ll go and take some photographs, and then he’ll head to the exhibition or show. “I try and go for a run in these amazing places, and obviously I want to get all my friends to be jealous, so I track it on RunKeeper, so they can see that I’ve just had a run through Central Park in New York, for example,” he quips.

Back home, Peter gets out of bed even earlier and can often be found at the gym as early as 4:30am. “In the winter months I run on a treadmill, because I’m too much of a sissie to run outside,” he smiles. In summer he has routes near home that take him through Melrose Arch, and in the evenings after work he’ll take his camera along when he walks the dogs, looking for that perfect shot. “My life can be quite intense, so I need these outlets, and you’ve got to try and balance it.”

Indulging Passions
Scuba diving has also helped bring that necessary balance into Peter’s life. “I dive a lot and most of my holidays are dive holidays, and that is when I’m the most relaxed. I like spending time underwater, because during work hours I talk to people all day long, and when I’m under the water, nobody talks to me. It’s like paradise, and just unbelievably beautiful.” He has literally dived all over the world, but lists the Seychelles, Maldives, Indonesia and South Africa’s own Sodwana Bay as his favourite dive locations, and he will also dive during overseas work trips, if there is time – and he always takes a camera underwater.

Peter’s love for photography started when he was in school. “I worked for a wedding photographer and I had to develop all those rolls of films, and then make the prints for the wedding couple, so I’d be in the darkroom, developing, mixing chemicals… all the stuff we had to do in those days.” These days, when Peter has some good shots, he puts them on the internet and gets his friends and contacts to give him feedback, and after that ‘stamp of approval,’ he will then send them to photographic stock websites. “I sell them online and earn a bit of extra money. It’s not huge yet, but I think that one day that will become my full-time thing. I’ll become a stock photographer.” (Who also dives and runs.)