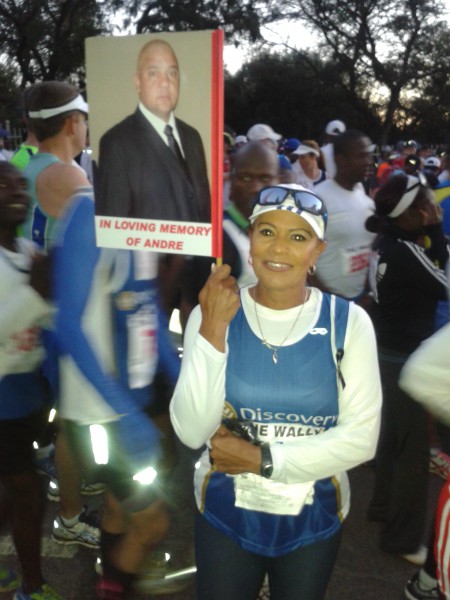 After suffering the sudden loss of my husband, it was my running family that got me back on my feet. – BY IRENE VAN ROOYEN

I started doing long distance running about 22 years ago and had the support of my wonderful husband Andre all those years. He never complained about the early mornings to take me to races or drop me off at gym, not even talking about the money spent going all over to do the different races. Unfortunately everything changed two years ago, coming back from doing the 2013 Wally Hayward Marathon, when he suffered a major heart attack and died in my arms.

Months passed by and I couldn't get myself back on the road, but thanks to two of my fellow runners, I was eventually convinced to do the Old Eds 21km later that same year. Entering the finish, I couldn't lift my head, knowing that there was no-one waiting for me at the line, but then all the people that knew started clapping and calling my name, running with me to the finish and crying with me. Thanks to my running family, I could face the rest of the day.

Not Ready Yet…
But it was all too emotional for me and I didn't go back out on the road until I went on holiday in George in December and ran a 10km race in Mossel Bay. It was a race on the beach, 5km out and back, and when I reached the 7km mark, I decided to take off my running shoes and take a dive in the sea. Something wonderful happened at that exact moment – I think God chose that time for me to see the beauty of life, because I was surrounded by colourful fish, and I could feel that some healing took place.

Coming back from George on the 6th of January, I opened my laptop and pre-entered most of the races I had run before, and I re-entered the Comrades Marathon, having skipped the 2013 run. I also decided to do all my races in memory of Andre, including the Wally Hayward Marathon, and I eventually ran seven half marathons, two 32km, four marathons and three ultras before the Comrades.

I didn't finish the Comrades in 2012 when he went with me, but I did last year, in 11:30:42, and had my best Comrades ever… not in terms of time, but the way I felt. And it is thanks to the support that my running family gave me, and still does, that I'm back full-time on the road and enjoying every minute spent running, knowing he is next to me.