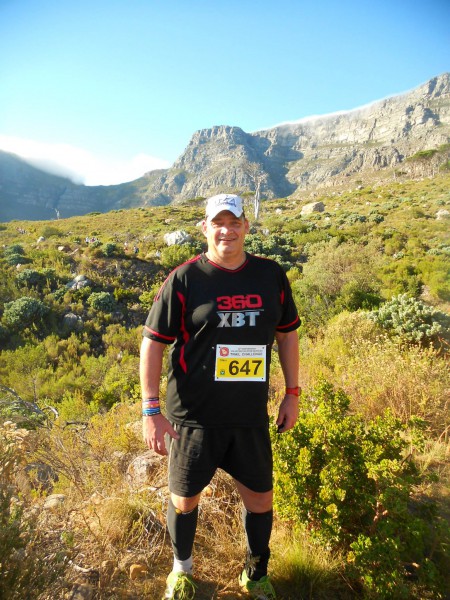 You’ll find him trundling along at the back of just about every trail run in the Cape, often with camera in hand and a big smile on his face, because Jacques Conradie absolutely loves his trail running, but not so very long ago he was considerably heavier and nowhere near fit enough to run a few metres, let alone trail ultras, and his remarkable journey to health and fitness is a story worth reading. – BY SEAN FALCONER

To say that Jacques Conradie (41) sticks out from the crowd is an understatement – he’s well over six feet tall and has a larger than life personality to go with his tallness. He also has a large figure, as he will be the first to admit. “I’ve never been a small person – even in school I was always the tallest, biggest guy around. I can’t remember a time that I’ve exactly been in good shape – the baby fat around the stomach has always seemed to hang around – and for that reason I tended to avoid photographs, always looking out of place next to the smaller, thinner people.”

He will also admit that he pretty much let himself go for many years, until November 2013, when he suffered yet another attack of gout in both legs, the worst he’d ever had. While bedridden, he says he did nothing but surf the Internet, and that was the start of a new journey to health and fitness. “Somehow I came across the Sleekgeek group on Facebook, and after spending days reading about all the transformations, I came across Ed Young’s story, which just resonated with me. I could identify with where he started and what he achieved, so there and then I decided that from the first of December 2013, I would start the Sleekgeek Reboot programme and get the shape and active life I’d never had. It seemed a daunting task, but my mind finally seemed to have found the point where it had had enough of my body and bad habits.”

Totally Inactive
Jacques says for years leading up to that moment, he had spent 90% of his day in front of a computer – he works in IT for the Forschini Group, and was a big fan of gaming – or lying on the couch watching TV. The rest of the time he was sleeping. “Very little physical activity or social interaction took place, I preferred solitude and my make-believe gaming worlds above socialising. And my diet at that stage consisted purely out of take-away meals – all family meal sizes for me alone – plus four litres of fizzy cooldrink a day!”

Overnight he cut out all the junk food and started ordering healthy meals from PaleoMonkey, and on the physical side, he took the proverbial plunge – by heading straight up Lion’s Head for a Sleekgeek group hike. “I threw myself into the deep-end with gusto, dragging my 191.4 kilograms up there, and while I only made it to the first ladder and back, I felt liberated.” The hike was just the start, and the following weekend Jacques did his first parkrun – although he refers to those first attempts at running as park crawls – and he hired a personal trainer to work with him at home, because he was still too embarrassed to be seen in a gym. But by the end of December he had already lost 13.2kg.

In January 2014 he did his first trail runs at the Spur Summer Trail Series and Dirtopia, and says he still remembers how excited he was to earn his first race medals. “I then decided that 2014 would be a year of participation – not competing, but participating, in every damn event I could find. I went for a medical check-up and they found nothing wrong with me, so I had no excuse not to throw myself into everything, and you know, I enjoyed every moment of it. During this whole process the Sleekgeek community were outstanding, as were the runners I began to meet at races! They were the cheerleaders that were missing in my previous attempts to lose weight. Failing was no longer an option, not with so many eyes upon my journey, and by the end of that second month, another 11.9kg had disappeared. I also finally conquered Lions Head on my second attempt.”

Quite the Socialite
Besides losing weight, Jacques began to undergo another big change. Having been totally reclusive for years, he now started to enjoy socialising with fellow athletes. At first it was mostly with fellow Sleekgeeks, but then with more and more other runners as well. “Every aspect of my life just became better, bit by bit. I had more energy, better sleep, more activities, and was meeting more diverse people. I think I may have gone a bit overboard on the Sleekgeek page with constant updates of my journey, but it seems that after years of hiding in the shadows, I had found a place to come out, and yes, I can talk a lot… but if that inspires just one person to do the same, it’s all worth it.”

Today, you will find Jacques lining up for just about every trail run he can find on the calendar, almost always with a camera in his hand, and his Facebook page is full of pics of himself in races, and hanging out with his many Sleekgeek and running friends. At the time of our interview in early August, he had already run 43 races for the year, and it would have been even more if not for an ankle injury in February that put him out of action for a few weeks (and caused him to miss 15 events), and which has recently caused a new niggles.

“I think I unconsciously compensate on the right leg to save the left ankle. Also, before the injury I used to be totally free on downhills – gravity was in my favour, so I didn’t really have a choice, I just had to run! Uphills, not so much… but now I am leaning back more on the downhills, not just going for it, which puts more strain on the leg. And because I just kept running instead of having it looked at immediately, I have been running with this niggle for the last month and a half. But you know us runners… unless we’re on our deathbed, we will ignore injuries. In my case, I think it is because of the gung-ho way I went into running. I’m just going out there to enjoy it.”

High Mileage Junkie
Despite the niggle, he is still clocking up the race mileage, and he says his original target of 100 races for the year is still a possibility, but will be harder now. “Racing is just so much fun. For me there is nothing better than getting out on a Saturday and a Sunday, in a different area or on a different mountain each time. It is just awesome. Keep in mind that I use the term racing very loosely here. I wouldn’t call what I do racing, except on the downhills, but it motivates you to get up, knowing you have a race to go do with awesome people.”

And when it comes to the races he chooses, they are almost always on trail, as he doesn’t enjoy the road runs nearly as much. “To be honest, I find the road boring, and it’s harder on the body, I did a couple of road runs last year and did another three earlier this year, but road running just doesn’t do it for me. Besides, it’s difficult not have fun on the trails, because the trail running community is very supportive, no matter where you run – even when the elites pass you on the way back to the finish and you haven’t reached halfway yet, they still greet you, and tell you well done.”

“I feel absolutely privileged to be part of this amazing community of Sleekgeeks and athletes. If it wasn’t for them, I would probably still be a hermit, playing computer games and living a life of solitude. This community has opened my eyes to the possibilities, and been the gateway to so many other amazing experiences that I would never have had. For example, I would never have dreamt I would do the Impi Challenge obstacle race – even if it was just the 6km ‘Dash,’ I still did it!

Weight Update
So, 21 months after he began his journey back to health, Jacques says he is now 50kg lighter and has lost many centimetres – and he can now buy triple XL T-shirts at Woolies that actually fit! “The weight-loss is going slow lately, but I am patient, because it took me 40 years to get where I was, so I can’t expect it to change overnight!” Besides weight-loss, his other goal is to kick his smoking habit, and he hopes to quit very soon. “Other people carbo-load before a race, I CO2-load,” he jokes. “I am actually cutting back at the moment and have tried to stop a couple of times, but it is tougher to stop smoking than it was to turn my whole life around, eat healthy and start running, to be honest. But I want to finish smoking before I run the Ultra-Trail Cape Town in October, because it does affect the running.”

Jacques is planning to run the 65km distance at the Ultra, which offers 100km and 20km options as well. He ran the short one last year and decided to step it up this year, but says his original target time was perhaps a little bit optimistic. “I planned to do it in 10 hours, until I looked at last year’s results and saw that would be put me in the top 20! So the aim now is just to finish it. That’s pretty much what I have been doing the last year and a half, anyway, just finishing races, and my aim was always just to avoid finishing last. I think that only happened at one race last year, and that’s because the people behind me took a shortcut! I don’t have the speed, but I have the endurance, and I can go and go and go.

Unsurprisingly, Jacques is often asked about his ongoing journey to health and fitness, and whether he has any advice for other people looking to start the same journey. “I always find that question very difficult to answer, because of the way I jumped into things, by just doing it. I tell people to do the same thing and just go for it. Yes, it will be difficult at times, and it is not a straight road, but I say just go out there and do it. And find a community to support you, as I found with the Sleekgeeks and runners. Everybody supports you, they have the same mentality, and it’s easy to do the right thing, eat the right food and do the exercise when you are surrounded by people doing the same thing. But most of all, believe in yourself, take that first step, and don’t worry whether you’ll finish a race, or whether you’ll be last. Just do it… for yourself, for your loved ones, and for a better quality of life.”