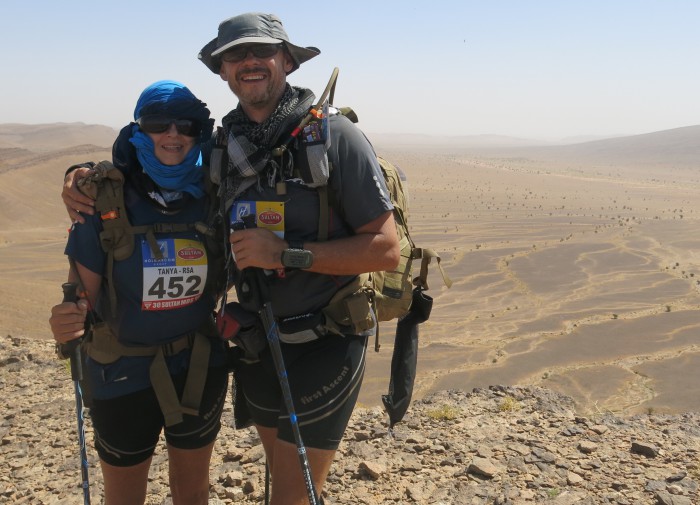 The six-day 250km Marathon des Sables (MdS) in the Sahara Desert of southern Morocco is considered the toughest foot race in the world. Athletes must carry all their food and equipment, the heat can reach 50 degrees, sand gets into everything, blisters are par for the course, and just finishing is a major achievement. This year was the 30th edition, with the largest ever field of 1300 runners, and part of that field was the South African couple, Genis and Tanya Pieterse of Johannesburg, and after reading Genis’ epic five-part race blog, we decided to publish a few extracts here. – EDITED BY SEAN FALCONER

Pre-race: Excitement and Concern
Our journey to the MdS began in May 2014, when Tanya had already completed both Addo Elephant Trail Runs, the 44km in 2013, which we ran together as my final long run for the 2013 MdS, and the longer 76km in 2014. It had been great to see my angel’s progress from not being able to run around the block in mid-2012, but our journey also exposed her fear of heights, and our real concern, her diagnosed Neurological Pain Syndrome (also referred to as Complex Regional Pain Syndrome, or CRPS), which was only discovered after she fell in the 2013 Addo run. CRPS causes prolonged pain, swelling and inflammation, and in Tanya’s case it is triggered by high temperatures, direct sunlight, or placing any load on her neck or shoulders, and I knew that the MdS had all those conditions from 8am until 6pm for seven days in a row! After months of research and numerous discussions with physicians, a medical plan of action was established, which included medication to prevent Tanya’s CRPS from flaring up, and to manage it if it did.

Day 1: 36.2km
We settled into what would become routine for the race, every kilometre I would remind Tanya to drink and to eat, but her difficulty in swallowing, which had started the night before, seemed to persist. Over the next few days this would become a major source of concern, especially when she became nauseous at the end of day one due to the onset of menstruation. Between CP1 and CP2 we had the pleasure of spending some time with Sir Ranulph Fiennes, and seeing that we were from South Africa, he began singing O Die Donkie, an Afrikaans song he knew from when he went to school in South Africa. Everyone was finding the dunes a little difficult and I said, “Don’t worry, everything eventually comes to an end,” to which he replied, “That is not correct, the kindness of a good woman never does.” I will remember those words of wisdom for the rest of my life.

Day 2: 31.1km
This was the day that truly scared me. For the most part, Tanya’s fear of heights was under control, but today was going to be the acid test with three major jebels (mountains) to climb. The distance from the CP2 to the summit of Jebel El Otfal is only 2.1km, but it took nearly two hours to complete the 250m vertical ascent (the equivalent of an 80-story building). Little by little we ascended this massive mountain until we stood on the summit, and there was relief and urgency at the same time. That night eating was again a problem, with Tanya finding it difficult to swallow, and I was concerned when I realised how little she had drunk over two days.

Day 3: 36.7km
Tanya’s lack of hydration and nutritional intake was a real concern, and with having her period at the same time, additional strain would be placed on various vitamins and minerals which would compound the shortfall she already experienced due to CRPS. However, what we didn’t know at the time was that her B12 deficiency could cause hallucinations, vision problems, difficulty swallowing and some digestive problems, while her CRPS medication, under stressful circumstances, could cause difficulty with swallowing, blurred vision, and lower back or side pain combined with hallucinations. So without us knowing it, the stress of the event, Tanya’s health issues and the medicine we hoped would help her, combined to create a disaster of epic proportions, and it was racing our way at full speed.

Day 4/5: 91.7km
My beautiful wife was becoming increasingly concerned with the state of her hair, being convinced that there would be no way to get the knots out, and that cutting it all off would be the only solution. I assured her that once we were back at the hotel, I would wash, condition and blow dry her hear until all the knots were out. Then at about 46km, Tanya said that she can’t see that well, and later that night her vision deteriorated even further and she started to hallucinate, then a sandstorm hit us and she found it hard to keep her balance. At some point she fell, bumping her head, and by now she could see very little, Eventually we reached CP5 at 3am, which meant we had covered 63.3km, and had 17 hours left to cover the remaining 28.4km.

At 5am I helped her put on her shoes as her sight was now almost completely gone, and by 5:30am we were on our way. By 10am at CP6, Tanya was completely blind, very nauseous and had a severe pain in her groin area, so we decided that seeking medical assistance would be the best thing. Tanya was scared that the doctors would pull her from the race if she told them everything that was wrong, so it took some convincing, but eventually she agreed to see the doctors. Within minutes Tanya was hooked up to two units of fluids administered intravenously followed by a unit of glucose, but the pain in her groin became more acute. The medical team decided to administer morphine, and once it kicked in, the relief was obvious. Within 90 minutes of arriving at CP6, we were on our way again. Tanya still could not see, but at least she could swallow again and the pain was manageable. Near the finish it became apparent that news of Tanya had reached the camp, but it wasn’t until we were about 500 metres from the end that it became clear how many people were waiting for her to cross the line.

Day 6: 42.2km
During the early hours of the morning a sandstorm of biblical proportions hit the bivouac and it took me ages to de-sand everything and to get Tanya and myself ready for the day. She was looking much better, and I knew that she would do whatever was needed to get to the end. As we approached the finish, our tent-mates brought us a South African flag so that we could cross the line with it. What a moment! I wiped away some tears which were the result of the overwhelming pride and happiness I felt for my angel, knowing that she had overcome so much just to be there, let alone finish the race.

Post-race: Relaxation and Relief
A very tired Tanya arrived at the hotel and I could see that my angel needed the bath and pampering I had been promising her. I helped her wash and condition her hair and used the hairdryer to dry it while I combed out all the knots, and to much relief for both of us, my angel’s fear of having to cut-off all her hair was soon forgotten…

To read the full story, go to www.push2extreme.com. The next big adventure for Genis and Tanya will be the 6633 Ultra in the Canadian Arctic Circle in March 2017.