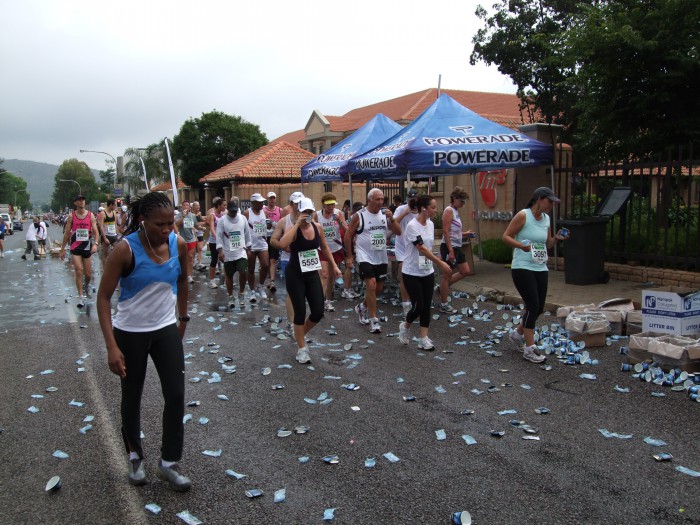 We took our #RunClean campaign to social media and were blown away by the response from runners… but we know this is just the first step in a very long battle to promote a cleaner sport and try to eradicate the litter problem in our races. – COMPILED BY SEAN FALCONER

We Support the Campaign!
Tanya Timms: Ooooh, litter pee's me off something chronic!
Jannie Visser: There are always bins provided, so why not use them? If we can make a small effort, it will make clean-up so much better for others…
Barbara Foot: It annoys me no end – apart from all the other litter in the country that drives me insane!
Linda Doke: Plastic is toxic, and the repercussions of the damage it causes ripple through the food chain.
Peter Swanepoel: The number of times I have seen runners purposely aim to throw a sachet into a drain is beyond ridiculous!
Lisa De Speville: There is absolutely no good reason to litter at road races. Participation in a road race doesn't mean that you have permission to be a litter-bug. Good one, Modern Athlete!

We #RunClean already
Demitri Baroutsos: Only three sides of my ASA number on the front are sewn, so it acts as a pocket. If I can't drop my sachet in a bin, I stick it in there and run with it till the end of the race – it's not like it's heavy or impeding my run in any way.
Rene Mitchell: It doesn't take much effort to carry your empty water bag to the next water point and toss it in their bins… that is what I always do. Just plain lazy tossing it on the road.
Johan Grassman: I simply carry all my rubbish with me in my licence number ‘pocket’ that is sewn onto my running vest.
Wayde Kennedy: Think I'll also commit to picking up at least one or two bits of litter/rubbish at every race I do…

Been there, cleaned that…
Denise Dippenaar: I have helped out at my club run at a water table many times. You will not believe how far we have to walk to retrieve sachets and other items runners have thrown willy-nilly into bushes, etc.
Francis Rogan: I have worked at water tables and I don't mind picking up litter around the table, but very annoying to do it past the water point just because someone couldn't be bothered to hold onto their sachet. I always say, “If you can carry it full then you can carry it empty.”

Lecturing the Litterbugs
Johan Grassman: Spoilt brats. If you want to drink the water, then you are responsible for disposing of your sachet properly. Littering on the road or next to it should never be acceptable, whether you are in a race or not. You want the privilege of waterpoints, then accept the responsibility that comes with it. Stop mollycoddling the litterbugs.
Ruth Cameron: As a technical official I have spoken to people many times. The bags are so light to carry with you. Some runners are just ridiculous!
Glynis Mauldon: While running the Easter 100 with my friends, we spoke to some runners for throwing sachets in the bushes, or down stormwater drains. Nine times out of 10 we were laughed at and told, “Someone will pick it up.” Time to fine runners, because I am sure they don't do this at home.
Janine Nagel: Runners/walkers and cyclists, you found a clean path, so keep it that way please.

Trail Runners (supposedly) do it better
Torrin Theron-Visser: If a trail runner can use a hydration pack or waist belt and not litter, then so can a roadrunner!
Sue-Ann Fourie: Trail runners aren't as innocent as they are made out to be – if they didn't run with their own supply, I guarantee you we'd see a similar problem on the trails. I picked up eight empty energy sachets on Sunday in a trail race… so I'll add the litterbugs to my list of reasons for coming in 11th from dead last.
Alexis Olds: Not all road runners litter and not all trail runners are clean, but I do think it's high time we change the water sachet/littering mentality at races.

Learn from Triathlon
Petro Neethling: Coming from a triathlon background, where we are DQ'd for littering outside of a non-litter zone, it has become second nature to keep the empty water sachet or fuel wrapper in my shirt pocket and only discard at bins provided.
Christelle van Rooyen: I've learnt from Ironman to stash my trash. If you so much as throw away a banana peel and get caught, you get DQed.

The Pessimists…
Andries Kroese: Haha, can't see the front speed freaks cleaning up, but I certainly support the idea. It’s just too messy.
Tiaan Conradie: I just don't get it, why do we need a campaign to remind runners not to litter? How hard is it to either drop your sachet at the water table itself or put it in your pocket until you get to the next table or a bin?
Tracey McKay: This is excellent, but good luck trying to get runners to actually do it! We have a culture now of littering!

Cleaning Crews, Please
Tanya Timms: I think the point of the story is for the runners to be more pro-active in this approach and not give the organisers back-breaking work that is not necessary.
Natelie Kriel: I think runners just assume that the route will be cleared by the organisers/waterpoint stations – that if you are paying to run a race, you would assume that your fees would go towards cleaning. As a fun run organiser, we hire cleaners to walk the route during and after the race, and then re-ride the route to double-check it’s all clear. And by hiring cleaners (at a minimal cost), it really does help job creation, too.
Luzuko Ntissa: As much as I expect race organisers, with the entry fee, to hires cleaners, as runners we must still do our bit.

Useful suggestions
Margi Eksteen: Let runners carry their own water at races… problem solved!
Val Opperman: #RunClean is a great initiative, but if I could just suggest that the dustbins be spaced out a bit more AFTER the tables, not at the table, or like the one marathon I did, BEFORE the tables
At Schoeman: Clubs should announce it at all road races!
Gillian Grobbelaar: I have seen a bin idea that they use up in Johannesburg that had a sail type of backing to it, so the idea was that you throw your rubbish at the sail and it slips into the bin. Was easier to get the rubbish into the bin, and created a novel idea that everybody wanted to try out, and thus less litter.
Armandt Van Den Berg: A bin at each kilometre marker would help loads. A lot of people carry water sachets with them and take a sip on every kay.
Sue-Ann Fourie: Peeps need to take a photo of their empty sachets on their coffee table when they get home.

And think before you throw – #RunClean!