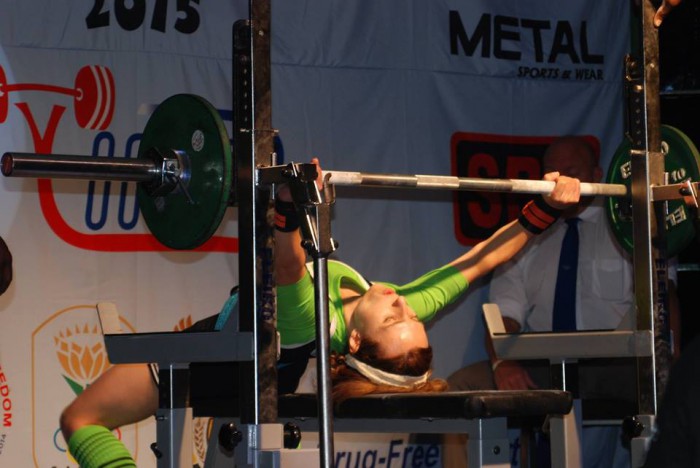 The sport of powerlifting does not enjoy as much publicity in South Africa as many other codes, but thanks to new runner Mariska Casey, more runners will know about it now. – BY SEAN FALCONER

Weightlifting is an Olympic sport and thus many people will have seen the two main disciplines of the sport on TV, the snatch and the clean and jerk. Both involve lifting the weight above one’s head, but classic powerlifting, a non-Olympic discipline at this stage, is all about strength in the squat, bench press and deadlift, picking the weight up with a more controlled movement. And one of the best in the business is chartered accountant and University of Johannesburg lecturer Mariska Casey. (For work purposes, she still practices under her maiden name, McKenzie.)

The diminutive 37-year-old 45-kilogram lifter competes in the 47kg body weight category and is not only the current champion in her weight category, but also holds the SA records for the squat at 95kg, bench of 55kg, and a deadlift of 130kg! She also represented South Africa in June at the Powerlifting World Cup in Finland, where she finished ninth in her weight group – in just her second year in the sport. “I’m not in the top three yet, but quite happy with top 10 so soon after starting. In fact, I thoroughly believe it is a miracle… but my future goal now is to make top five at the World Cup next year, then top three the year after that. My journey has just started, so I am just trying to lift as heavy as I can, and I need to lift often and stay fit, which is where running comes in…”

Mariska recently joined the Modern Athlete Running Club in Central Gauteng and did her first race in late August, having been introduced to running by close friends, Modern Athlete Brand Ambassador Rene Kalmer and her fiancé Andre. “I really enjoy my running and I’m currently running two to three times a week, doing a 5km to the nearby park and back in the mornings. It’s just about fitness at this stage, so my maximum racing distance will be 10km, but I’m hoping to do at least one race per month, because anything less and it will be easy to lose track of my running and become difficult to get back into it.”

Hidden Talent
Mariska says she got into powerlifting thanks to husband, Patrick, taking it up in early 2014. “I saw quite a bit of change in him, especially losing weight, and thought it would be a good idea for me too, so I joined him at the gym in May that year. I started because I have a naturally pear-shaped body, and was getting more so as I got older, so the idea was to lose weight. But my first competition in September was quite an eye-opening experience – I never knew I was so strong until that first competition, and quickly realised that I can do more than most women.” She adds that it is all about strength, not getting big and bulky muscles. “The aim of powerlifting is to be as strong as possible, not to bulk up and look like Arnold Schwartzenneger. In fact, the complete opposite happens with women, who tend to get smaller. My muscles have become more defined instead of bigger.”

As for representing South Africa, Mariska says that is still sinking in. “I call it my ‘little lucky packet,’ a hidden talent I never knew I had, and it is so amazing to represent your country alongside the best in the world. The Chinese and Russians are so strong, so to be up there with them is an honour. Also, the day you get your green and gold jacket is just incredible – even though my jacket is a bit big, as they don’t make Protea jackets in my size. Still, it is an honour to wear it!” She adds that powerlifting is not in the main Olympic fold yet, but the sport has applied for Olympic inclusion and may be added for the 2020 Games, so she really has something to work towards. “And the running will really help my overall fitness if I hope to get to the Olympics some day!”