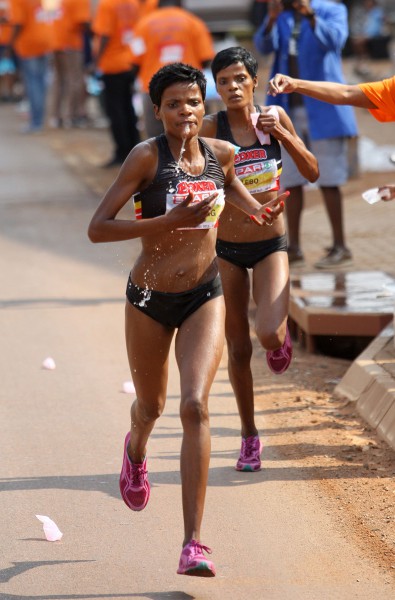 With only one race left in the SPAR Women’s 10 kilometre Challenge series, Lebogang Phalula appears to have all but wrapped up the Grand Prix title.

She has finished in the top three in all four races so far, winning the Durban leg, coming second in Port Elizabeth and third in both Cape Town and Pretoria, and her consistency has earned her a total of 75 points – 14 more than her nearest rival.

Although Phalula could still be beaten, particularly if one of her rivals wins the Johannesburg race on 11 October in record time, she appears the likeliest candidate to take home a substantial cheque for R150 000.

Cornelia Joubert is currently in second position, with 61 points from four top 10 finishes, while 2013 Grand Prix winner Mapaseka Makhanya, who topped the log for the first two races after winning in record time in Cape Town, has bounced back from fifth place to third, on 57 points.

Lebogang’s twin sister, the 2014 Grand Prix winner Diana-Lebo, has moved up from seventh to fourth place, with 54 points, as a result of finishing second in Pretoria.

Christine Kalmer and Nolene Conrad are still neck and neck, although they have dropped from joint third to joint fifth place, on 53 points, while Rene Kalmer, who was lying in second position after the first three races, has dropped down to seventh place after failing to finish the Pretoria race because of a hip injury that has plagued her since the Vienna Marathon in April.

Irvette van Zyl remains in ninth position on the log (30 points), but she opted to run just the five kilometre fun run at the Pretoria race, as she was due to give birth a few weeks later, with her baby son emerging on 8 September.

The Nedbank club, which was ousted from top spot on the club ladder by Boxer last year, is comfortably in the lead with 302 points. Boxer is in second place on 282 points, followed by Transnet (96).