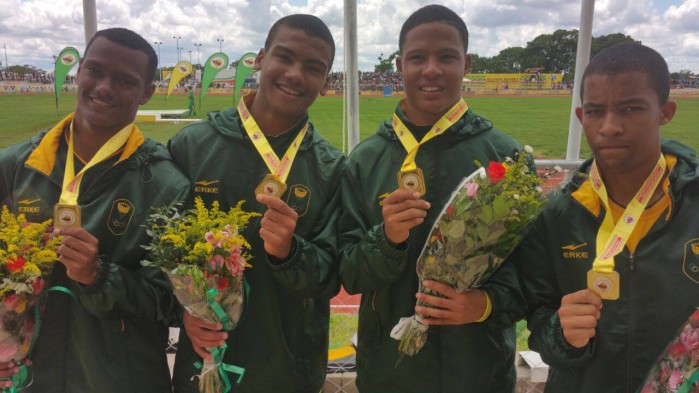 Young sprinter Kyle Appel has already brought home a number of medals and records at youth level, and now big things are predicted for him someday in the senior ranks. – BY SEAN FALCONER

Do a Google search for Kyle Appel and you’ll come across a YouTube video of him in action, with the title: Kyle Appel – Fastest u/15 Boy Alive 2013. In the footage, you see him winning 100m and 200m events at a local meet in Cape Town and finishing a good 20 or 30 metres clear of the rest of the field! Now the title of that video may contain some ‘poetic licence’ – it was posted by a self-confessed fan – but there is no denying that this 17-year-old from Bellville in the Cape is seriously fast!

In fact, Kyle can now claim to be the fastest SA and African 200m youth sprinter of all time, having clocked 20.57 seconds to break Gift Leotlela’s SA record by 0.06 seconds as he claimed the silver medal at the IAAF World Youth Champs in Cali, Columbia in July. (Youth competition is reserved for athletes aged 17 or under.) Earlier in the competition he was unfortunately disqualified from the 100m semi-final round after false-starting, but he made up for that with his second-place finish in the 200m, and in the process climbed to eighth on the all-time word youth list for the event.

This latest medal is a step up after his bronze in the 200m at the All Africa Youth Games in Botswana in May, where he clocked a then PB of 21.07, which in turn followed a gold medal at the Region 5 African Games in Zimbabwe last December, but Kyle says the Cali medal is definitely the highlight. “It was my first World Champs, so it was that much more special. Now I hope to do even better at the Commonwealth Youth Games in Samoa in September, and then the World Junior Champs in Russia next year.” (Junior competition is reserved for athletes aged under 20.)

One for the Future
Unsurprisingly, big things are expected from the grade 11 pupil at Brackenfell High School, who is coached by Marcel Otto and boasts a 100m PB of 10.52 seconds. He is being touted not only as a potential medallist at the World Juniors, but long-term as a senior at the 2022 Commonwealth Games. For now, however, he is just trying to fit in his sport and his academics. “It is tough, because my school work is falling behind from touring a lot, so I’m trying to catch up with my classmates. My friends help me a lot, and the teachers do understand and also try to help.”

Kyle says he also enjoys great support from his family: “My parents have put a lot of time, effort and money into my athletics, and made a lot of sacrifices. They’re my biggest supporters, along with my small brother Cody. He’s only seven, but he trains with me every day, and I think he could be the next rising star.” His other big supporter is girlfriend Alice Adeolu, also an athlete. “She trains with me, helps to motivate me, and is always there to push me.”

Inspired by Success
Naturally, Kyle is excited about the recent spate of records and podium positions by his fellow South African sprinters. “I think SA athletics is going so well. I’ve been watching the local guys and I’m so proud of them, especially Wayde van Niekerk and his sub-20 for 200m. When he was younger he did 100s, so he has the speed to run under 20, and like him, I may move up to the 400m in the future. I raced a few 400s earlier this year, and also ran the anchor leg for our 4x400m relay team at the World Youth Champs, where we came second in the final. We were lying sixth when I took the baton and I pulled us up to second, but I found the distance a bit tiring and I’m not planning to do it again any time soon.”

He says he has not yet made up his mind what he wants to do after school, and will only decide after next year’s SA Champs. “I could turn pro after school, as I have already qualified for the European circuit, and from next year I am planning to run international meetings. My goal is to run a sub-10 for 100m, then move up and focus on 200m and 400m when I reach the senior ranks. And someday I hope to win an Olympic medal, hopefully in 2020, but right now I’m still too young to focus on Rio 2016.”