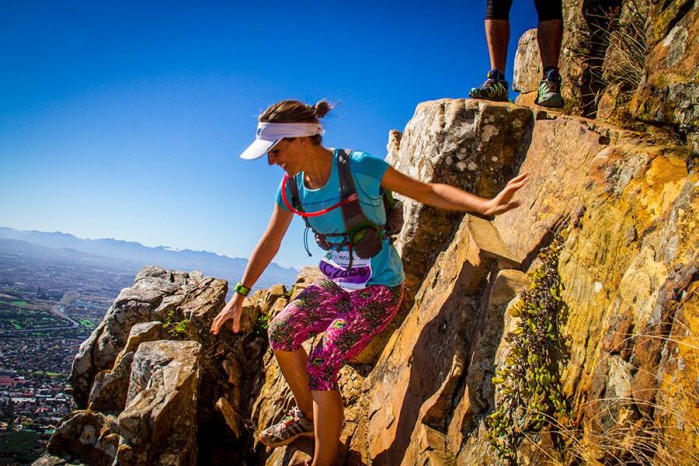 Marine biologist, wife and mother of two, part-time TV presenter… that’s what Eleanor Yeld Hutchings has to juggle, but still she finds time to fit in her other passion, running. – BY SEAN FALCONER

The South African coast is home not only to outstanding natural beauty and unparalleled diversity of marine fauna and flora, but also to fascinating people, and that is why the SABC commissioned the TV programme Shoreline in 2008 – and that is how Eleanor Yeld Hutchings came to be on TV. “I was busy with my PhD and working for a marine tourism company when Homebrew Films called me, said they were looking for expert presenters for the series and I had been recommended, so would I do a screen test? I thought about it for all of a split second, did the test and got the job. The filming took about nine months and we had one film crew of five to cover the four presenters, so we each filmed separately for one week out of five, which meant I could be at home for the remaining four weeks to go to work, finish my PhD and graduate, get married, fall pregnant and have a normal life.”

The show proved very popular with viewers, leading to several awards and then a second series being filmed in 2012, which also led to Eleanor being noticed by the makers of National Geographic Wild, who brought her on board to do expert commentary on their Caught in the Act segment. There is now talk of a third series of Shoreline, which greatly excites Eleanor, because she says it was fascinating work, even if not as glamorous as people think.

“There was no hair and make-up, because we wanted a real feel, and our living arrangements depended on where we were, like on Malgas Island: Nobody lives there except a lot of gannets, and the only structures are a couple of wrecked old buildings, so we had to bunk down in sleeping bags on the floor. But that was fine, because the amazing part was travelling around the coast twice and getting to places that the average tourist cannot go. And getting to meet other scientists and learn about their research and work was such a privilege.” Also, being a keen runner, Eleanor made sure to keep up her running while on location, often running with cameraman Chis Lodz. “We had some hairy runs, though, like the one where we went past signs that said beware of hippos. It became an interval session every time we heard a noise in the bushes!”

Marine Focus
A resident of Cape Town all her life, Eleanor (34) is married to Ken and mother to two kids, Daniel (5) and step-daughter Erin (8). Having also previously worked for WWF South Africa, she is currently working for the Save Our Seas Foundation in Kalk Bay, where she manages the Shark Education Centre. “A lot of people have the wrong idea about sharks and don’t understand the role they play in the marine environment. They only hear negative news about sharks, so putting sharks in perspective is what we do, and showing people how important the seas are, that we depend on the oceans not only for our weather, but for the air we breathe.”

Eleanor’s career path was largely influenced by her father, John Yeld, who recently retired after spending his entire career with the Cape Argus newspaper as its award-winning science and environment photo-journalist. His love of running also helped her get into the sport. “He is my running inspiration and we often do races together,’ she says. “He did eight Two Oceans ultras and a Comrades, as well as the Puffer, Three Peaks Challenge and Bat Run, plus heaps of Oceans Halves and Trail Runs, and is still running at 66.”

However, Eleanor admits that she was not a fan of running when younger. “I loved sport, but I was a swimmer and water polo player, and absolutely detested running. Then I hit university and couldn’t afford a gym membership, so I needed something to keep fit and healthy, and running was cheapest and most convenient. I started by tackling a ‘Couch to 21km’ programme with two friends ahead of the 2004 Two Oceans Half, and somewhere along the line I went from hating it, to hating it but enjoying post-run feeling, to realising I actually enjoyed running. And then that feeling of finishing the race with my Dad and friends really got me hooked, even though I couldn’t walk the rest of the week!”

Fitting in running
Eleanor has to fit her running in around her day job, family life and part-time filming, but she says she makes it work. “I actually schedule regular runs on my calendar and consider them appointments. In summer I get up early before work to run, and in winter I usually run after work with a headlamp and lots of reflective gear. That’s the beauty of running – I can do it anywhere, any time, whether I have 20 minutes or two hours. And if I am really pressed for time, I just find hilly terrain or run faster.” She adds that Ken is very supportive of her running. “He is also very active and has his own sporting interests, including surfing and mountain biking, so we make sure we get a good balance. He shoulders a fully equal share of all domestic duties, including cooking and cleaning, and that’s probably the most important part of making it work, that we both respect each other’s sport, and give each other time and space.”

Today Eleanor runs between 10 and 20 races a year, mostly on road in her Fish Hoek AC colours, but she also does trail races when she can. “I’m not the world’s fastest runner, but this year I’ve done my fastest times for 10, 15 and 21km, despite being a working mom. I’m really kicking my 20-something’s butt!” Her longest race was the Two Oceans ultra last year, where she finished in 6:40. “It was something I had always wanted to do, and even though it was hard and I was cramping towards the end, I was never in doubt about finishing. I want to run it again next year and finish in sub-six hours, and later I would like to run Comrades, but only after I turn 40. All the runners in my family say it is better to be older, plus I want the kids to be older before I give that much time to my training.”

Almost Famous…
Naturally, being a TV presenter means that Eleanor gets recognised, but she jokes that Shoreline certainly has not turned her into a celebrity. “I get people saying I look familiar, but they can’t quite remember from where, and usually the only place I get recognised is by retired folk in grocery stores, and during trail runs. My dad thinks that is hilarious… during races he says ‘OK, we’ve been running for 20 kilometres, you’re sweaty and your hair is messed up, so I’m sure somebody will recognise you soon.’”