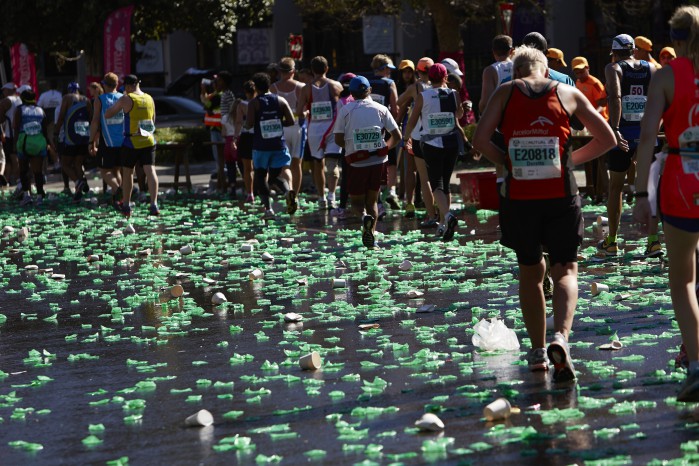 We’re calling on all runners to join our #RunClean campaign, because we feel very strongly about the litter problem in road running. It’s time to clean up our running act!

Here at Modern Athlete we have made it our mission to promote a cleaner sport and try to eradicate the litter problem in our races, by launching the Modern Athlete #RunClean campaign and continually reminding runners to think before they throw. Because we believe that every piece of plastic not dumped on the road is a step in the right direction, which will not only lead to less litter, but in the long run to less waste being produced by our sport.

What you can do to #RunClean
• Carry your own water in a hydration backpack or water bottle belt, so that you don’t need to use the sachets. (Some runners say it weighs them down, and thus slows them down, but trail runners seem able to run quite comfortably and quickly while carrying water, so surely road runners can also do so.)
• Don’t drop your sachets (or other refuse) in the road – always look for a bin, or carry your rubbish till you can throw it away, even if that is at the finish. It really won’t weigh you down that much, or cost you that much time to move a few metres towards a bin!
• Wear running kit with a pocket or pouch (or make one with your licence number) so you can carry rubbish to the next bin or the finish.
• If you do drop a sachet in the road, do so within easy distance of the water tables, in demarcated litter areas, not three kays up the road, so that the clean-up crew can quickly, easily and safely clean up.
• Never toss a sachet where it cannot be seen by the clean-up crew.
• On windy days, make doubly sure your litter is well disposed of in bins or rubbish bags.
• If you see fellow runners littering, try to diplomatically suggest a cleaner attitude going forwards, but avoid getting into an argument or confrontation.
• Make a point of being a cleaner runner by promoting a no littering rule, not only in your own behaviour, but also in your social media comments and interaction with fellow runners. Include #RunClean in your Tweets and Facebook posts.
• Volunteer to help clean up at a water table at an upcoming race. That should make you think twice about tossing your sachet next time…


We would love to hear from you about your efforts to #RunClean, so send your letters, photographs or ideas to letters@modernathlete.co.za.