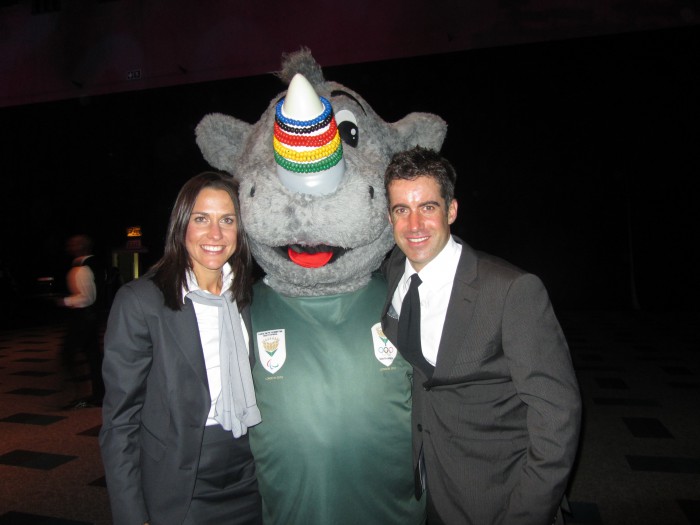 What is better than a PB, a qualifying time or winning a race? Getting asked to spend the rest of your life with your best friend… who is also a runner. A month ago this dream came true when André asked me to marry him. Whilst the romantic how and where will remain my secret, I have to admit that I was wearing my Adidas tracksuit and a stopwatch at the time… – BY RENE KALMER

Andre and I have been friends for almost 30 years, because his sister, also Rene, and I have been best friends since nursery school. We were always known as Rene 1 and Rene 2. Little did we know that years later she will not only be one of my bridesmaids, but also my groom's sister…

In 2012 I asked Andre to be my date for the Olympic Banquet before Team SA departed for London. The next day Andre booked a ticket to London to come and support me, and as they say, the rest is history. Even though Andre and I share the same love and passion for running, he often jokes that it is actually two different sports we participate in. Andre would ask me how I can run a marathon in 2 hours 30 minutes? I would reply: “How can you take 2 hours 30 minutes to finish a half marathon?” Andre would ask: “How can you train 180 kilometres in a week?” I would ask: “How can you only run 180 kilometres in a month?”

Different Strokes
No need to point out that I’m extremely competitive, while he would rather run an hour slower on a race just to have company, or to help a friend qualify for Comrades. When we started dating, I thought I would have a positive/faster effect on his running, but he proved me wrong by clocking his slowest time in the Comrades that year, 11:58. While I race at the front of the pack, Andre is usually in his own race trying to finish just before the cut-off gun, and hearing his stories from the back of the pack often leaves me speechless. He prefers running in the bus with the cymbal, while it drives me mad if someone is running near me with change in their pocket. Although I can't imagine all these things during a race, I can see the fun he has in doing the same, but oh so different sport…

However, we both have running as an integral part of our lives, and I think therein lies the secret. We both get up early to get to races. We both have our rituals the evening before a big race. We both understand the challenges, the commitment and also the emotional support needed when a race doesn't go according to plan, or when injuries take their toll. I’m also really grateful for him supporting my lifestyle as a professional runner. He understands the time and effort needed to succeed. The commitments to sponsors and fans, the press conferences and appearances, the prize-givings and doping tests, the agony and the ecstasy. Holidays, weekends and even weddings are planned around my races. Early mornings to get up training and going to bed earlier because of a hard session the next morning are all part of the game. He never asks if I “really have to go and train,” but instead he drives for hours behind me, seconding me or playing photographer on my long runs.

He doesn't care if I finish first or clock a fast time in a race. What matters most to him is that I enjoy it. I also appreciate the fact that he was willing to sacrifice a December holiday at the beach to join me for altitude training at Afriski in Lesotho. We have also had some amazing ‘running experiences’ together, notably the London Olympics and Berlin Marathon, and having him in Boston with me when the bomb exploded was of course very comforting.

Best Friends
A runner is a special type of person. We enjoy a healthy lifestyle. We are committed. We understand a blister on a foot or a lost toenail. We fight, we conquer, we struggle and we both know about ‘vasbyt’… but between all the blood, sweat and tears lies the most beautiful friendship. I have found my runner… Have you found yours?