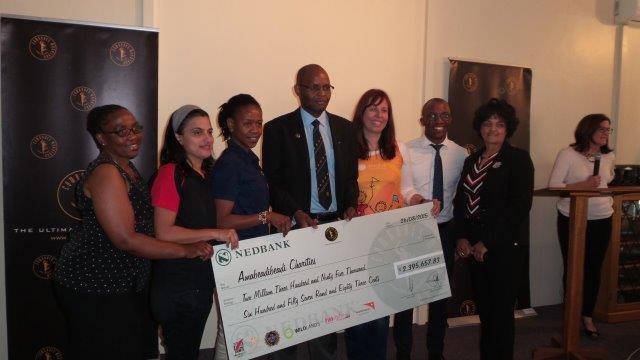 The Comrades Marathon Association (CMA) officially handed over more than R4.66 million to its six official charities on Wednesday 26 August. These funds were raised from its 2015 Comrades Marathon Amabeadibeadi and Race4charity fundraising campaigns, which saw new heights being reached in 2015 as the campaign topped out at a total of R4,660,340 raised collectively by Comrades runners and the charities themselves.

A total of 338 runners signed up to support Race4Charity and between them they raised an incredible R2,357,593, which is an amazing 77% increase from 2014. Of these runners, 261 raised more than R5000 and qualified to start in the special ‘CC’ batch on race day. The Top Donor was Carel Nolte, who raised R153,800 for the PinkDrive.

Runners were also extremely generous with donations with their entry fees, raising R479,760, which is a 48% increase on the total raised in 2014.

All in all, charity donations and runner donations saw a combined increase of R1.18 million compared to the figure raised by runners in 2014.

CMA Chairperson, Macdonald Chitja says, “We thank every runner who so selflessly worked towards the benefit of our charities. Training for the ultra-marathon is hard enough, let alone to go out there and drum up support for our fundraising initiatives. We are very grateful to you.”

The six charities that benefit from the CMA’s charity drive are the Durban & Pietermaritzburg Community Chests, PinkDrive, Sports Trust, Starfish, Wildlands and World Vision. The Comrades Charity Drive was started in 1999 as a means to give back to South Africa’s needy and improve the social and environmental landscape, and more than R20-million has been raised over the past 10 years.

CMA Board Member, Alen Hattingh says, “As the Comrades Marathon, we pride ourselves on doing more for our charity drive as well as for the local community via our CSI Programme. The CMA has undertaken several projects in this regard, namely the annual Greater Edendale Race incorporating the AIMS Children’s Series Race, the KZNA Relay Challenge, the Underprivileged Runners Programme, building an outdoor gym in Pietermaritzburg as well as committing to our Staff’s CSI initiatives. It is deeply fulfilling to be involved in any such way to engage with and empower our communities.”

CMA Vice Chairperson, Cheryl Winn adds, “It is the CMA’s intention that we maximise our fundraising role through the Comrades-Amabeadibeadi charity initiative. We are proud of our status as the South African sporting event which contributes more than any other to charity. We warmly welcome the support and contributions of all Comrades runners, our sponsors and partners; and the nation at large.”