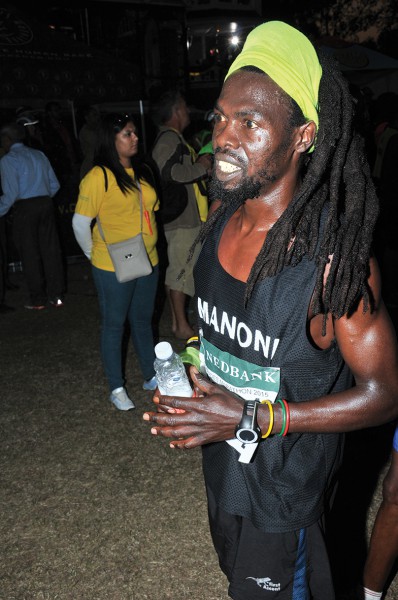 Running the Comrades forwards is hard enough as it is for most runners, so just imagine how much harder it must be to run it backwards! But that is what Farai Sinomwe did this year, and it should go down as one of the most incredible Comrades runs of all time… and he did it to raise awareness of the plight of bees, because they are so important to all of us. – BY SEAN FALCONER

Just before the Old Mutual Two Oceans Marathon earlier this year, Farai Sinomwe of the Manoni Running Club in Johannesburg contacted the organisers in Cape Town to ask if he would be allowed to run the race backwards. Not the route in reverse, take note, but actually facing the wrong way. The reaction he got was “I never heard of such a thing. Why would anyone want to?” In fact, every time the Rastafarian beekeeper enters a race, he soon finds himself listening to all the usual jokes: “Most of the time I get ‘You’re going the wrong way,’ but I also get asked what I’ve been smoking! Still, people are supportive, and that helps to keep me going.”

With Oceans behind him – if you’ll excuse the pun – and having also run backwards in the Old Mutual Om Die Dam 50km ultra, Farai next set his sights on the Comrades, and finished in 11:41:31. Along the way he received an incredible reaction, from spectators and fellow runners alike. As Modern Athlete’s graphic designer Caroline Collings explains, “I had a wonderful chat with him when I caught up to him, since he was facing me the whole time, but it had taken me till past halfway just to catch him! What he did was just incredible.”

Inspired to go Back
It all started a few months ago when Farai was called out to collect a swarm of bees and was driving home in the early hours when his car broke down. “It was one o'clock in the morning and I was driving on a very dark Corlett Drive on the outskirts of Alexandra in my battered old Peugeot, with the bees buzzing angrily in the boot, when the car simply died. I realised I'd have to push the car to the top of the hill before I could coast the few kilometres back home, but I soon realised I wouldn’t make it pushing the car the normal way. So, I turned around, with my back to the boot, and found it far easier.”

Two hours later Farai made it home, transferred the bees to their new home and finally got to bed, but the next day he noticed something when he got out of bed. “My quads felt like they got the most amazing workout, and I realised that the bees had helped me discover a really useful training technique, so I decided to add some backwards running to my training.” That saw Farai enter a few 10km races as a backwards runner, and then he stepped up to 21km at the Pick n Pay Half Marathon. “I ran a 2:10 and had many people asking me questions, and that got me thinking about doing it for a good cause, so I decided that since I am a beekeeper, and the bees are in trouble right now, I would run backwards for the bees.”

All around the world, bee populations are in decline, due to a combination of insecticides, loss of habitat, disease and global warming, and this in turn threatens the very food sources that humans rely on. Nearly 85 percent of the world’s flowering plants depend upon pollinators like bees to reproduce, and this includes more than two-thirds of the world’s crop species of fruits, seeds and livestock feed. The bees are thus vital to the food chain, and people like Farai are helping to bring much-needed attention to their plight. “I decided to run races backwards to raise awareness about the importance of bees in the environment, and all funds I raise will be used to establish and manage new hives, as well as for creating training opportunities and jobs for new beekeepers, through my business, Blessed Bee Africa, which does bee removals and relocating in the city.”

Big C Backwards
So, with a backwards half marathon ticked off and a new cause to run for, the dreadlocked runner next moved on to the marathon mark at the Township Marathon, clocking in at 4:35, and then he ran the Om Die Dam 50km in 6:15 and Oceans in 6:10. Next he decided to run the Comrades backwards as well… Now, keep in mind that Farai already had four Comrades medals, with two 11-hour finishes in 2010 and 2011, but then came a Bill Rowan 8:03:20 in 2013 and a 7:06:26 finish last year for a silver medal, so this man can really run! Forwards, that is… but he gave up on another fast time to run for the bees this year.

“Physically it was a bit tough and my quads were burning at the end. Also, at some points there were too many people next to the road, so I had to turn around to see where I was going, because I was bumping into people, but soon as the road was clear again I turned around again. I was so impressed with the running community and spectators, for all their support, because it made me feel like I was doing something good. Even now, weeks after the race, I hear people asking about the backwards runner, whether I made it, and I want to thank them for all their support. I will be back for more backwards races, so people must look out for me and say hello.”

You can support Farai’s efforts to save the bees at Blessed Bee Africa on Facebook, or call him on 084 662 8761. He says he really needs help with transportation and building materials for hives, so any assistance will be much appreciated.

Sidenote #1: Benefits of Backwards
Various studies have shown that backward running can be hugely beneficial to athletes, including helping you maintain a more upright posture, improving balance, and lessening the impact on your knees due to a softer footfall. A study at Stellenbosch University even found that backwards running can burn more calories! Added to that, it promotes a better relationship between your muscles and helps them deliver more power, safely, say the experts.

However, developing the right technique is vital to avoid injury or accident. First, find a safe training venue, such as a park, beach or athletics track. Then it’s shoulders over your feet, arms held low and close to the body, and push off from the balls of your feet, trying not to lift them too high off the ground. Oh, and remember to look over your shoulder. Or better yet, take a training partner along to act as your guide, and if you both want to run backwards, take it in turns to be the guide.

Sidenote #2: Backwards Records
There is actually a recognised sport called Retrorunning or Reverse Running, and world records have been recorded from the 100m sprint all the way up to the marathon. At present the fastest time for the men’s backwards 100m is 13.6 seconds, run by German Roland Wegner in 2007. At the same meet in Horgau, German Isabella Wagner set the women’s record at 16.8s. The men’s marathon record of 3:42:41 was set by Germany’s Achim Aretz in 2010, while Kerstin Metzler-Mennenga of Liechtenstein holds the women’s marathon record thanks to her 4:42:39 effort in Rome in 2008.

There are also recorded ultra distance runs, such as Plennie L. Wingo of the USA walking 13,000km backwards from Santa Monica in California to Istanbul in Turkey in 1931-1932. In slightly more recent times, Arvind Landya of India set the Trans-USA record for walking 5100km backwards from Los Angeles to New York in 107 days from August to December 1984. So Farai’s run from Durban to Pietermaritzburg is nowhere near being the longest backwards run ever recorded, but it is the first recorded Backwards Comrades, and he is thus in the record books.