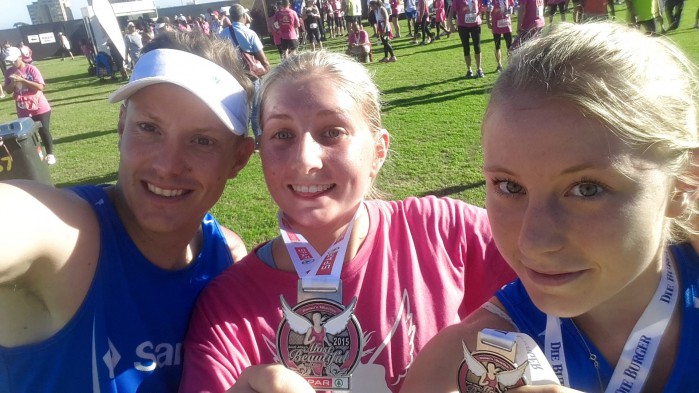 It began with “Luisa, we have great news for you,” the mail that informed me about my gap year placement in South Africa. So in August 2014 I came to Durbanville in the Cape and started to volunteer in a children’s home, and from the first day I enjoyed the time with the kids, but after a while I was looking for a physical challenge… – BY LOUISA ORTH

I missed the feeling of being absolutely exhausted after a rugby match or boxing session back in Germany. So I registered in the nearby gym, where I could be found on the treadmill. Starting with 2km, I was able to run 10km non-stop after two months, but after four months my improvement slowed down. I needed a goal to keep me motivated. That was when I met Jacques. He used to run the previous year, but lost it somehow, so we decided to meet for a short 5km run through town. We have run every week since, and then registered for parkrun, and eventually decided to train for a race, “just to try it out.” And so in November I finished the Edgemead 10km in a time of 57 minutes.

Hooked for life
From there my addiction grew. Just a few days after my first race I signed up for the Sanlam running club, and every weekend we are now participating in at least one race. Trail runs, road runs, orienteering… I tried everything, and half of my life is now about carbo-loading, speed training, magnesium and mindsets. It’s not just about finishing a race any more, because I am heading towards sub-44 for 10 kays, and in the 15km I have improved from 79 minutes in my first race to winning my age category prize in 71 minutes!

Now I am sure there was a reason why I got the project place in South Africa: To find my passion for running! It fulfils me incredibly to reach a goal that I have trained for, and to be part of a running community that shares the same ‘addiction’ is simply breathtaking. So even if I have to leave South Africa soon – with more running equipment and medals than anything else – I will never stop running!