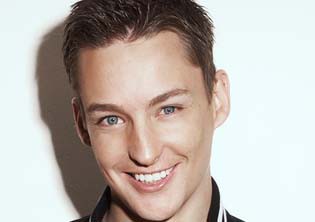 947 radio presenter Alex Caige was ready to take on his first Comrades Marathon this year, until a stress fracture put him out of action, but with a positive outlook on his recovery process, he’s ready to conquer more fitness goals. And Comrades 2016 is on the cards! – BY LAUREN VAN DER VYVER

MA: You’re big on the 947 cycle races, but when did Comrades become a pursuit you wanted to tick off?
Alex: My old man was doing Comrades back in 2012 and wanted me to try it. I’ve done cycle races with him, like the 947 road and mountain bike challenge as well as the Argus Cycle Tour, and it’s great having him with me, because it’s a distraction and motivation with the endurance stuff. Instead of joining him for Comrades then, I was doing the Fish River Canyon hike, so I outlined my first Comrades to be the 90th one. So in the middle of last year, I was getting my mindset right, because it’s an important part of the training journey.

MA: And then your stress fracture happened…
Alex: It happened when I picked up the distances in January, and I discovered it at my first marathon at Jackie Gibson. It was my qualifier, even though I knew it was notoriously tough, but beforehand, my friend I was training with kept forgetting to send me the route profile, so I thought, “How bad could it be?” Four and a half hours later I crossed the line, and that’s where I picked up the stress fracture in my leg. My muscles were fine, but I told my physio I felt a sharp pain inside my leg and she confirmed it. I got told that it would take between four and eight weeks to heal, but either way, my fitness would take a knock. I didn’t want to get to 54km at Comrades and then give in, and possibly with a long-term injury as well.

MA: You have to juggle radio with playing MC and being at events. Have you found a schedule to fit in training?
Alex: It’s difficult to balance everything. Sometimes I finish gigs at 2am, having to be up again at 4:30am. The hardest thing about Comrades is the commitment before the race, where you have to wake up early. It does become part of your routine, though, and it freshens you for the day – you appreciate it when you see this massive sunrise with streaks of gold. Time is a psychological thing. If you tell yourself it is or isn’t going to happen, that’s what it is going to be.

MA: Have you learnt to become mentally tough in the last stretches of an event?
Alex: It’s psychological. When you hit 65km at the 947 for example, you have to push through. You have to count down. I say to myself, “It’s just a training ride away,” and I map out my weekly rides into the race and that pulls me through. At Jackie Gibson, with 10km to go, I thought about my training runs during the week. I thought, “Oh, it’s a normal Tuesday night and I have to get this done.” You forget about that pain. My old man always tells me to stay positive and my mentality for training is what I bring to work. You have to believe for it to be a reality.

MA: Are you recovering well?
Alex: I went back to gym a few weeks ago to begin swimming and walking in the pool. I want to get my strength back. If you think about it, a fracture is technically a break – not a compound break, but it hurts! I will only try running again in July, starting with 3km to see how I feel. Then I want to build up slowly.

MA: Then is it back to the Comrades drawing board?
Alex: Cape Town Marathon is on the cards and I hope to build up my fitness before that. I will also be training intensely for the Cycle Challenge. Getting back into it, Comrades is obviously there. It’s the Ultimate Human Race. People think I’m crazy and say I should rather do Loskop, but I’m set. I’m a little worried about the Down Run, because of the impact Jackie Gibson had, but I have the mindset that I will do it. It’s about the vibe and challenge. Everyone should try it at least once.