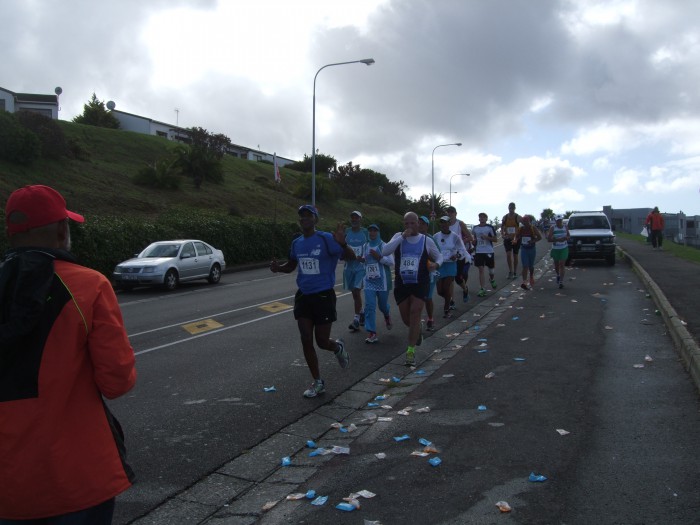 Here at Modern Athlete, we feel very strongly about the litter problem in road running, so we’re launching a new campaign to do something about the problem! It’s time to clean up our running act and #RunClean! – BY SEAN FALCONER

I want to take you back to 1995, my first year in road running, when I volunteered to do water table duty for my club in our Spookhill 15km race in Somerset West. I dutifully stood there handing out sachets of water near the 3km mark, cheering the runners on and having a pretty good time. But then the clean-up started. Four of us had to walk the next 3km stretch of steep uphill, picking up thousands of plastic sachets that had been strewn all over the road, the pavements, in flower beds, on people’s lawns, under cars on driveways, in drains, all while dodging cars on a busy road. It was back-breaking work, not to mention dangerous, and a downright unpleasant task.

From that day on I vowed to always try throw my used sachets in a rubbish bin, or carry them to the next water table, or stuff them in a pocket and throw them away later, so that other people would not have to clean up after me. I also followed the example of some clubmates at the beginning of 1996 and sewed my front licence number on with the top edge loose, to form a pocket, which I used for empty water sachets. But all around me, many runners just continued on their merry, messy way.

Think before you throw
A few months later, in the Michells Pass Half Marathon on the mountain pass leading up to the picturesque town of Ceres, I was running alongside a guy who took a water sachet, drank about half of it, then launched it as far as he could over the edge of the pass into the nature reserve far below. I couldn’t help myself but say something, as I was taught from a young age not to litter, so I tried diplomatically to tell him that none of the water table volunteers would be able to clean up that sachet all the way down there in the kloof… Let’s just say that his answer is unprintable here and leave it at that.

Other races over the years also stand out in my memory, for messy reasons. One half marathon went through the Waterfront and harbour areas of Cape Town on one of those horribly windy days in the Mother City, and it was terrible watching all those little blue plastic sachets flying all over the place. Even worse, I recall running the Cape Point Half Marathon, another race within a nature reserve, also on a very windy day, and once again, bits of plastic disappearing into the Fynbos, and runners tossing their sachets a few metres off the edge of the road, where the volunteers were unlikely to see them and pick them up.

Still a problem…
Fast forward to 2015, my 21st year as a runner, and I am still seeing the same thing happen week after week. I have always enjoyed this sport, being surrounded by fit and healthy people with a can-do attitude and lust for life, but I hate the mess that we runners often leave behind on the road. What really gets to me is that some runners have an attitude that somebody is there to clean up after them, even getting paid to do it, so that makes it OK to litter and run. Sorry, folks, I happen to disagree.

Firstly, many of the volunteers at water tables are members of a company, organisation or school that has agreed to man a water table, so they are often unpaid volunteers, out there to support you while having some fun, not clean up after you. I have been there and seen their faces when they realise the race has passed by and the fun is over, but now the unpleasant clean-up must be done. Sometimes they are still at it hours after you’ve finished running.

If there is a paid clean-up crew, then it is because the race organisers know that the runners will leave so much mess behind that they need to budget for this crew to go to work once the littering masses have passed through. Now in this day and age of tight budgets and dwindling sponsorships, it is an expense that many races would happily cut if they could – and they could do so if runners were not so messy.

Time for change!
I believe that it is only a matter of time before some of our favourite races get cancelled due to the mess left behind by the runners. Sooner or later some municipal or nature reserve manager is going to write to an organising club and say, thanks but no thanks, we don’t want your event coming through our town or reserve again, as the mess left behind last year was unacceptable. So, here at Modern Athlete we have decided to make it our mission to promote a cleaner sport and try to eradicate the litter problem in our races, by launching the Modern Athlete #RunClean campaign.

In the coming months we are going to promote it vigorously and keep reminding runners to think before they throw, so we will run articles on the campaign, ask race organisers to support the drive, get race announcers to promote it before and after races, and put the spotlight on runners who have decided to #RunClean. Because we believe that every piece of plastic not dumped on the road is a step in the right direction, which will not only lead to less litter, but in the long run to less waste being produced by our sport. As they say, watch this space…

What you can do to #RunClean
• Carry your own water in a hydration pack or water bottle belt, so that you don’t need to use the sachets. (Some runners say it weighs them down, and thus slows them down, but trail runners seem able to run quite comfortably and quickly while carrying water, so surely road runners can also do so.)
• Don’t drop your sachets, supplement wrappers or other refuse in the road – always look for a bin, or carry your rubbish till you can throw it away, even if that is at the finish. It really won’t weigh you down that much, or cost you that much time to move a few meters to one side towards a bin!
• Wear running kit with a pocket or pouch (or make one with your licence number) so you can carry rubbish to the next bin or the finish.
• If you do drop a sachet in the road, do so within easy distance of the water tables, in demarcated litter areas, not three kays up the road, so that the clean-up crew can quickly, easily and safely clean up.
• Never toss a sachet where it cannot be seen by the clean-up crew.
• On windy days, make doubly sure your litter is well disposed of in bins or rubbish bags.
• If you see fellow runners littering, try to diplomatically suggest a cleaner attitude going forward, but avoid getting into an argument or confrontation.
• Make a point of being a cleaner runner by promoting a no littering rule, not only in your own behaviour, but also in your social media comments and interaction with fellow runners. Include #RunClean in your Tweets and Facebook posts.
• Volunteer to help clean up at a water table at an upcoming race. That should make you think twice about tossing your sachet next time…