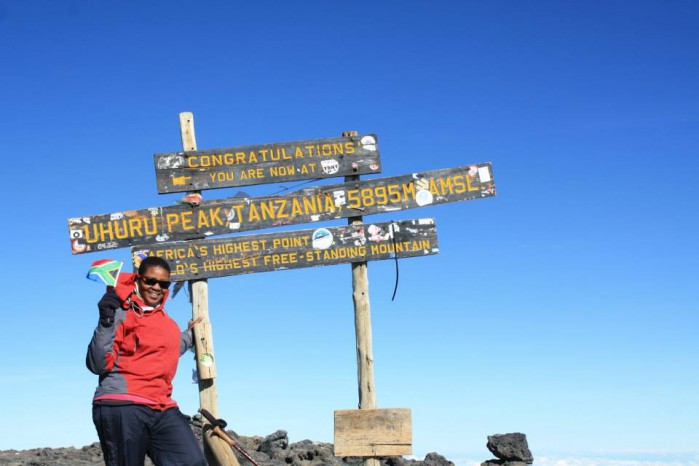 As an asthmatic, challenging to tackle the world’s big seven summits is quite a feat in itself, but for Katlego Letheo, her dream entails overcoming more than that. She chats to Modern Athlete about training for the big peaks, and being on Everest when Nepal’s earthquake struck. – BY LAUREN VAN DER VYVER

MA: You’ve set yourself one calendar year to climb all the summits – what made you take this on?
Katlego: When I was living in Cape Town, I met a Russian girl who invited me on an evening hike, but I didn’t make it. It wasn’t an asthma issue, it was a fitness issue, so my mindset shifted. I started walking and swimming, and weeks later I got to the top of Lion’s Head, and decided that I wanted to climb Kilimanjaro. On that journey, I found out about the Seven Summits Challenge, the Grand Slam of mountaineering to climb the highest peak on each continent. (See below– Ed.) I never thought of myself as an athlete growing up, but after finding mountains, I have learnt a sport where I can pace myself. It’s you and the mountain, and you have to manage yourself at high altitude. I figured I could be more than the book-smart chubby girl with asthma.

MA: You were close to the peak of Everest itself. Then the earthquake in Nepal happened…
Katlego: Everest was always something to think about, because it claims lives. We were on the mountain for two weeks and returned from intermediate basecamp at 5800m and I remember being in my tent when everything started to shake. We were worried about the climbers further up and with some stability problems on our side after the aftershocks, we had to wait for instructions. We struggled to reconcile with the decision not to continue, because you dedicate so much to the climb, but it was also a vote for the people of Nepal who suffered so much.

MA: Dealing with any climb must take a lot of mental strength.
Katlego: Sport gives you that confidence and toughness. I took a year off my job as an IT auditor to do this challenge. I have been training at the Wanderers with Jeff Lunsky, who is a fitness coach with the Highveld Lions, and it’s the best challenge to train alongside pro cricketers. He also helps train the country’s top female squash player, Cheyna Tucker, so being able to do time trials with her is a nice challenge. Monday to Thursday I’m with Jeff doing high intensity intervals with strength, to simple cardio. From Friday to Sunday, I am either in the Drakensburg or the Cape to do big hikes. For the last while, I’ve been doing a lot of tyre pulling, because when I take on Mount McKinley in Alaska, we have to pull our own sleds with supplies. Then it’s on to Mount Elbrus in Russia, where I had to turn back before.

MA: Do you ever have a bad moment when you think about backing out?
Katlego: A climber always has that insecurity and it’s difficult to always have your game face on. But in the case of Everest, it was the first time I was being sponsored by the National Lottery Distribution Fund, so there was a responsibility even though it didn’t work out. Above a certain altitude, you’re pleading with the elements to be able to continue. You have short breath, everything swells, you have acid reflux. But with so much support from friends, family and Jeff, it makes it easier.

MA: You’re also giving back to children who are inspired to conquer mountains, too.
Katlego: I’m working with schools and teaching kids how to hike and rock climb, and they love it! I am also going to identify five kids who will go to Kilimanjaro with me in October. All they need is to be aware of the sport. I hope that I can take this development further after summiting all of the seven. There are a lot more adventures for me after that.