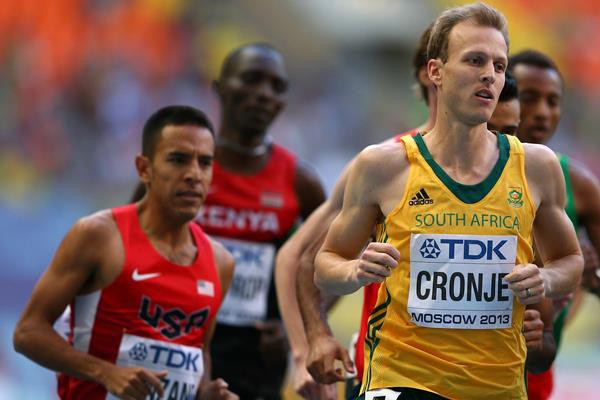 Olympian, World Champs bronze medallist and South African record holder in the 1500m Johan Cronje has mastered his discipline for well over a decade, but he’s now working even harder on his speed as he chases glory on the world stage. – BY LAUREN VAN DER VYVER

Back in 2004, at the Athens Olympics, Johan Cronje admits he was still content to play second fiddle to the big names on the track in the 1500m, and even considered himself a spectator, just trying to absorb as much experience as possible. “I still remember the 2004 Olympics in Athens, the birthplace of the Olympics itself, as one of my standouts after 15 years of top level athletics,” says Johan. “It was the first time I really experienced a packed stadium, and living in the village for a few weeks. If any athlete could die and go to athletic heaven, it would be just that!”

Back then, Johan did well to make it to the semi-final round, eventually finishing 21st overall, which was an admirable result coming so soon after his 2001 African Junior Championship win in the 4x400m relay as well as his first big victory a year earlier at the Commonwealth Youth Games in the 800m, where he earned gold in 1:51.32. After Athens, however, Johan became a prominent regular at meets all over the world, and that culminated in him finding his best form in 2013, when he brought home the bronze medal in the 1500m from the World Champs in Moscow, thanks to a 3:36.83 finish. That was a year of PBs, too, with a 1:45.64 finish in the 800m, as well as cutting his 1500m best down to 3:31.93. Then in 2014 he clocked a 3:50.70 finish in the mile, and at the Glasgow Commonwealth Games he only just missed out on the podium with a fourth-place finish in the 1500m.

Now he has his eyes firmly set on the 2015 World Champs in Beijing later this year, currently competing on the European circuit to help push him to faster times, and then it will be on to the Rio Olympics next year. “Right now I’m testing my speed and the boiling point will be the World Champs in the next few months,” says Johan. “You really can’t guarantee fast times from May until August, so you have to manage when you reach that maximum level.”

In The Genes
It’s no surprise Johan took a liking to athletics. Both parents were Springbok athletes, with mom Sarina setting national records in the 800m, 1000m, 1500m, Mile and 3000m, and also running the fastest 10km in SA on the road in 1980. Father Danie was also a celebrated athlete, competing in the green and gold in the 3000m steeplechase in the early 80s. “I chose my running before rugby in grade 10 and continued from there,” says Johan. “I’ve always had that mind to reach the highest accolades. By choosing to focus on my running, I was committing myself to get to the top level.”

Today, Johan feels fortunate to have family with the know-how in the sport giving him coaching and advice along the way. “Both my parents cycle beside me on my long runs, so they’ve always been an amazing support through the years. Also, without my wife Claire, training would be difficult. She got up most nights with our son Daniel when he was born two years ago, so I could sleep and recover, and luckily she understands my schedule and travelling.” It’s an interesting balance Johan has figured out after his years of competing on the track, focusing on keeping a certain amount of fitness while not going all out in pre-season. “You can’t back off early because that will knock your confidence,” he explains, “so I think that’s a positive of being an older guy. You plan easier. Which is a big change from Athens!”

Planning the Attack
Looking towards the crunch at World Champs, Johan is building his speed by racing 800m more often this year and looks poised for a new PB as he builds up to Beijing, and then Rio. “The Olympics come once every four years, so if everything connects, I will be ready for the 1500m. Now I want to break 1:45 in the 800m and get close to 3:30 in the 1500m, and I will do everything I can to improve!”