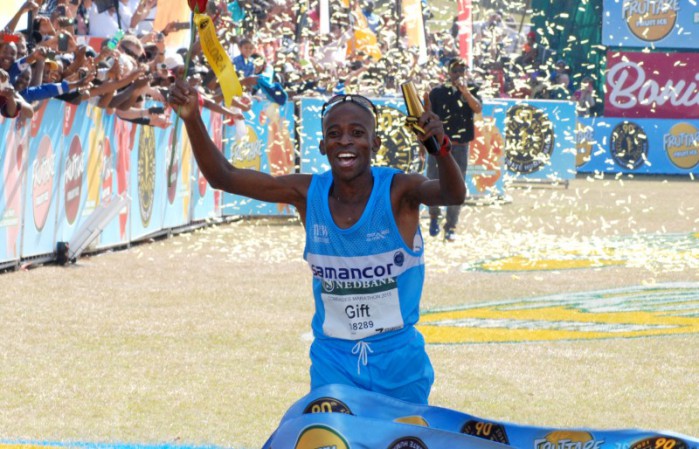 With three gold medals to his name, including a third place last year, Rustenburg policeman Gift Kelehe was one of the pre-race favourites to take the 90th edition of the Comrades Marathon – and he was happy to tell everyone that he would do it, too. Gift’s sensational win in 5:38:35 was thus not only vindication of his pre-race confidence, but also a historical first of two brothers winning the world’s oldest and biggest ultra, with older brother Andrew having won the Comrades in 2001. – BY LAUREN VAN DER VYVER

With the familiar strains of Chariots of Fire playing and the chanting crowd at the Pietermaritzburg finish cheering him in, Gift Kelehe soared over the line with arms outstretched to a history-making win in the 2015 Comrades Marathon. One of the first to embrace him was older brother Andrew, winner in 2001, and then the younger Kelehe still had enough fuel in his tank to do 10 celebratory push-ups in the home stretch, with the stadium announcer and crowd counting with him. It was a dream realised, says the winner. “I just had a feeling I would take it this year! Looking back, with a fifth place in 2011, eighth in 2012, bailing in 2013 because of a stress fracture, then coming back and improving with third in 2014, I knew a better position was in me.”

With about 25km to go, Gift took the lead from eventual runner-up Mohammed Hussein of Ethiopia and opened a substantial gap over all the chasers. At the top of Polly Shortts hill, he knew the victory was in the bag, and with final instructions from long-time coach John Hamlett, Gift maintained his pace to claim the win. “As I approached the finish, I saw people running to the stadium from their houses, or leaving their cars in the road. The minute I reached the stadium, it was electrifying, with people banging on the side walls. This was my dream race!”

“Taking the 90th edition of the race was special, and the fact that my brother won in 2001 and now I also have the title, that is history. The support from my coach, brother and sponsors has been unbelievable. I remember Andrew being with me when I didn’t finish in 2013, and he told me that it wasn’t the end of the world, that I must train harder and that I will be back. He was right.”

Strategy Sounds
Following his comeback third place in 2014, Gift started training for the 2015 edition as early as October last year, doing the base training that he and his Samancor Chrome Marathon Club teammates usually did in January in previous years. He still had to wake up early each morning to fit in his training runs before heading to work for the SAPS, where he is part of a specialised tactical response team in Rustenburg, and then in the evenings he’d change out of uniform and go for another run. By April, he was clocking 250 to 270km a week, and spent time with the team in Dullstroom to prepare in high altitude conditions. That’s also where a few race-day strategies were worked out for better communication between Gift and his coach for running in the bunch.

“I had to simply sit with the guys, not doing the work for them, so Coach had a whistle he would blow and that’s how we’d communicate, so I’d know when to slow down,” explains Gift. “Last year we made a mistake where Coach shouted an instruction to me and I didn’t hear him, but Ludwick Mamabolo heard and he backed off, because we were fighting alongside Stephen Muzhingi. This year, the whistle was something only I knew, and I could always hear it. The guys were confused – Coach would blow the whistle, they would look at him, then look at me and wonder what’s going on!”

Winning Focus
Gift’s introduction to the bigger distances was realised as a 20-year-old when he played second to his brother’s 2001 winning effort. At that stage, Gift was a middle distance athlete who was encouraged by John, who had been working with Andrew since 1989, to work with the team at speed work drills before the Big C. When Andrew took the title, a proud younger brother wanted to emulate that achievement. “I wanted to be a champion like him, I needed that feeling.”

The plan now is for the team to go back to the drawing board in the next two months, with a back-to-back win the main focus for 2016. “I like making history, so another win is in our minds,” says Gift. “I think my experience counts for a lot, and with the women’s race, too, South Africans are ready to start a trend where we locals win it. I think we can make the race ours for a long time.”

Unsurprisingly, there is little ‘down time’ for the new champ, with interview upon interview, being paraded through his home village of Taung Sekhing as well as being honoured by the provincial legislature, but Gift is happy to embrace it all. “What a response it has been! People have recognised me in the street and I hope I can keep my win in the community.” It’s also something to hear that the humble 33-year-old didn’t waiver from the team’s traditional fartlek session the day after his phenomenal win. “I’d never skip that! It loosens my legs and helps with recovery. And it feels better after a win, too…”