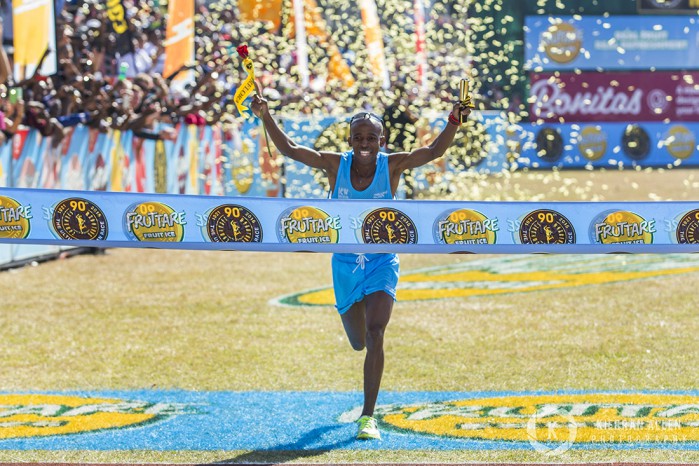 Following his recent Comrades 2015 win, Gift Kehele has a new target in sight; to conquer South Africa's iconic Table Mountain by racing the 100km Ultra-trail Cape Town (UTCT) on 3 October. The route embraces various technical terrains and includes a total climb that is more than a Mt Everest ascent.

Trail running has seen major growth in the last decade, with notably increased interest in the 100km to 100-mile races, in which Europeans and Americans seem to dominate. “We are very excited from a South African perspective to see the likes of Gift wanting to run ultra trails,” says UTCT race director Nic Bornman. ”Beyond our own event, we want to find and launch South Africa's best talent into an ever more competitive international landscape. The word development springs to mind, but if you look at the South African performances at this year’s Comrades, it is clear that our runners need more exposure, rather than development. The talent pool runs deep.”

After winning last year’s UTCT in 10H41, Eric Ngubane said he believes it is possible to run the course in under 10 hours. “I just need to be pushed,” he added. Says Bornman: “To be honest, it’s hard to predict what the guys are capable of these days. Each year, mountain ultras are increasing in popularity and with the crossover from other running disciplines, the bar keeps being raised higher and higher. We are excited at the possibility of the elites going under the magical 10-hour mark.”

Kehele is quite aware of the difference between Comrades and a race like UTCT. “I have heard it’s a tough but beautiful course, so it will be a good challenge for me. Mountain running is quite different to the races I usually do, so I am excited about going to Cape Town and giving this one a shot.” His coach, John Hamlet, is confident that Gift will be ready. “Changing the game from road to trail makes for fresh thinking, and the training we do in Dulstroom is really trail running. Determination and commitment are a daily norm.”

This year Ngubane returns to defend his title as he toes the line with Kehele and Jordanian desert running specialist Salameh al Aqara. Some of the other men’s hopefuls are Andrew Hagan, Jock Green, Christiaan Greyling and Nic de Beer. The women’s field is also shaping up as one that will be too tight to call, with Sally Mcrae (USA) and Stephanie Case (Canada) set to line up with Landie Greyling and Linda Doke, both racing UTCT for the first time, along with last year’s first and second place finishers, Nicolette Griffioen and Chantel Nienaber.