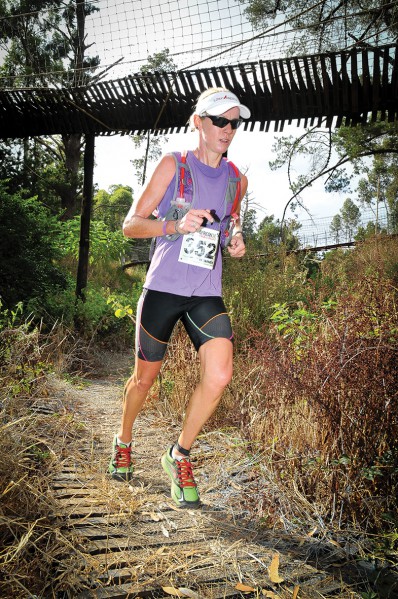 For 20 years, Yolande Maclean has been a prolific name on the road running circuit, notably for her Comrades gold medal runs, but a knee injury six years ago put the brakes on her running for a while. Now her hunger to compete has brought her back firing, and she chats to Modern Athlete about new experiences as an athlete and her promise to embrace every opportunity.

When Yolande won the mixed team category of this year’s Pronutro AfricanX Trailrun presented by New Balance, alongside Team CW-X Ultraspire running partner Nic de Beer, she says she learnt a few things along the way: That she was tougher than she thought, but that trail is unforgiving. “We were the first mixed team and seventh overall, beating the likes of Landie Greyling and Carla van Huyssteen! It was my first stage race and it was a new challenge and that’s why it was an easy decision when Nic contacted me,” she says. “You have to deal with the technical parts, monitor what you eat and be aware of teams chasing you, but luckily there was such an easy flow between Nic and me.”

The effortless introduction to trail comes after a spectacular start to Yolande’s year on the road. Having finished second in the Dis-Chem Half Marathon in January, March saw her crush the course record by 11 minutes at the Johnson Crane Marathon, clocking 2:46:56. She followed that up with another win at the Sasol Marathon a week later, crossing the line in 2:46:51. While she was aiming for a top-10 finish at last month’s Two Oceans, she managed a well-deserved 11th place in 4:09:52 after struggling with sciatica pain in her leg the week before the race. “Six years ago, I tore a muscle in my knee and that was me out for six months. It’s taken a while to build up again, but I figure if you’re a true athlete, that hunger to be back never dies. Just like at Oceans, when I was at 26km I thought I’d bail, but then I thought I’d take Ou Kaapse first and see. While I was in pain, I knew I had to make peace with it and just finish!”

The Ultra Bug
Unsurprisingly, Yolande’s hunger to compete started at an early age. At school she ran the 100m, 200m, 400m and 1500m, cycled, played soccer and did a few triathlons. “What really got me going was my uncle and dad, because they were sporty. I eventually started running 10km races with my dad, and he beat me and teased me, so I wanted to improve,” she says. She stepped it up to longer distances and suddenly Comrades became a must. “My dad had done it and I was ready at 18, but after some injuries from cross country, I had to wait. Finally, at 25, I ran my first Comrades. Then it was onto Oceans and Loskop, which I won on my second go in 2003.” To date, Yolande holds five Comrades golds (6:29 PB) and four Two Oceans golds (3:47 PB), but admits that the desire to do it all back then was perhaps a stretch too far for someone so young. “When you’re pumped up like that, you don’t hold back, and the wear and tear showed.” That’s when her injury struck and she was forced to start over.

“I started to slowly run again and do it for fun. I implemented strength work, concentrating on my arms and core, and mountain biking became a great off-switch from running, which is high-impact stuff, so you need a break.” Then in 2013, she entered the Jeep Warrior Black Ops Race and tore ligaments in her foot, so she turned to cycling to regain her fitness. That took her to the start of the 2013 RAC Tough One, which she conquered in 2:09, but she knew there was a lot to improve on. “I figured I’d target the 2014 Loskop to see where I was and ran a 3:23 to come second. That was great, because I hadn’t been there for years, and I went on to break my time at Deloitte – a 2:50 from a 2:55 finish – and knew I was in form.” Then, having finished second at this year’s Dis-Chem Half, she decided that the ultras were on again.

“Johnson Crane was a last-minute decision but I felt good enough to go for the win. Same with Sasol. At the end of last year I promised I’d agree to every opportunity that came my way, so when the Discovery Surfer’s Challenge invited me, I went for it – even in winds of 17 knots!” It was also her start at Born2Run Athletics Club last year that brought her to an environment where she felt like she was part of a family. “Ann and David at Born2Run are great and I get a lot of support. My running is on me, though. My parents divorced years ago. At 16, I got my learners and had two jobs over the weekends to get pocket money. At 18, I got my Gran’s old car and got my own car eventually, and my mom has always helped me, but I’ve always had to be independent and self-driven.”

A Bright Future
After all these years, Yolande says she has also learnt when to go ahead and when to hold back. “People panic when others pass them, but I’ve learnt to stick to my own plan and be confident. At AfricanX, I used that, and I would love to run more stage races in the future!” And following a disappointing result at Oceans, she’s motivated to tackle it with more emphasis next year, while she’s still pondering about this year’s Comrades. “I’m entered and will make a call soon,” she says. “You have to take on Comrades when you’re 100%. It’s so special, and if I’m not running, I’m usually watching with a big knot of nerves and excitement in my stomach!”

She’s also planning to keep her promise to herself to embrace the unknown, and so she has plans to do both trail and MTB stage races, but also wants to chase down a 2:40 marathon this year while bettering her shorter distance times. There’s also talk of taking on Ironman sometime in the near future. “I want to try new things, otherwise it’s boring! My injury never let me down because running keeps me alive, and that fire never dies. It makes me a better person!”