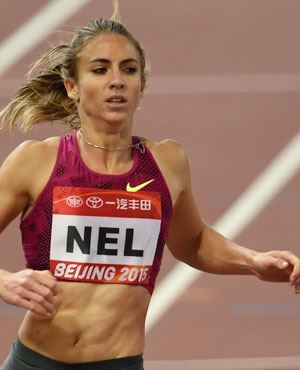 Wenda Nel opened her international campaign at the IAAF World Challenge in Beijing on Wednesday by winning the 400-hurdles in a new personal best time of 54.37s

The Tuks/hpc-athlete’s winning time was 0.45s faster than her previous best time of 54.82s which she ran in Marrakech, Morocco, last year. It is the fifth time that she has managed to run a time faster than 55 seconds. Myrtle Bothma (53.74s –1986) and Surita Febbraio (54.05s –2003) are the only other South African athletes who were able to run faster times.

Nel timed her race to perfection. Lashinda Demus (USA) led the race for the first 200 metres but Nel took the lead at the second last hurdle.

Tiffany Williams (USA), a former Olympian, finished second in 55.22s, with Demus third in 55.86s.
Just before she flew out to Beijing on Sunday, Nel was confident of running a fast time.

“My training went well and I can feel in my legs that I am capable of running a good race. But I am not going to pressurize myself by becoming obsessed with running fast times. I know that if I can stay focussed and do the small things right a fast time will happen.”

Nel, who was a finalist at last year’s Commonwealth Games in Glasgow, has set her sights on reaching the finals of the World Championships in Beijing as well.

“I know it will require much hard work and huge sacrifices to do so, but it can be done.”
According to Nel, her approach will be somewhat different if she should get another opportunity to represent South Africa at the World Championships or at next year’s Olympic Games in Rio.
“I have learned that it is important not to allow people’s great expectations to get the better of you.”
Nel is going to be quite busy over the next 25 days. She is planning to compete in Ostrava on 26 May, which will be followed by meetings in Prague (8 June) and Rabat (14 June). However, there is a possibility that everything could change because she is shortlisted to compete at the Oslo Diamond League Meeting (11 June). She is also playing with the idea of maybe competing in one 400m race while she is based in Germany.

Khotso Mokoena finished second in the triple jump with a distance of 16.67m. Cuba’s Alexis Copello won with a jump of 16.70m.