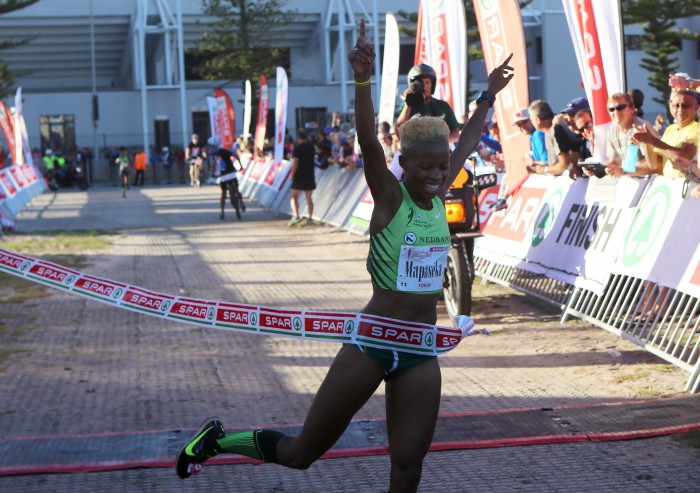 Bouncy Mapaseka Makhanya has retained her position at the top of the SPAR Grand Prix ladder, despite finishing eighth in the second Spar Women’s 10km Challenger in Port Elizabeth on Saturday.

Phalula’s twin sister, Diana-Lebo, won the Port Elizabeth Challenge, but she was unable to run in Cape Town, because she was representing South Africa in the world cross-country championships in China that weekend. She is in sixth position with a total of 20 points, and has some way to catch up with runners who competed in both races. Last year’s Grand Prix champion will be ruing her failure to break the record, which would have earned her bonus points that would have pushed her up the ladder.

The Kalmer sisters, Rene and Christine, are in third and fourth position, with 33 and 30 points respectively, while Cornelia Joubert is in fifth position with 29 points.

Two times winner of the Grand Prix, Irvette van Zyl, who is in joint eighth position with Thembi Baloyi, on 18 points, will be particularly delighted with her position. Van Zyl is expecting a baby in September, but says she wants to run as long as is possible.

Makhanya won the Grand Prix in 2013, but had a quiet year in 2014. However, she made it know that she wanted to reclaim the title this year, and will make every effort to run all five races.

The Grand Prix series was introduced in 2007, and has become South Africa’s biggest and most prestigious women’s road-running series. The top runners in the five Challenge races held around the country earn Grand Prix points from each race. The 2015 winner will pocket a cheque for a whopping R150 000. The second prize has been increased by R20 000 to R50 000, and the third prize is now worth R30 000. There are cash prizes for the top 15 runners on the points table, making it worthwhile for runners to compete in all five races.

The next Challenge race is in Durban on June 7.