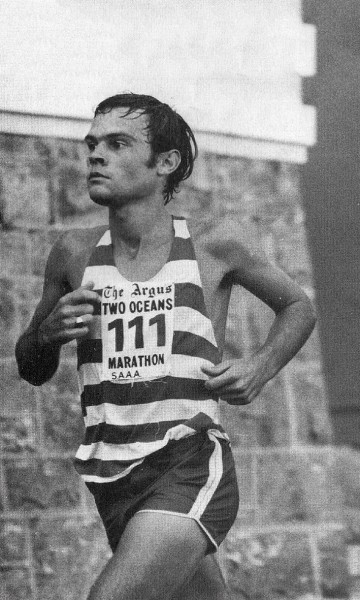 Only two athletes have ever won both of South Africa’s premier ultra-marathons in the same year. The one was Frith van der Merwe in 1989, the other was Derek Preiss, the man from Durban who managed the feat not once, but twice, in 1974 and 1975, aged just 21/22. However, just four years later he had retired from running…

When the Westville Athletic Club held it’s 40th anniversary dinner in April last year, one of the VIP guests was former founding member Derek Preiss, now 62, the only man ever to do the Comrades-Two Oceans double, and yet it was only the second time he had been back to the clubhouse since retiring from the sport in his mid-twenties. “I stopped running when I was still very young because I got stone bored with it, and I have been uninvolved in running for decades now. They had to really rope me in to go to the club’s 40th, and I only agreed to go when I heard Derek Kay was going to be there,” says Derek. “Back then I lived for running, but as much I grew to love it, so I later grew to hate it. I have fond memories, but no regrets. I turfed out all my memorabilia, so there is nothing in my home that indicates I ever ran, and I don’t think back to those days that often.”

Comrades Dream
Derek got into running thanks to his father, Richard (Rick), who started running at 50 to regain his fitness. When he ran his fifth Big C in 1971, Derek ran with him, having trained for the race in Bloemfontein whilst doing his military service, and they finished together in 9:32:20. “I actually did everything wrong in that first Comrades. The night before, my Dad said he was battling with his shoes, so we swapped shoes, and halfway through the race we had to swap back because we both had blisters! For years we laughed about that ridiculousness!”

The following year Derek finished 32nd in 6:49:48, and in 1973 he went after a top 10 placing, coming home eighth in 5:54:35. “From there, I decided I wanted to win the race, and everything was geared towards that,” says Derek, who raced Two Oceans for the first time in 1974 and won it in 3:21:40, then took Comrades honours in 6:02:49. A year later he was back to defend both titles successfully, winning Oceans in 3:22:01 and Comrades in 5:53:00. “I ran very differently to most runners: I did high mileage and ran everything flat-out,” he says. “Sometimes I ran four races in a row and won them all, which would be frowned upon today, but somehow it worked for me.”

Injury and Retirement
Next Derek was invited to go race the London to Brighton ultra in the UK, but turned down the sponsored trip to focus on chasing a third win at Comrades in 1976. However, he finished third at Two Oceans (3:22:44), having suffered a hamstring strain mid-race, and that was still bothering him at Comrades, forcing him to settle for 14th position in 6:10:00. Soon after that he decided to retire from running. He did make a brief return in 1982-1983, adding two more silver medals to his Comrades collection, but he had very much outrun the running bug by then. He also got married to Debbie in 1983, and says that initially she didn’t know about his running history. “She had no idea who I was in running terms, but we were going to a cross-country race in Pinetown and I figured I should tell her, so I got out old photo albums and showed her when I won Comrades. She had actually seen me on TV in old footage of the Train Race, but didn’t twig at the time that it was me!”

The couple have two sons, Gareth (27) and Matthew (23), and Derek will be retiring at the end of this year after 45 years working for Transnet. He still walks for fitness, with the odd jog thrown in, but that is as far as his running ambitions stretch. “When I was running, most guys were 10 years older and I could see how they had to balance family and work with their running. I think that predisposed me to not want to continue running forever, but I will never forget how it felt to take the lead in the Comrades as a lightie of just 21 years. Still, the real highlight was those early morning runs with Dave Rogers and Chris Hoogsteeden on Cowies Hill… I felt so strong, so fit, like nobody could challenge me, feeling on top of the world.”