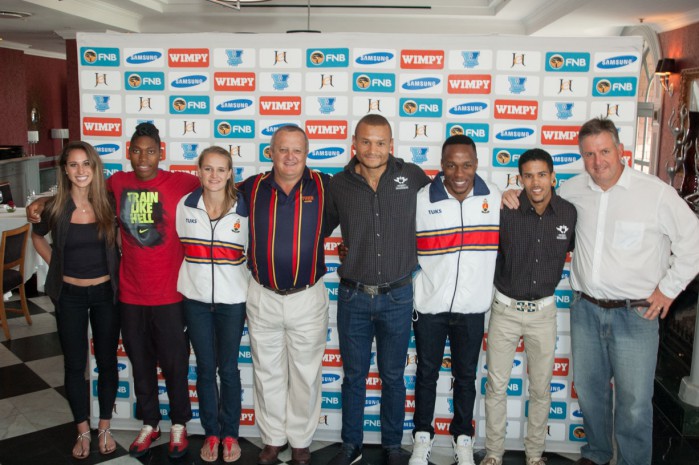 The next edition of Varsity Athletics is just a few days away (Monday, 20 April) and the anticipation is rising for the Sportainment event of the year to hit the student town of Stellenbosch. As usual, the event will be broadcast live on SuperSport 210 from 18h00 and fans can expect some off-the-track action to coincide with fireworks on the field.

Kiss Cam, Steamy, Selfie and Down-Downs will all form part of off-the-track action while there is plenty to look forward to for the athletes taking part.

Tuks are currently in first position after earning 127 points at the first meeting in Potchefstroom in March. They are closely followed by NWU-Pukke on 117 points while the University of the Free State is in third place with 89 points. For the other competing universities – UJ, Maties, TUT, NMMMU and UWC, it’s a tense battle for points.

Individually, Tuks' Akani Simbine earned the Victor Ludorum for most points in the men's events while Justine Palframan from Maties earned the Victrix Ludorum in the women’s events.

Simbine won the 100m at the first event and is hoping to go even faster this time around when he goes up against his rival Simon Magakwe, from Pukke, in the 100m. In the 200m, Simbine lists Gideon Trotter, Wayde van Niekerk and Anaso Jobodwana as his biggest rivals.

“My main goal for this year actually is to just break that ten second barrier. I feel like it is a bit too soon to break it because we only just started on our maximum speed work. Once that kicks into my body then I think I can do the sub 10,” he said.

His training regime is currently focused on speed, endurance and acceleration, just like Maties’ Palframan. Palframan won the 200m and the 400m, but hopes to perform even better when she runs on her home turf in the next meeting while going head to head with her biggest rival, Melissa Hewitt.

“I wasn’t really happy with either of my times (in Potchefstroom) so it was just a stepping stone and I realised what I have to fix. For the 200m I finished strong after doing the 400m. It was tough but it was a good training session. I am hoping for my personal best at the next meet,” she said.

Caster Semenya is another familiar face who will be present at the meeting next week. Semenya won the 1500m event and put in an impressive performance in the relay at Potchefstroom and the Olympic medallist is looking forward to yet another outing.

“I just want to achieve my best performance on the day, particularly now that my injuries are behind me. But most of all I want to entertain people, for excitement and to have fun.”

“I don’t really have any one rival. Every competitor is a rival because you never know what the other athletes will achieve on the day and you should never underestimate anyone. It’s always best to run your own race.”

Returning from a long absence has been a catharsis for the track star and along with her new coach Jean Verster, she is taking training steady.

“Right now everything is just going really well. We have a fantastic team chemistry. But it’s important to be patient and listen to your body,” Semenya added.

The evening at Maties will feature 18 different events. The meeting will be conducted under the rules of IAAF and ASA and athletes earn points for their team according to where they are placed. There are nine points available for first place in each event while second place earns seven points. Thereafter, the value of each place decreases by one point up to eight, which is worth a single point.

If there is a tie for first place in any of the field events (except high jump), the athletes who are tied will get an additional trial.

In the case of a tie for any of the other places by two or more athletes the points for such places are added up and divided by the number of athletes involved. For the high jump, the standard IAAF jump off rule will apply for a tie in the first place. Athletes are allowed to take part in two events, excluding the relays.