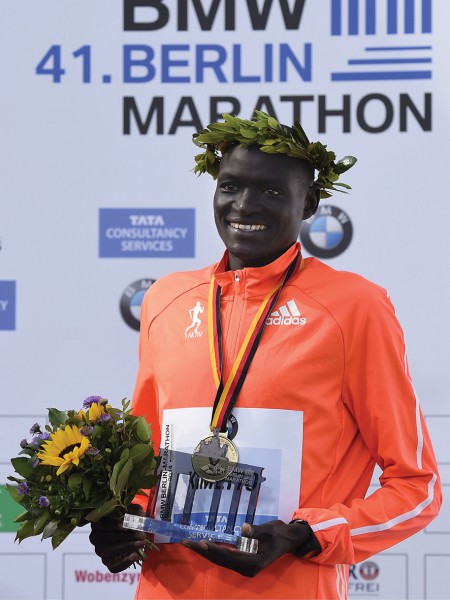 The men’s marathon world record has come a long way in the last 100 years, but now the question on everybody’s lips is whether anyone can dip under the two-hour mark. Yes, say a group of leading sports scientists from all around the world, and hopefully soon, too.

In 1908, the first time the standard distance of 42.2km was run at the London Olympics, the world record was set at 2:55:18 by American John Hayes. (The race was actually won by Italian Dorando Pietri in 2:54:46, but he was famously assisted by race officials after collapsing several times on the track, and was later disqualified.) By 1925 Albert Michelsen of the USA had broken through the 2:30 mark, and the first sub-2:20 was posted in 1953 by James Peters of Great Britain, followed 14 years later by the first sub-2:10, by Derek Clayton of Australia. The next 21 years saw just five new marks set, culminating in Ethiopian Belayneh Dinsamo’s 2:06:50 in 1988, and that record then stood for more than 10 years, seeming unbeatable…

However, in 1998 Ronaldo da Costa of Brazil got the record ball rolling again, and the next ‘barrier’ to go saw Kenyan Paul Tergat clock 2:04:55 in 2003, and then his great rival, Haile Gebrselassie of Ethiopia, took the record one second below 2:04 in 2008. After that it was all Kenya: Patrick Makau of Kenya clocked 2:03:38 in 2011, followed by Wilson Kipsang’s 2:03:23 in 2013, and then Dennis Kimetto set the current world record of 2:02:57 in September 2014 at the Berlin Marathon. And after every one of these records was set, the whole debate about whether any man can still go faster was argued all over again – and whether the two-hour barrier will ever be broken. Some reckon it is only a matter of time, while others say that the human body is simply not capable of doing it. But then, that’s what they said about the four minute mile back in the 1950s, and today the mile world record stands at 3:43:13!

Now there is an international group of scientists heading up the Sub2hr project, the first dedicated international research initiative made up of scientists, athletes and industry partners, who are pooling their resources and expertise with the aim of achieving that magical first sub-2:00. Launched in December 2014 and led by Professor Yannis Pitsiladis of the University of Brighton, the group includes former marathon world record holder Haile Gebrselassie as well as Cape Town’s Professor Andrew Bosch of the Sports Science Institute of South Africa. (He also coaches top SA female marathoner Tanith Maxwell.)

“We believe that left to the current situation, the world record will just carry on improving little bit by little bit, and maybe in 20 to 30 years a sub-2:00 may become a possibility. However, our project hopes to fast-forward the process, by making the best science, medicine and technology available to targeted athletes, and help them get there sooner,” explains Andrew. “We’re going to try to adopt a Formula 1 mentality in marathoning: Throw enough money at it until you can go as fast and possible! Even if that is not sub-2:00, we at least hope to see a big jump in the record, and show how science and medicine can contribute to running progress.”

Andrew explains that the plan is to spend the first year putting the infrastructure in place to generate funding and getting the various sub-sections of the project established. “For example, I am involved in the nutrition package, and the other packages include biomechanics, training, psychology and anti-doping. The programmes developed will be tailored to the specific needs of the athletes we identify to be part of the project, and we will look at current world leaders as well as the emerging next generation, so we may see somebody currently running 26 minutes for 10km and identify that athlete as a potential world record marathoner of the future.”

That all said, one athlete who will not form part of the study but who will still be very much involved is Haile Gebrselassie, who is not only a close personal friend of the study leader, but is very much behind the project, says Andrew. “He is keen to see the two-hour barrier approached, if not broken, and he told us his only regret is that this project didn’t happen long ago, so he could have had a go at the barrier!”

For more info on the project, go to www.sub2hrs.com

Kimetto Can
Having run the fastest marathon debut in history when he clocked 2:04:16 in the 2012 Berlin Marathon, Dennis Kimtto then went on to break the world record in Berlin in 2014, lowering the mark to 2:02:57.

MA: Last year in Berlin, were you chasing the record, or was the win your first priority?
DENNIS: I went there to win the race, but when I reached 25km and saw the time on the timing car just in front of me, I said to myself, this can be done. I felt like I could break the record, because in Chicago I tried but didn’t succeed, running 2:03:45. So from there, I started pushing, but I was still surprised when I finished and saw I had not only broken 2:03, but taken 26 seconds off the record!

MA: No doubt everybody keeps asking you about the record and if you can go faster?
DENNIS: Many people ask me, so you’ve broken the record and gone under 2:03, now can you break it again, and even go under two hours. I think that is possible, because they give me enough faith to believe in myself and think I can still do it.

Wilson Wants it Back

He saw his world record tumble just a year after he had set it, but 2:03 marathoner Wilson Kipsang says that just motivates him even more to reclaim it.

MA: How did you feel about losing your world record?
WILSON: I really didn’t feel disappointed, because records are meant to be broken. I took the record from Patrick Mackau and now Dennis has taken it from me. It’s a positive challenge to me, to try to run faster than his time. I think I can run at least a 2:02:30.