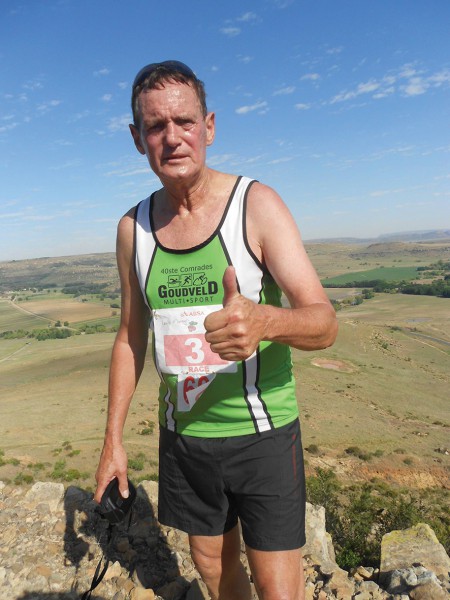 If everything goes according to script, the finish of the 2015 Old Mutual Two Oceans Marathon is going to herald one especially amazing finish when 64-year-old Louis Massyn comes home to not only claim his 40th Two Oceans medal, but also become the first athlete to complete both the Oceans and Comrades ultras 40 times. And there’s no sign of him stopping there, either.

Having run his first Comrades in 1973, Louis Massyn undertook his first ‘voyage’ at Two Oceans in 1976, and he can still remember the details. “My ticket to fly down to Cape Town from the Free State cost R47, and when I went back on the Drakensberg train, the ticket cost R45. I still have both tickets in my scrapbook,” he says. “The race was very small back then, just over 300 runners, and I can still remember that I ran in race number 118 and Alan Robb was wearing 119. It was raining that year, and when we started on the rugby field inside the Brookside sports grounds, there was a hell of a bottleneck at the gate to get out. As the years went on and the field got bigger, the start moved to the road outside the grounds. Now it’s so big that we have to finish up at UCT!”

This year, Louis and Tony Abrahamson should become the second and third runners to earn their ‘Quadruple Blue,’ joining Noel Stamper (41 medals) in the Two Oceans 40 Club, but Louis will add another remarkable record to his name when he becomes the first athlete to finish both of South Africa’s premier ultras 40 times. He is currently on 42 medals for the Comrades Marathon, tied second on the ‘Big C’ list. His Two Oceans medal haul consists of six silver, 31 bronze and two blue medals, and he can boast an impressive PB of 3:41, which he ran in 1981, and he says his 3:57:30 silver in his tenth Oceans remains one of his favourite running memories. However, it is the silvers he missed out on that he remembers more clearly. “In 1988 I missed that four-hour cut-off by less than a minute, and I never ran another silver after that, so I remember it for all the wrong reasons. But other than that I only have good memories of Oceans, and that’s what keeps me coming back year after year.”

One Heck of a Sermon!

It all started in 1972 when 22-year-old Louis was sitting in the Anglican Church in Odendaalsrus, listening to the Bishop of Bloemfontein comparing confirmation to the physical nature of the Comrades Marathon. “It slowly dawned on me that I had to run the Comrades Marathon. Not later in life, but now,” says Louis. “At the time I was working for Ford in the motor industry, so I got one of our dealers in Durban to organise me an entry form, and then my mom offered to buy me my first pair of running shoes, so of course, I went to the sport shop in Welkom and chose the most expensive adidas pair, for a whole R23! The guy selling them to me still said, ‘Pal, you know how far Comrades is? You need at least two pairs of shoes!’ I thought about that while travelling to Durban by train, so a few days before the race I went and bought a R4.99 pair of no-name brand shoes, and then I decided to run in them, to save my expensive ones.”

Louis duly finished that Comrades without any problems, but he admits the race was tough. After all, it was his first ever race… he didn’t run anything shorter to build up to the 90km ultra! “I can remember it like the palm of my hand. I didn’t know what the black stuff was that the other runners were drinking, so asked my seconds to ask them, and found out it was Coke. So I bought myself a few tins along the route and also drank Coke.”

Years later he was back, this time in his adidas shoes, and since then he has not only changed brand, because he says the adidas shoes have always fitted his feet so well, but he also kept every single pair he ran in. “I always said I would build them into a bar counter, but that never happened. Instead, the guys at adidas had a huge perspex 40 display made when I ran my 40th Comrades and mounted all my shoes in it, and that is now on display in our Goudveld clubhouse in Odensdalsrus. Since then adidas has sponsored me as well, and I am very grateful for that.”

On the Road Again

Louis lives in Odendalsrus with wife Rita and for the past 10 years has worked as a medical rep selling Drawtex, a locally produced absorbent dressing for wounds that works on a similar principle to moisture-management sports clothing. It means he is on the road a lot, travelling all over the country, but he doesn’t let that stop him from running. “I make time to run, and enjoy running in different places and meeting new people.”

Looking ahead, Louis says he has no intention of hanging up his running shoes any time soon. “My goal is to run until my body will no longer carry me – totdat my bene stompies is – and they’re not stompies yet! I would eventually like to have the most medals in both races, but I’m just taking it one year at a time and enjoying my running. We have a great camaraderie amongst the 40 Club runners, and always support each other, so it’s just an honour to be amongst such great runners.”

In terms of the unofficial world rankings for years participating in ultra-marathons, Louis is currently ranked 17th after 42 years of running, and will move up to 12th position after the 2015 Comrades. (That list is still headed up by the late Wally Hayward, who first ran the Comrades in 1930 and then ran his last one 59 years later!) But when you look at the combination of medals earned in the Two Oceans and Comrades, then Louis jumps right up to the top of the rankings.

* All medal tallies taken before the 2015 editions of the Two Oceans or Comrades.